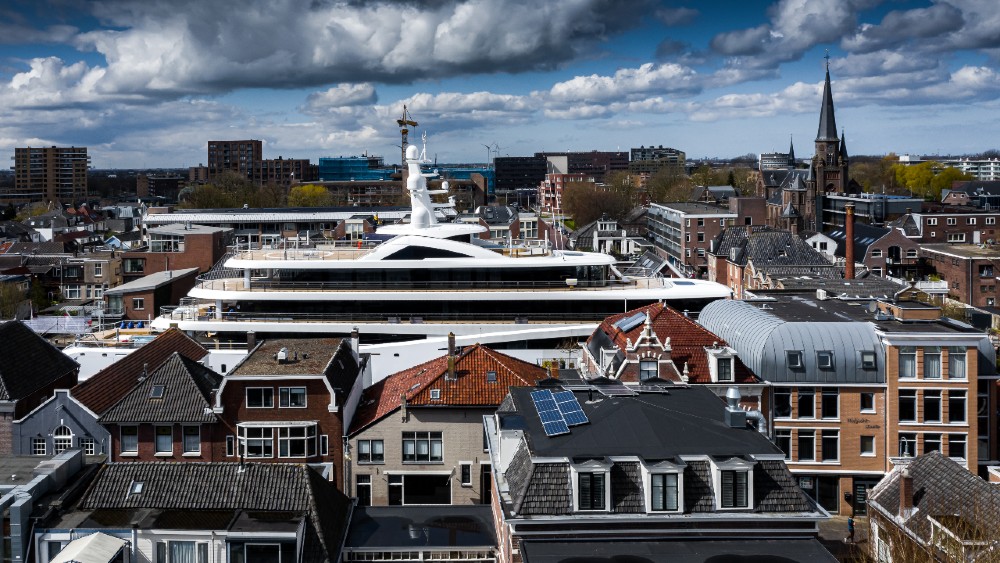 The world’s largest superyachts don’t just end up in glitzy ports like Monte Carlo or St. Tropez. They’re often built in shipyards that aren’t near the ocean. As superyachts have been getting ever larger, the logistics for getting them to sea have become more challenging. After three to four years of being built in the yard, the delivery is the last nail-biting part of the shipyard’s journey. The floating palaces are moved by canal, river and road. They travel under bridges, through small villages and on country roads—sometimes with just inches to spare.

Nearly a football field long and forty-five feet wide, Project Viva was just a few feet narrower than some parts of the canals. The 88-foot-high vessel dwarfed the three-story homes, buildings and windmills that lined the journey. But as bonkers as the images seem, the custom yacht builder is not the only yard to have to rely on such incredible delivery routes.

Van Oossanen told Robb Report: “Each superyacht is only delivered through the canals once and I like to be present to witness it.”

The largest Feadship to ever pass through the canals is 333-foot Symphony, but Project Viva is the longest Feadship that Van Oossanen has filmed completing the route. Because of her size, Viva needed to be lifted onto pontoons aft and forward and navigated by tugboat to prevent her from getting stuck in the mud.

“It took a whole day just to get her onto pontoons,” says Van Oossanen, who followed the boat for three days all the way to the narrowest section of the canals at Gouda. “At times, it took an entire hour just to pass under one bridge.”

Heesen must travel by river at low tide. Even then, it’s so close that crew can reach up and touch the bridge overhead.  Courtesy Heesen Yachts

Fellow Dutch shipyard Heesen also transports its yachts via canal, from its facility in Oss to the North Sea, where the boats undergo sea trials. The route passes under 11 bridges that are so low they require the yachts to have their masts removed. The operations can only be carried out at low tide. The Heesen delivery crew can touch the underside of the bridges as the yacht passes beneath.

But not all amazing delivery journeys are determined by a shipyard’s location. Sometimes it’s the destination. When Abeking & Rasmussen set out to deliver the 245-foot superyacht Elandess from its German shipyard, it was the owner’s express wish that it be to London’s River Thames.

“Our project manager André Jonker, together with the crew, sailed the yacht from Bremen to London and handed her over to the owner at her berth in the heart of London,” marketing manager Verena Henk told Robb Report. “Just before Elandess reached her berth, the superyacht Aviva happened to be moor directly opposite. It was incredible to see.”

The 220-foot Apoise traveled for five hours from the Lürssen shipyard through rural waterways to reach the ocean.  Courtesy Lürssen Yachts/ C. Groll

Lürssen’s yachts also travel by river from its facilities in Bremen and Rendsburg. “The trip from the Bremen yard to the North Sea takes four to five hours,” Sylke auf dem Graben, head of marketing at Lürssen, told Robb Report. “On the Weser River we’re not restricted in length or breadth, but the maximum height is 187 feet, due to high-voltage lines that cross overhead.”

Auf dem Graben says that voyages from its other shipyards in Rendsburg and Bremerhaven often involve fans. “Along the Kiel Canal, there are multiple spots for enthusiasts and locals who use the jogging tracks to see the yacht go by,” she says.

Navigating a yacht by canal is challenging, but at least the boat is in the water.  UK builder Fairline transports its yachts by road. The route takes the vessels from the factory in Oundle to the East coast, a 93-mile journey that involves mostly rural roads. There are more direct routes, but they involve low 15-foot bridges that prevent the 33-ton boats from passing underneath.

Fairline delivers its yachts by truck from its inland facility to the coast. That often involves a two-day journey on country roads.  Courtesy Fairline Boats

Some sections of road in the Cambridge area are so narrow, says Daly that the truck transporting the yacht is forced to drive on both sides of the road. Fairline has a team  to clear obstacles and warn oncoming traffic. The journey of a Fairline Squadron 65 completing the route was filmed by BBC East in 2018 and can be viewed here.

Jet Ski From an Underwater Scooter to a Hot Tub Boat: The 12 Best Water Toys for Summer