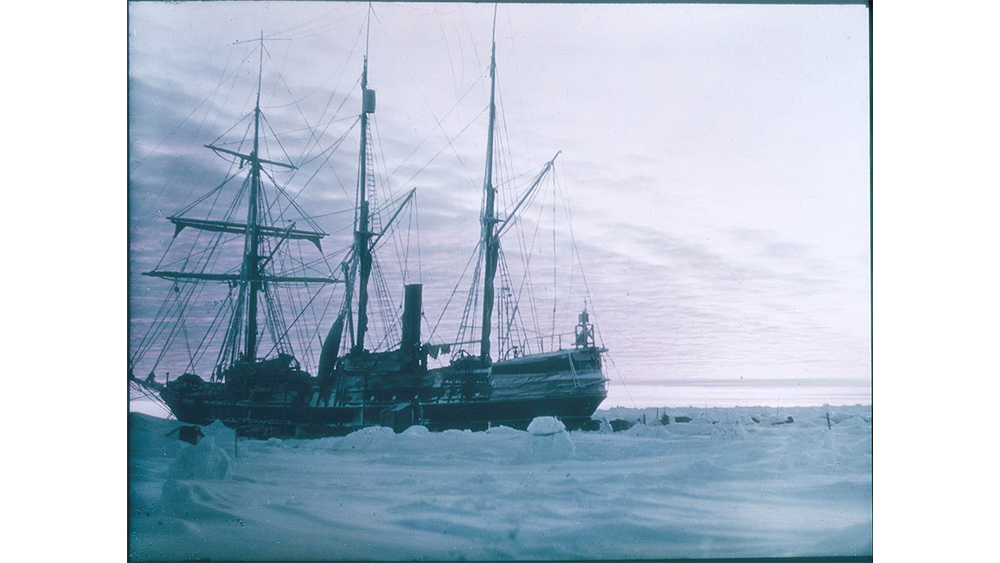 Endurance, one of the most famous boats in polar exploration, was discovered several days ago 10,000 feet beneath the surface of the Weddell Sea, one of the world’s coldest and most inaccessible bodies of water. The wooden vessel was used by Sir Ernest Shackleton in 1915 on an ill-fated attempt to cross Antarctica on foot via the South Pole. It became stuck in ice 100 miles from where Shackleton planned to start the journey.

“We are overwhelmed by our good fortune in having located and captured images of Endurance,” Mensun Bound, director of exploration for the Endurance22 mission, said in a statement. “This is by far the finest wooden shipwreck I have ever seen. It is upright, well proud of the seabed, intact, and in a brilliant state of preservation.” The boat’s name is still affixed to the stern.

The boat’s name, above its emblematic polestar, is still fixed to the stern.  Courtesy Falklands Maritime Heritage Trust and National Geographic

The South African polar research vessel, SA Agulhas II, needed to navigate the Weddell Sea’s ice pack to get near to the reported wreckage site, while Saab’s Sabertooth hybrid underwater submersible explored the extreme depths for days. The submersibles combed the bottom of the Weddell Sea, using sonar to scan for the wreck. Once it was located, the team brought in cameras to take high-resolution images.

Part of the mission’s success was because Captain Frank Worsley, skipper of Endurance, left detailed notes of where the boat sank, allowing the researchers to find it 106 years later, only four miles from Worsley’s original records.

Ernest Shackleton may not mean much to most modern seafarers, but a century ago, he was a household name for taking part in three British expeditions to the Antarctic, including being part of Robert Falcon Scott’s team in a race to the South Pole against Norwegian Roald Amundsen. The period was known as the “Heroic Age of Antarctic Exploration.”

The research vessel SA Agulhas II had to venture into the Weddell Sea ice pack to get near the area where Endurance reportedly sank.  Courtesy Falklands Maritime Heritage Trust and Nick Birtwistle

In January 1915, Shackleton was on a sea voyage to start on his cross-Antarctica trek via the South Pole, when the expedition ship, the 144-ft., three-masted Endurance, got trapped in pack ice. The ship drifted with the ice for 10 months. As it became increasingly damaged, the crew set up camps on the ice and lived there for five months after Endurance sank. Shackleton and the 27-man crew then rowed lifeboats to uninhabited Elephant Island.

What followed was a dramatic, stormy 800-mile Southern Ocean crossing to South Georgia by Shackleton and four men in a lifeboat, rowing most of the way. Shackleton and two others then crossed the mountainous island to the whaling station at Stromness.  From there, Shackleton was able to organize a rescue of the men on Elephant Island and brought them home without loss of life.

The journey, Shackleton’s most famous accomplishment, has made the Anglo-Irish explorer a role model for leadership in extreme circumstances.

The research team also conducted hundreds of hours of climate-change data during the expedition, including measuring ice drifts and ice thickness, and weather conditions of the Weddell Sea.

“These important studies will materially help our understanding of this remote region and how it influences our changing climate,” said Dr. Lasse Rabenstein, Endurance22’s chief scientist.

The Antarctic landscape with Endurance in the background. As the boat broke up during ten months of being trapped, the crew set up makeshift camps on the ice.  Frank Hurley, Mitchell Library, State Library of New South Wales

The research mission, which has been live-streamed, will also appear in a documentary next fall on National Geographic’s Explorer series.

Endurance is protected as a Historic Site and Monument under the Antarctic Treaty. It can be surveyed and filmed, but not touched or disturbed.