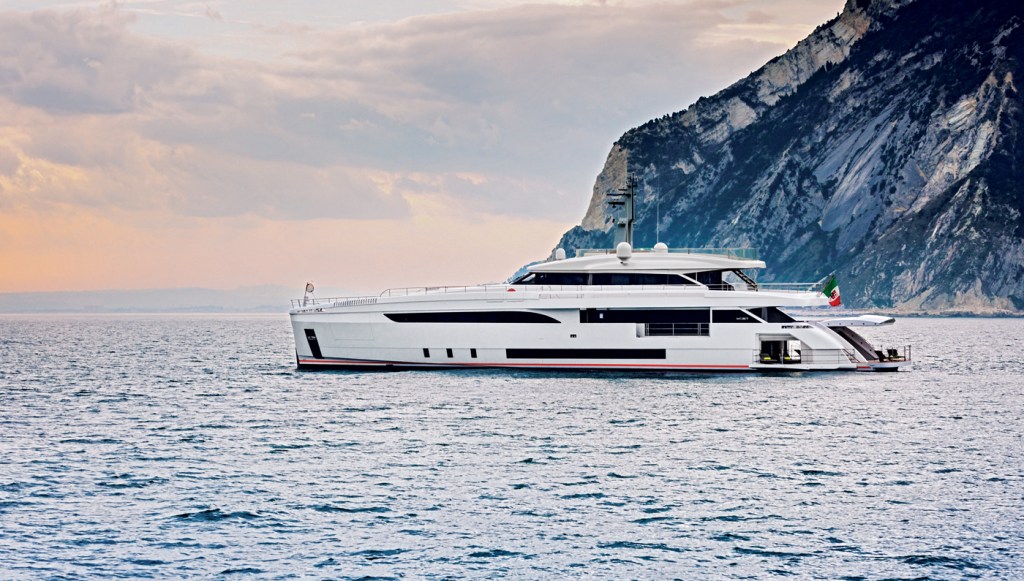 The first Wider 150 is rated the quietest yacht in its class.

You know that a superyacht runs quietly—almost silently—when you look out a window and are surprised to see that the boat is under way. Such was the case during a recent day cruise in the Mediterranean aboard the first example of the Wider 150, a 150-foot semicustom design from Italy’s Wider Yachts. A group of passengers were chatting in the sky-deck lounge when one mentioned that the Wider 150 had left the dock. None of us had heard any accelerating engines or felt any hull vibrations.

As it continued to operate in zero-emissions mode, the 391-ton yacht smoothly cut through the waves while its propulsion system registered only 37 decibels, which is three decibels quieter than a refrigerator hum. The wine in the glasses sitting on the sky deck’s bar passed the yachter’s vibration test: no ripples on the surface. The Registro Italiano Navale, the Italian organization that classifies and certifies ships and yachts, measured the sound and vibration levels aboard the Wider 150 during sea trials and was so impressed that it gave the vessel a rating of 100—the first time the organization has awarded a perfect score to a superyacht.

The whisper-quiet ride is merely one of the alluring features of the Wider 150, which is priced at about $29 million. The Wider 150 woos guests with 3,700 square feet of exterior space spread across four decks, as well as a 950-square-foot beach club, a tender garage that converts into a 23-foot-long swimming pool filled with seawater, and a spacious master suite with a 60-square-foot fold-down balcony.

The sophisticated diesel-electric propulsion system that can operate in near-silent zero-emissions mode is a first for a vessel this size and has established new fuel-burn and emissions standards for superyachts.

“I wanted to design a boat around a new type of propulsion system,” says Wider CEO Tilli Antonelli, who conceived the 150 about 5 years ago. “I wanted to build something that had never been done in yachting.”

While running in zero-emissions mode, on battery power, the Wider 150 can travel as fast as 5 knots for 8 hours. At 10 knots, it consumes only 17 gallons of diesel fuel per hour, giving it a range of 4,700 nautical miles. Our trip was much shorter: We departed from Cannes, cruised around the nearby Iles de Lérins, anchored for lunch, and then returned to Cannes. Guests enjoyed time on the open sky deck, which includes a Jacuzzi and reclining lounges, and at the foredeck seating area. It’s covered with a hard top on pillars that folds down when the space is not in use, maintaining the yacht’s streamlined look. At the stern, the transom door lifts up and platforms fold down from the sides of the hull to create the beach club, a wide deck between the pool and the ocean. When the yacht is under way, the pool becomes a garage for the Wider 32 that serves as the Wider 150’s tender.

The owner’s suite encompasses 850 square feet, has a ceiling that is 7 feet 2 inches high, and is divided into a bedroom, an office, and a bathroom with marble walls and an oak tub. The suite’s terrace features a teak deck that slides out from the hull when the balcony folds down. “We could have built it the standard way, but that would’ve meant having a teak wall on the interior,” says Antonelli. “Instead, we built a special sliding mechanism so that the space remains consistent with the rest of the wall.”

The slide-out deck, the beach-club design, and the quiet and efficient propulsion system are all consistent with Antonelli’s reason for establishing Wider, which he did in 2010 after running the Pershing yacht brand for 25 years: He wanted to create an entirely new type of yacht. “It was exciting to think about something that didn’t exist in yachting,” he says. “This was a new frontier.”

The Wider 32 can ferry or enthrall passengers.

The Wider 32 was conceived as the tender for the Wider 150, but company CEO Tilli Antonelli also envisioned it as a stand-alone day boat. He wasn’t alone: Wider has sold a dozen examples of the $384,000 vessel since launching it 2 years ago.

Skipping across 1-to-2-foot waves in the Mediterranean, the Wider 32 was fast, nimble, and a lot of fun. It’s powered by twin 260 hp MerCruisers with Bravo 1 drives. They enable a top speed of 37 knots, and with power steering, trim tabs, and trim and tilt on the drives, the boat is easy to handle.

It’s also easy on the eyes. The curved bow flows backward into a wide-open cockpit that drops into a tumblehome at the stern. The cockpit is furnished with a U-shaped lounge that converts to a sun pad. The decks—including the foredeck and swim platform—are covered with teak.

The 32 can accommodate 12 passengers, which is ideal for a tender that ferries guests to and from port, but it also has deep storage lockers for wakeboards and other water toys that you could use with a speedboat.

The cabin appears spartan, but the cabinets contain a microwave, a fridge, and a stove. The head in the bow is large enough for a shower, and the lounges along the sides of the cabin can serve as beds.

The 32’s exterior can match the mothership’s, as this tender does, or it can be ordered in a range of colors including white, blue, and orange.