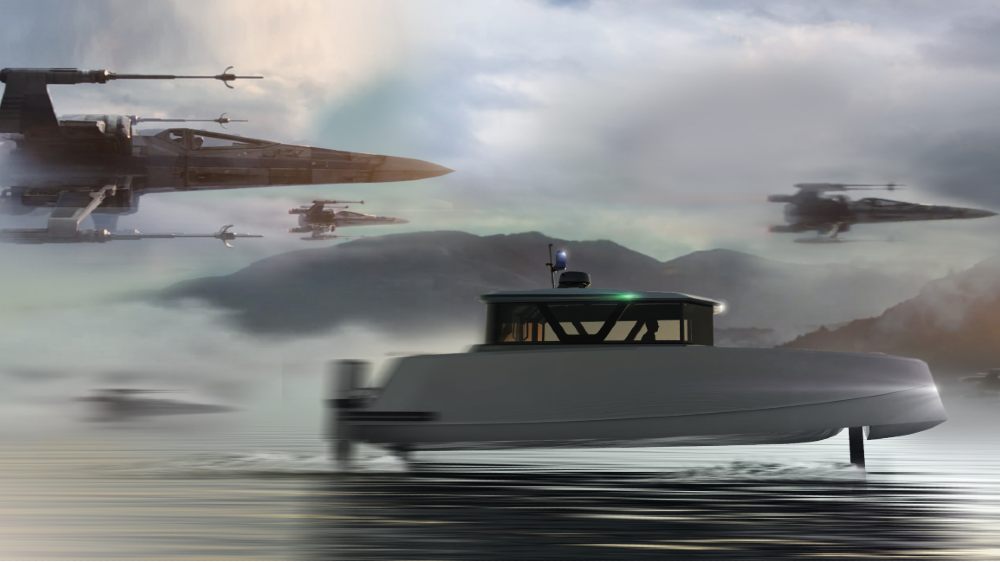 Every year on Star Wars Day, the team at ThirtyC releases images of a yacht with some sort of image from the classic series. This year, the London-based firm showed rebel X-Wing Starfighters—the same intergalactic jet flown by Luke Skywalker—providing escort to a Navier 27, a new electric day boat that is scheduled to launch by summer’s end.

“Our work with Navier and the design of the foiling boat is well on its way to bridging the gap between technology that has only been dreamed of so far in the Sci-fi world,” Rob Armstrong, creative director of ThirtyC, told Robb Report. “It’s fully electric, with advanced software to control the foils and it flies above the water, so it represents how fact and fiction are starting to blend.”

The design team also added a second sun to an image of the superyacht Galaxy. “We couldn’t think of a yacht with a better name to mark this day,” said Armstrong.  His agency recently collaborated with the Njord by Bergman Design House on the exterior styling of Galaxy.

An AT-AT walker from the empire aboard a modern Damen shadow boat.  Courtesy ThirtyC

The yachting images commemorating the world that George Lucas created started seven years ago. Armstrong describes what began as “a bit of Photoshop fun,” as becoming a wide-ranging project that has put characters from the franchise on many different styles of motoryachts.

They have ranged from Empire AT-AT Walkers on shadow boats, to Darth Vader and a stormtrooper on fast superyacht tenders.

“We started this right after our studio opened and felt like we were injecting a bit of fun into our industry,” says Armstrong. “Most of us knew Star Wars growing up, so it seemed like a good way to add humor to what can sometimes become very serious superyacht projects.”

The real-life ‘Galaxy’ is another ‘Star Wars’ superyacht, but this version is in a galaxy far, far away.  Courtesy 30Creative

The team takes great care in the execution of the images. “The composites include placing props and vehicles within the images,” says Armstrong. “Some of the characters were 3-D-modeled and placed to match the image. We want the shadows to look right on the boats.”

May the 4th Be With You.