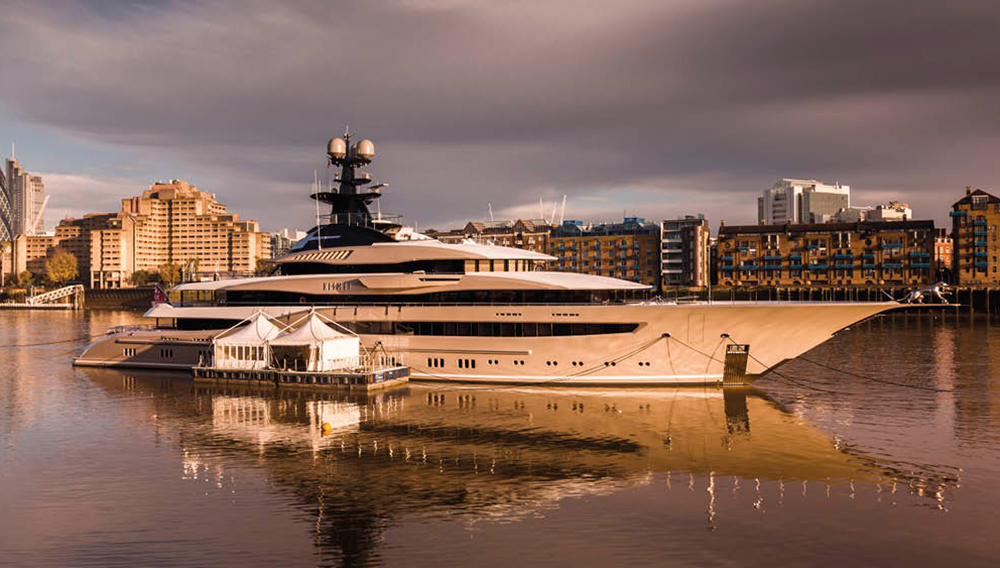 Superyachts are beacons of innovation, from hydrogen propulsion to touch-control navigation. They’re also vehicles of what British furniture maker Silverlining calls “21st-century craftsmanship,” combining artisanal skills with the latest technology. But where does craftsmanship end and manufacturing begin?

“There is a perception that if it’s done by hand it’s craftsmanship, and if it’s done by machinery it’s not,” Jason Chadda, director at Silverlining, told Robb Report. “We’ve always embraced technology. In our eyes, a CNC is just a different type of tool, there’s still a craft in its usage.”

“Machinery is allowed,” agreed Andrew Winch at a talk he gave during London Craft Week in October. “Craftsmanship is about creating a unique vision, which is typically done by hand, but I wouldn’t waste someone’s creativity by not using the machine.”

At Silverlining, precision laser cutters and robotic CNC routers (computer-controlled cutting machines) are used alongside age-old skills, such as marquetry and leatherwork. It’s part of the studio’s bid to test the limits of contemporary furniture making, researching and developing new finishes, materials and aesthetics to pair with artisanal techniques.

“The problem with machines is that everything is too perfect,” says Chadda. “To mitigate this, we play around with algorithms to try and persuade the CNC to do unpredictable things.”

On the flipside, Guglielmo Carrozzo, head of marketing at DKT Artworks, says it’s easy for perfection to be taken for granted within craftsmanship. “It’s hard for clients to be impressed by a stucco finish or gilded wall, even though it takes multiple craftsmen weeks to perfect, because the end result looks simple,” he told Robb Report. “Conversely, bas relief with a 3D finish always makes an impact because of its tactile nature. It has a real wow effect.”

For Carrozzo, the essence of craftsmanship exists within the storytelling. He highlights the central staircase as a hero area—the only vertical zone on board a yacht. Examples include Kismet’s staircase, with its free-form metal banister, 160-kilo art deco-style glass chandelier and striking video walls, or the transport-inspired designs carved and then cast as lightweight metalized panels aboard Excellence V. On the Winch-designed Sea Owl, it took two years and seven carvers to carve out of wood the General Sherman tree that looms large in the central stairwell. Made from 16 individual panels, it spans four decks, with marquetry tree roots that flow along the lower deck corridor and into every guest cabin.

Natural materials, such as stone, silk and wood, remain popular among yacht owners, but aboard PYC-class yachts, which are subject to advanced fire ratings, there are fewer finishes that comply. In this instance, the creation of new alternatives is where old crafts unite with advancing technologies.

“During our monthly Innovation Friday, we create stuff you don’t get to make anywhere else,” says Chadda. “Our artisans’ skills evolve just from the theory.”

Plastics made of rattan, vegan palm-leather and fingerprint-resistant lacquer for security-conscious owners are among the Welsh studio’s current research projects. The suitability of new materials is then tested in an accelerated weather chamber, exposing them to the types of temperatures, humidity and sunlight found at sea.

Even more exciting is the cross-pollination of ideas via Silverlining’s design partnerships with McLaren, Foster + Partners and Frank Gehry. It’s led to shared innovations between yachting, automotive and architecture, such as the invention of self-healing composites, in which surface damage can be repaired just by heating the affected area.

“What our clients share is the desire to be first and to have something that is wholly one-of-a-kind,” says Chadda. “Within craftsmanship, it’s not so much about the raw material, but what we do with it that counts.”