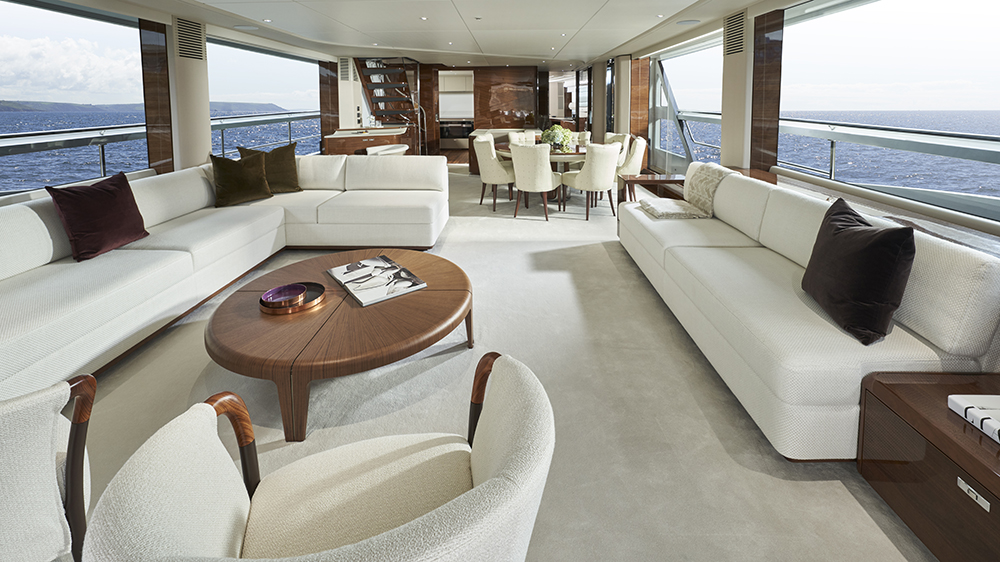 It’s no secret that size matters in the yacht world, but for a forward-looking generation of builders, it’s what’s on the inside that counts. Maximizing interior space has become the go-to approach for many brands, with the Ferretti Yachts 1000, Princess X95, Benetti Oasis, Wally WHY200, Sanlorenzo SX112 and Azimut Grande Trideck—all launched within the past year—joining larger custom superyachts in a quest to increase usable interior space.

“The X95 layout has 40 percent more indoor space than a traditional motor yacht,” says Richard Dart, principal designer at Princess. “You can get a 95-foot boat into most marinas, and when you increase the interior by 40 percent, it attracts clients who might live aboard, especially in the current climate.”

How to keep the profile svelte—or at least not bloated—is the trick. “That was the challenging part,” says Dart. “As we increased volume, we worked with the aesthetics across the X95, using features like a horizontal deck line that runs from bow to stern, to reduce the sense of height.”

The Ferretti Yachts 1000 retains a sleek profile despite its additional volume.  Alberto Cocchi

“The upper deck is nicely shaped, and the use of glass gives it a clean look,” says Pininfarina chief yacht designer Daniele Mazzon, who worked closely with Princess on the X95’s exterior. “The goal was to have two large decks, with a flybridge and lounge that you’d find on a larger superyacht, with a flowing profile.”

But adding more space doesn’t mean just upsizing existing areas; builders are also looking to create fresh designs. Hence the SX112’s vast, full-beam salon and the tiered beach club on the Ferretti 1000. “We saw the interior as a 3-D jigsaw puzzle, where we changed ceiling heights and even room positions to best use space,” Dart says of the X95.

But not everyone’s a fan of the new full-bodied generation. “The design is not very happy, in my opinion,” says veteran Italian yacht designer Tommaso Spadolini. “It pleases clients who want space but who are not as concerned with performance. The same thing happened in the car industry,” he adds, and it’s clear he did not intend the comparison to be a compliment. Designer Philippe Briand agrees that “there’s a risk to pushing the envelope” because tradeoffs for a larger (albeit more beautiful) interior include reduced seaworthiness and running comfort.

“This trend will stay,” argues Bart Bouwhuis, co-creative director of Dutch design firm Vripack, because “with younger owners, the definition of what a yacht should be has changed.” The goal now, he says, is not traveling between destinations but having new experiences. “They want to anchor off for a week, snorkel and dive with their kids. It’s a home at sea.”

The Ferretti 1000’s flybridge is nearly half its hull length.  Alberto Cocchi

Princess’s Dart says the high-volume approach will apply to the brand’s new X80, while Ferretti Group COO Stefano de Vivo says the 1000 will be followed by smaller models, though Bouwhuis believes the space-maximizing interiors will be most common on larger superyachts attempting to remain under 500 gross tons of interior volume, at which point the vessel is regulated more like a ship.

A knock-on effect of the new design approach is an evolving consideration of aesthetics. “If the concept is strong and the exterior matches the interior design, then it will express its own beauty,” Briand says. “At least to its owner.”