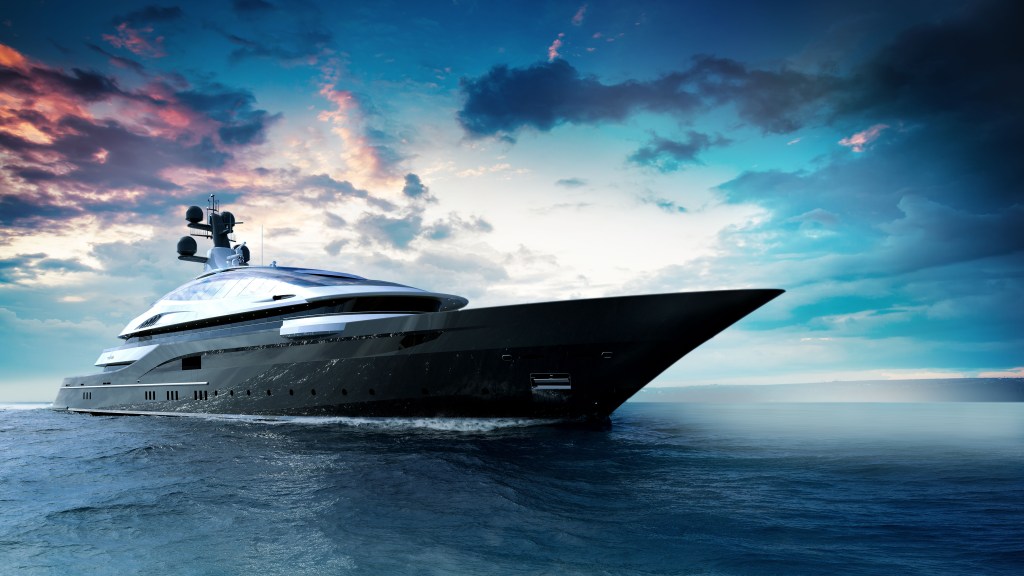 Oceanco has introduced many of the world’s most compelling gigayachts. The Dutch shipyard has also partnered with leading designers for concepts that take your breath away. The 295-foot Cosmos concept from Luiz de Basto and Oceanco has a curved, almost sportboat-like superstructure, but its most dramatic feature is the skydeck, enclosed in thousands of square feet of glass. Like a starship in a sci-fi movie, the glass dome allows for unrivaled views in every direction, whether it’s gazing at the night sky from a Tahitian cove or taking in the lower Manhattan skyline by day.

De Basto and Oceanco are both known for creating concepts that can be turned into reality. Oceanco’s engineering department studied Cosmos’s feasibility and gave it an enthusiastic thumbs up. Cosmos’s glass panels are enclosed in metal frames and the supporting frame leans forward, not only to enhance the structural integrity, but also to improve the view. The UV-protected glass can be dimmed or even colored to match onboard moods. “While the glass looks simple, it is extremely complex in order to comply with all the regulations,” says De Basto. “This provides an interesting tension between being adventurous and being safe.”

The enclosed skydeck has a flexible layout with long lounges in the center, a piano bar forward, and many feet of open space between the sole and dome above. Forward via glass doors is an open observation deck with optional Jacuzzi. Aft is a large terrace for alfresco dining. The bow has a helipad, and on the rear cockpit, up long stairs down to the beach club, is an infinity pool.

Cosmos’s superstructure is much farther forward than most yachts, making it quite the contrast to the straight-edged, layered look of a traditional 300-foot yacht. De Basto has yet to reveal an accommodations plan for Cosmos, or even engines for that matter, but BMT Nigel Gee naval architects designed the hull for remote, bluewater voyaging, so it falls somewhere between a traditional cruising yacht and an explorer.