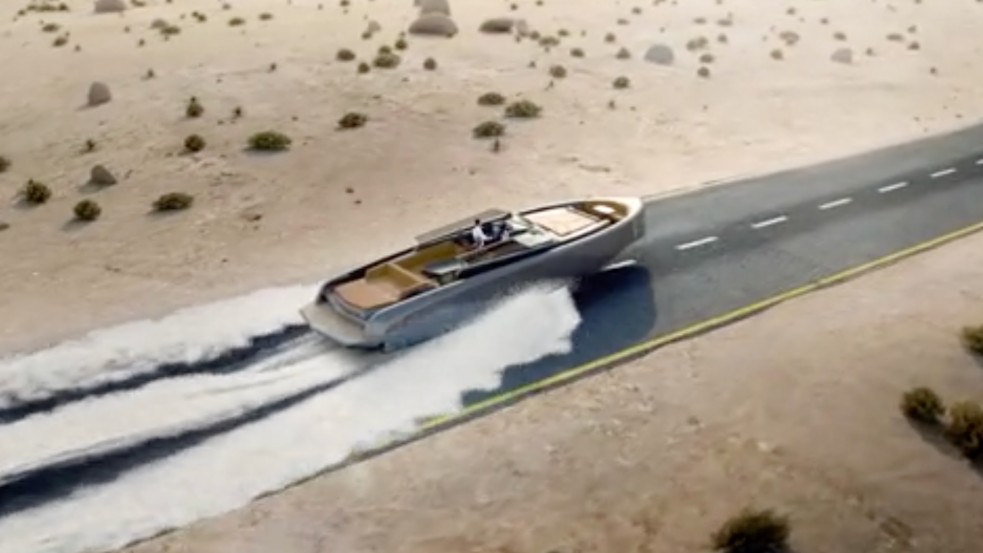 Unlike Kitt, David Hasselhoff’s ride in “Knight Rider,” no boat has ever starred in a TV show or movie. Many have had supporting roles, like the African Queen or Andrea Gail in “The Perfect Storm,” but none have ever delivered their own Oscar-worthy performances—until recently.

In 2020, Riva launched a short film called “Riva In the Movie,” which had a moody, almost haunting ambiance, featuring a devilishly handsome man driving his vintage Riva around Venice’s canals at night. It was used as a promotion for the brand’s book, with the same title, about Rivas in the movies over the last 70 years. At the other end of the spectrum, Vanquish Yachts also unveiled a sci-fi-ish movie, showing one of its yachts launching into a desert and then driving up the highway at full speed.

Two other more recent shorts bankrolled by Azimut Yachts and the Ferretti Group—the two largest Italian boatbuilders—are taking a more adventurous tack. They’ve avoided the typical promotional videos that play up the brands and hit viewers over the head with the yachts’ features in every frame. Instead, they use professional actors and Hollywood-caliber production to tell stories about their yachts.

Hollywood comes to Venice: “Open Your Eyes” is a love story starring two-star-crossed lovers and one Azimut yacht. The production values were exceptional.  Courtesy Azimut Yachts

“We think the typical product video is on its way out,” a spokesperson for Ferretti Yachts told Robb Report. “We are now making movies that tell a story. You’re going to see more of those from Ferretti Yachts with new products unveiled this year.”

The short that debuted with the launch of the Ferretti Yachts 1000 uses the stanzas of “I Wish You Time,” by the German poet Ellie Michler, as its backbone. It is set on the 100-foot yacht and follows a multigenerational family gathered on board. It gained more than two million views following its official launch in Venice last year, with versions in both Italian and English.

“We wanted to tell a story about a yacht that is also the history of a family—a family filled with feelings and memories,” said the Ferretti rep. “We have three generations on board. The idea was for the grandfather to pass on the message that time is life’s greatest gift to his grandson.”

Warm, family memories are evoked during “I Wish You Time,” a 2.5-minute film that shows three generations of a family enjoying their yacht.  Courtesy Ferretti Yachts

It’s a far cry from the typical messaging of most yacht builders—which focus on beautiful young people sipping cocktails on the flybridge, or floor-to-ceiling glass in the salons, or inlaid marble in the master suite’s head. Instead, it hones in—in just two and a half minutes—on what families can gain from their boats: memories and emotional bonds that are often talked about for multiple generations.

Italian director William9 knew he had a tough project on his hands. How do you sell a product without visually showing every room and standout feature? His answer: Ignore them and focus on the people using the boat. “We tried to tell a story of a simple family on their yacht—which represents their home on the sea,” he told Robb Report. “We also had the advantage of working on an amazing yacht and a beautiful natural environment.” He thought those features would tell their own visual stories.

The other advantage was that the client’s and director’s visions aligned, so creative differences with the Ferretti team were minimal. William9 found shooting on a boat challenging, partly because of the constant motion and change in lighting. But also because there were no land borders to define the shots. So, he combined tight shots of the yacht’s interior and cockpit, with the actors in different ensembles, with multiple exterior shots of the yacht.

There were a few brand partners—Dolce&Gabbana, Galleria Tornabuoni and Pisa Orlogeria—but the only product that was obvious was a Rolex watch given from grandfather to grandson at film’s end.

Gabriele Muccino’s Open Your Eyes is a longer, more complex movie—with more than 100 people and companies in the credits—involving a love story between an Italian photographer and his editor in New York. Set in Italy, it shows Rome’s historic architecture and Venice’s natural beauty, setting up for the grand finale aboard Azimut’s Magellano 25M.

“We did our best to give a soul to the story in order to create a meaningful presence to the places in the movie,” says Muccino, who directed the Hollywood movies “Pursuit of Happyness” and “Remember Me My Love,” as well as many Italian features and shorts. “The big idea is how much value art, design and beauty imparts to our soul. It shows that extreme attention to how something is created—whether it’s a sculpture or yacht—divides mediocre from genius, and makes it sublime.”

The Italian backdrops are stunning and Muccino, who uses the love story to propel the narrative, concludes the film with the Magellano—a small explorer yacht that would make sense for the young couple if they want to sail into the sunset.

Muccino also wanted to avoid the cliché of promoting the boat as a product and instead show its curves, technology and aesthetic details in tight shots. The only branding visual is the word “Azimut,” shown fairly discreetly, when the two main characters meet in person. “The boat is beautiful even if you don’t stay on the details like a conventional promo,” says Muccino.

The director was fortunate to be working with Azimut’s Giovanna Vitelli, who wanted to try a new approach to bring new eyeballs to the brand. Vitelli, part of the second-generation founding family, has a cosmopolitan, arts-influenced outlook. That means she is seeking new ways to promote the Azimut brand outside a traditional boating audience. “Giovanna and I collaborated very closely on the project,” says Muccino. “We ended up merging love, attraction and beauty in a 12-minute short. I think for this yachting sector, that’s unique.”

Tugging the heartstrings with granddaughter and grandfather.  Courtesy Ferretti Yachts

Will this subtle, narrative-based approach to yacht promotion remain an outlier? It will certainly be limited to the builders with the deepest pockets. Azimut-Benetti and the Ferretti Group, which go head to head, are arguably global innovators in promoting their boats.

But as a smaller yard like Vanquish shows, less costly, effective shorts can be made from the latest video technology rather than shooting on location. “We may well have created one of the most impressive yacht movies seen to date,” said the company.

Maybe, but expect to see other contenders this year if the Oscars ever come up with a yachting category.