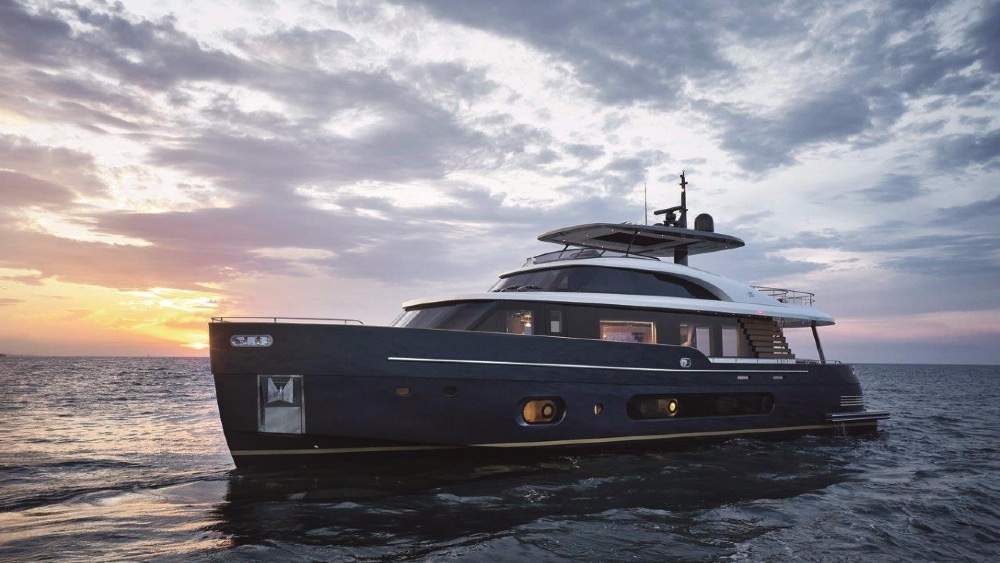 Azimut Yacht’s new Magellano 25 Metri was such an important launch for the company that they are making a movie about it. Award-winning director Gabriele Muccino, who directed Will Smith in The Pursuit of Happyness, will have the newest 82-foot Azimut as his latest star. While pleasure boats have long featured as backdrops from movies and television, ranging from On Golden Pond to The Walking Dead, this is the first time a yacht has played a leading role in a movie.

In a sense, the Magellano 25 Metri is a breakthrough design for the Italian builder, with a highly unusual interior by artist and architect Vincenzo De Cotiis and exterior by Dutch naval architect Ken Freivokh. The Magellano series first started as relatively functional, long-distance cruisers more than a decade ago, but now Azimut is turning them into floating art.

De Cotiis’s interior includes extensive use of fiberglass not just as a building material but as original works of art. It is a key element to the design. The artist used a special type of resin embellished with a bronze power to give surfaces a clouded effect and the look of precious stones. He also employed brushed Verde Alpi marble, dark walnut, carpeting, polished brass, lacquered wood and ribbed wood to complete the customized effect. Two original art works by De Cotiis hang in the owner’s suite and corridor. There’s a sense of continuity across the interior through the use of seamless, curving lines, both in the walls and even in the shapes of the furniture.

Beyond materials, De Cotiis was concerned with increasing the perception of depth, especially in the salon. The space, designed so owners and guests can see the water from any point, is flooded with natural light. The stairway is defined by mirrors to “dematerialize it,” according to the artist, while the reflections of the sea also brighten what is typically a darker area of a yacht.

At night, the artificial lighting includes not only lamps and ceiling lights, but lights under the sofas to create an impression that the furniture is suspended.

The five-stateroom layout includes an owner’s suite, as well as four guest staterooms, including two VIPs and a single and double stateroom. All materials come from Loro Piana Interiors.

The salon is designed with a more circular, organic feel, rather than the typical rectangular shape.

Colored in brass, Freivokh’s exterior is handsome in a retro-futuristic way, with a vertical bow and  glass superstructure. A spiral staircase goes from the main cockpit to the fly deck, while the foredeck has a social area. Azimut used carbon-fiber across different sections of the hull to expand volumes without compromising structural stability.

The 25 Metri also has a “hotel mode,” unusual for a yacht this size, that allows onboard functions to work without using the generators. In the age of Covid, there is also a BCool active sanitizing system that has been used by NASA on spacecraft. The internal structure has been engineered to minimize vibration and engine noise.

A closeup of the use of different materials across the interior.  Azimut

The Dual Mode hull has been used on other Azimuts, and is a shape that allows for both slow, economical cruising and faster speeds that can reach 29 mph.

Maestro Muccino’s short film about the new 25 Metri will debut in September at the Maeght Foundation in Saint-Paul-de-Vence in Provence, France, as part of the launch of the new Azimut.