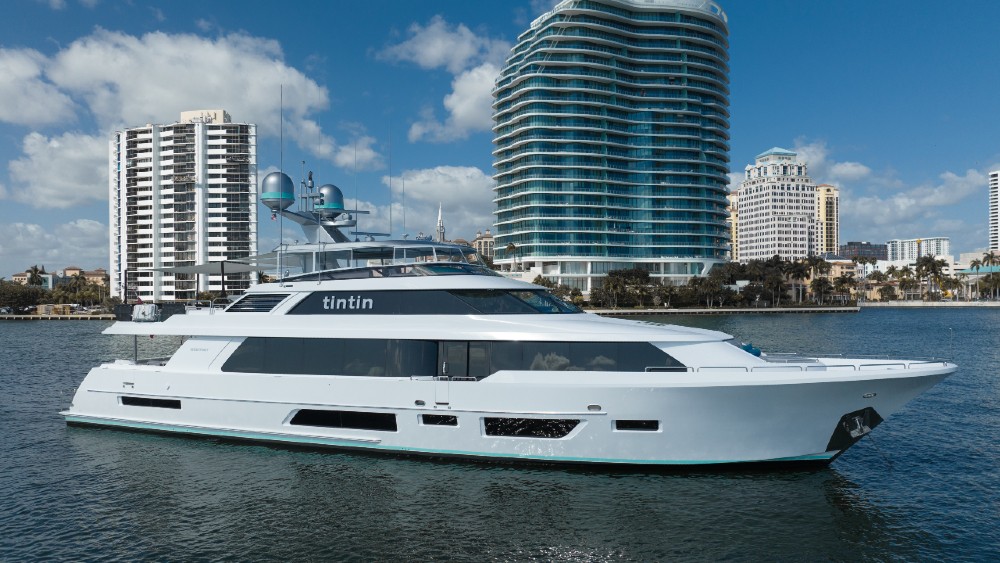 Most superyacht owners tend to dress their interiors in fairly conventional clothing: Neutral beiges and grays, with light-colored woods that look oh-so contemporary, and standard layouts that don’t buck trends but rather stay in a defined comfort zone. The kind of high-end executive suites or trendy McMansions that are so safely contemporary that they’re entirely forgettable—and boring. Sometimes it’s about the yacht’s resale value. Other times, it’s about the owners themselves who allow only the smallest bit of their personalities to show.

Then there are owners who want to show their worlds through their yachts. Sometimes they choose heavy reds, black and golds, with zigzag patterns in the carpets. The décor is rich, heavy, somber. Other times, cabins are clad in wood, replete with nautical motifs, like a yacht from the 1930s.

Once in a blue moon comes a yacht like tintin, a 112-foot Westport that was delivered last year with a whimsical, well-conceived interior that is about as far from conventional or tacky as one could get from the Pacific Northwest shipyard which, until the last few years, has taken a fairly conservative bent to interior design. Or rather, the owners have tended to be more conservative than say, owners building custom or semi-custom yachts in Europe.

“The owners are art connoisseurs, so we started with their art collection and worked from there,” says Sylvia Bolton, Westport’s lead interior designer. “It was a real pleasure working with such knowledgeable people.”

As one might expect, tintin was themed around the famous comic book series The Adventures of Tin Tin. The series by Belgian cartoonist Hergé is about a reporter and adventurer who travels around the world with his dog, Snowy. While the boat is named after the character, and there are some images of Tin Tin, most famously one with a huge black and white portrait of Lauren Bacall in the main salon, the interior is more of a loose collection of whimsical and bright pieces. It delivers a fun vibe, rather than being a museum of Tin Tin artifacts.

Even the country kitchen has touches of whimsy. Note the rabbits on the table and dragon in the tea kettle to the left.  Courtesy Fraser Yachts

“The whole idea was for every room to be experienced and around every corner to make the owners and guests smile,” says Bolton. A life-sized Great Dane, covered in Sunday comic strips from Tin Tin looks like a huge papier mâché sculpture, while below is a full-sized knight in armor with a tiny Stewie Griffin-like doll from Family Guy looking out of the open visor of the helmet. Then there is the custom paw-print rug, which Bolton drew herself, and glass-shaped clouds that serve as a whimsical chandelier over the dining table.

Light and airy is probably an understatement for the salon, and the interior as a whole, but there’s also a sense of order with all the different elements.

“We used the Memphis Design movement as a template,” says Bolton, referring to an art design movement from the 1980s that is now making a comeback. Actually, originating in Milan rather than Memphis, the idea was to counter the straight lines and “good taste” of the 1970s with bright, whimsical and often clashing objects. The yacht is a tidier rendition of this, but still fits in the same genre.

The owners designed the interior around their art collection.  Courtesy Fraser Yachts

The whimsical effect continues across the boat to clouds in one of the guest suites, to the white-dotted patterns in the shower, all the way to a dragon on the top of the teak kettle in the country kitchen.

Beyond the colors and artwork, Westport didn’t do that much customization to the interior, apart from a set of three doors in the salon that were designed to look like a 1930s oceanliner, complete with the round porthole. They cover the owner’s wine cellar as well as a storage unit.

The colors continue to the upper Jacuzzi with life ring.  Courtesy Fraser Yachts

The owners are also animal activists, so mandated that anything in the interior had to be vegan. That translated to some of the faux leathers and, of course, the paw-print carpet.

The pilothouse seems most like a conventional yacht, while the whimsy begins again on the flybridge, with its teak deck, and aquamarine upper helm, tables and even the top radome. The Jacuzzi’s natural turquoise water color also blends in with the topsides.

And to the upper helm.  Courtesy Fraser Yachts

Sadly for the old owners, or perhaps fortunately for the new owners, tintin was recently sold by Fraser Yachts. It’s not clear if the new owners will redo what is a very personal interior, or continue to enjoy the fun ride.

“We wanted to create an experience,” says Bolton. “The concept was much more than a conventional yacht. We wanted to have owners walk around the boat and smile.”