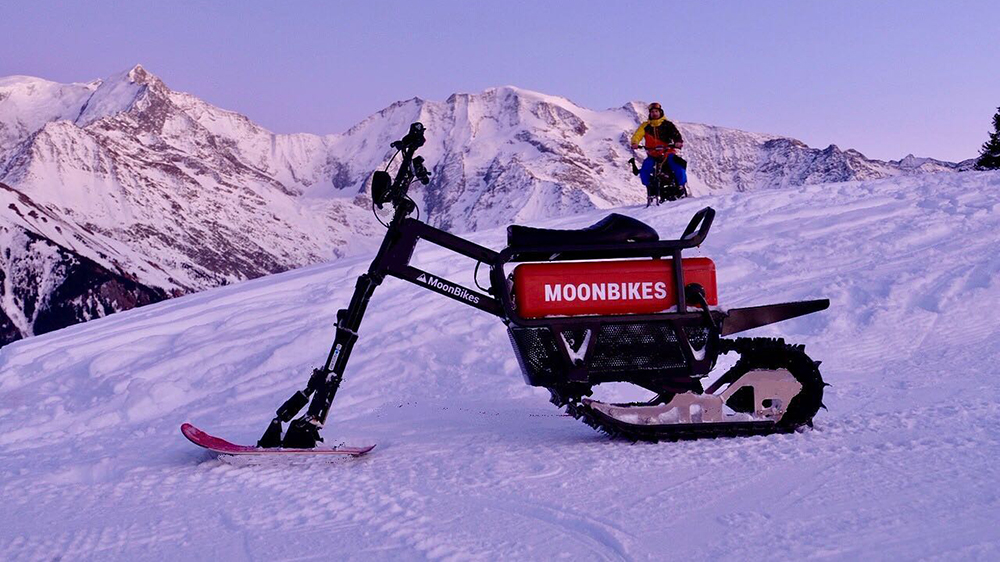 The onset of snow season usually means it’s time to pack up your dirt bike until the weather warms up again. But a new electric model from Moonbikes will let you cut through the powder and ride through winter with ease.

The French startup has just introduced Stardust, an electric bike specifically designed for riding through the snow. With a front ski and rear motorized tread in place of the usual two wheels, the company’s snowbike, or “rover,” will allow you to zoom around town no matter how many drifts accumulated over night.

Designed as much for fun as utility, the Stardust is a compact snow vehicle with some serious zip. It features an electric motor capable of delivering 3 kW of continuous power and pushing you to speeds of up to 28 mph, according to New Atlas. This motor is powered by a pair of removable batteries which will provide between 11 and 22 miles of range each. With both equipped you should have more than enough juice to get you through a day of riding.

While the company’s snowbike can’t compete with the power or range of a traditional snowmobile, it bests the gas-guzzler in two key areas. First, its electric powertrain means it’s much more eco-friendly. Second, it’s much more compact and lightweight, tipping the scale at just 176 pounds with one battery. That’s less than half the weight of a traditional snowmobile.

Moonbikes has yet to announce any pricing information for the Stardust, but the snow bike will reportedly be available for pre-order early next year. It will launch alongside another rover, called the Ranger. That model is designed for mountain professionals and includes a flashing light, ski rack, tool box and an attachable sled.

If you like the idea of a snowbike but want something you can actually pedal, there’s also Envo’s electric snowbike kit. Compatible with most electric mountain bikes, the two-part kit allows you to swap out your front and rear wheels for a ski fork and motorized track so you can travel across the frozen tundra. Happy riding!