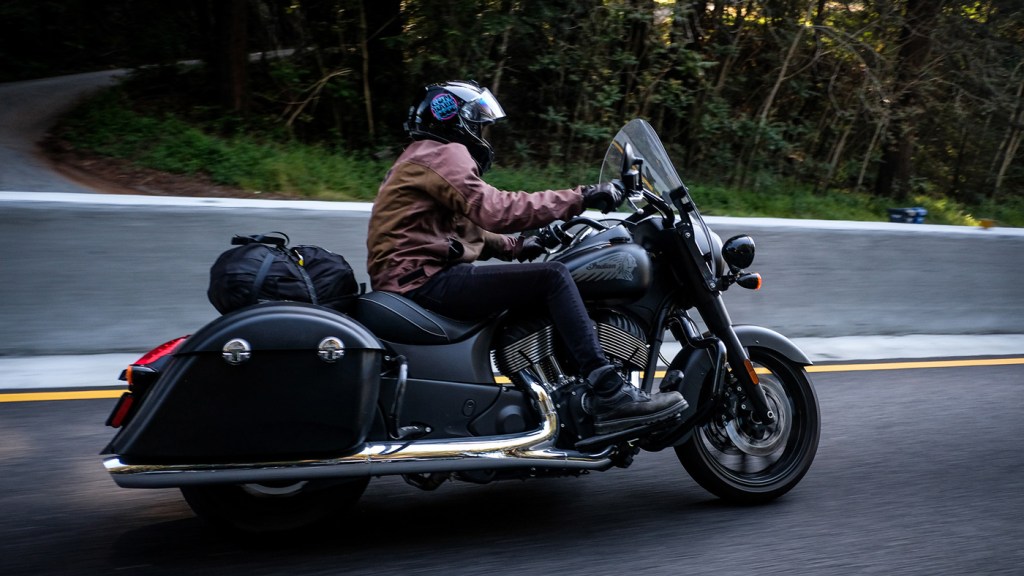 The S-turns through Gaviota State Park along U.S. 101 north of Santa Barbara; Interstate 280’s steady sweepers through lower San Francisco; the slinkiest sections of Fort Hunter Liggett Road as it accordions its way toward the Central Coast south of Big Sur—these three sections of tarmac stand out as the most memorable among the 1,648 miles I spent on the 2018 Indian Springfield Dark Horse. Why? Because this bike likes to lean into the curves.

Cruisers are usually never associated with leaning; however, when on the Indian Springfield Dark Horse, it didn’t matter whether I was countering the 826-pound creature at 15 mph through the tightest-wound sections of Fort Hunter Liggett or the undulating 80 mph sweepers of I-280—this bike behaved beautifully.

The cast-aluminum-frame Dark Horse yields to commands as though you’ve got reins on its front fender. After tracing a lovely arc through a bend in the road, I almost wanted to say to the bike “good boy.” Indeed, there’s something sentient about the way the Springfield Dark Horse tackles turns.

Since this heavy machinery surprises with its adept handling, it should behave even better on straight roads where cruisers conventionally do well, right? Well, not so much.

Jump onto the freeway, and one of the first things you notice about the Indian Springfield Dark Horse is that it wobbles. The Dunlop American Elite 130/60B19 tire up front and the Dunlop Elite 3 Multi-Compound 180/60R16 tire in back have a habit of digging into freeway grooves. As a result, the motorcycle shimmies, as if a wheel were mounted loosely. To a novice rider, this may be frightening, but if you have some miles under your boots, you’ll know there’s nothing to fear. Those who love to live on the edge may even like the way the bike sways under them. I, however, would like to see Indian nix this characteristic for next year’s model. I’ve never felt that kind of behavior on a Harley, and neither would I expect it on an Indian.

Although the groove-provoked shimmying never worried me, the high-speed shimmying did. On a downhill section of U.S. 101, while testing how the Dark Horse handles when near its V-max, I felt the bike drift into a speed-shimmy. The chassis’ lateral undulations were, at this point, concerning, but a gradual unfurling of the throttle made the Dark Horse happy again.

I only weigh 140 pounds soaking wet, so perhaps the instability would be less pronounced with a heavier rider. A six-inch-taller and 70-pound-heavier colleague of mine who has ridden the Dark Horse, though, tells me that he experienced a lot of that freeway wobble, as well, so it looks like some more handling work is in order on Indian’s end.

But if you don’t mind a little freeway wobble, and you never plan on passing 95 mph, the Indian Springfield Dark Horse is a great way to explore more of the country—that is, if you’re good at managing occasional gluteal pain. I was surprised that after about an hour my backside would start to ache, but it was nothing that a few lifts off the seat couldn’t cure—plus, can’t we all use extra exercise on those quad muscles?

If my knees ever started to feel stiff after more than a couple of hours of riding, relief was only a stretch away. The Indian Springfield Dark Horse is equipped with a well-integrated set of crash bars that are great for resting your feet upon when you need to stretch out on long trips.

And if you’re throwing a leg over for a jaunt across a pothole-addled city like San Francisco, you’re in good hands with the Dark Horse. You can ride over some of the biggest potholes on this machine and feel victorious. Do the same in a sports sedan, and you’re liable to crack a wheel.

With the way this stallion handles broken pavement, I was tempted to see how it would fare with a bit of light off-roading. During my final week with the Springfield Dark Horse, I was scheduled to attend Lightning in a Bottle, a camp-out music festival in Central California. Having been to the event twice before, I knew I’d have to travel about a half-mile on unpaved road to get to my campsite.

The model’s power-locking hard saddlebags are a welcome feature.  Photo by Sam Bendall.

Handling an 826-pound motorcycle on such terrain is not my idea of fun, but I knew I could make it to my campsite without issue. My confidence was due to what is perhaps the Indian’s best attribute: its electronic throttle tuning. Power never arrives abruptly on the Springfield Dark Horse, and that benefit is monumentally important when you’re maneuvering off-road. The last thing I needed was a sudden blip of acceleration mid-turn to wash out the rear end, but I felt assured that would never happen with how progressive the throttle is. Thanks to that smooth power delivery, I made it to my campsite unscathed.

I love it when motorcycles have features we often take for granted on cars. The keyless ignition, for starters, was like chamber music to my glove-sheathed hands. There’s nothing worse than having to fumble for keys after you’ve donned your riding gloves. Thankfully, the Dark Horse spared me that inconvenience. The bike’s power-locking hard saddlebags were a welcome feature, as well. When packing and unpacking my camping gear into them, fumbling was again reduced by my not having to stick a key in a hole to lock the saddlebags, which are generously sized. My left saddlebag was able to swallow a tent and sleeping bag, while, with room to spare, the right-side unit stored my sleeping pad and some extra jackets. I only needed to strap a regular-sized backpack to the rear fender so that I could carry a week’s worth of clothing, toiletries, and water. Who says you need an SUV to camp?

The Indian Springfield Dark Horse comes with electronic throttle tuning for bolstered confidence when the road is unpaved.  Photo by Sam Bendall.

Back on paved roads and after five days of festival life, I was in a hurry to get back home to LA. The Dark Horse’s 111-cubic-inch Thunder Stroke V-twin brings 119 ft lbs of torque, which I most appreciated around town. Grunt arrives down low, which I find relaxing and effortless, and those are the types of sensations you want on a cruiser.

So for $21,000, is the 2018 Indian Springfield Dark Horse the bike to buy in this segment? I enjoyed my time on it, but I’m still more impressed with the Harley-Davidson Road King Special, which has a base price that’s $1,000 dearer than the Indian. But, if you’re a rider who wants your cruiser to lean, look no further.