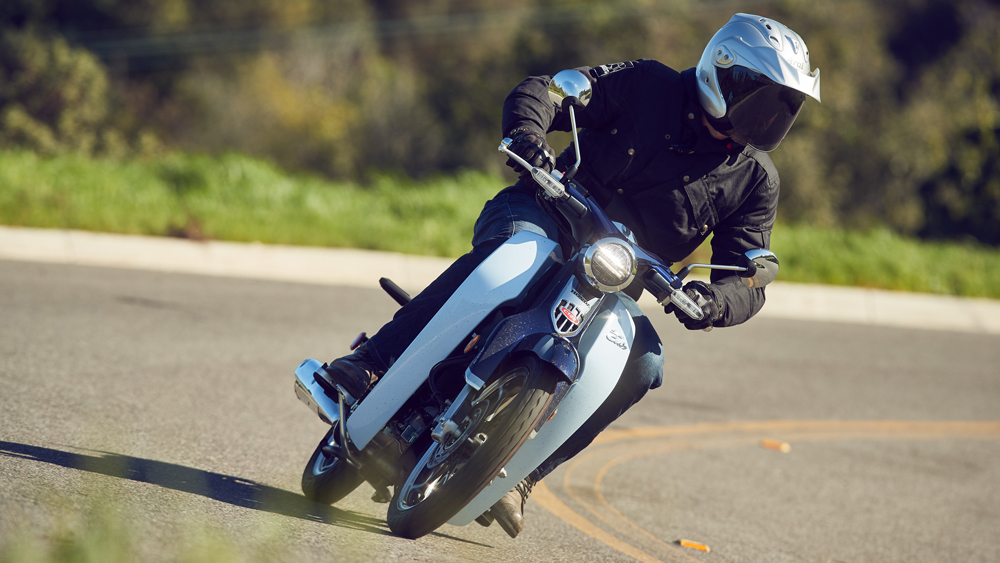 The original, 49cc, three-speed Honda Super Cub, is the machine that created the Honda Motor Company. Since its debut on the world stage back in 1958, Honda has sold over one million Super Cubs across the globe. American Honda’s greatest advertising slogan of last century, “You meet the nicest people on a Honda”, centered on the Super Cub. It helped to bring in levels of money that could be measured by the cubic ton, and pushed Honda into the realms of global automotive titan, rather than just another automotive manufacturer.

American Honda stopped bringing the Super Cub into the country in the early 1980s, although the Honda Motor Company in Japan continued to develop the step-thru motorcycle and sell it around the world with stunning success, particularly in Southeast Asia, where it reached a cult status across a seemingly ageless demographic.

The good news is that not only has Honda created a new Super Cub, now with a 125 cc power plant based off their Monkey Bike, it’s also here in the U.S. American Honda has, thanks to the explosion of small-bike culture they helped start with the enormously successful 125 cc Grom, seen fit to once again grace Stateside city roads and streets with the Super Cub. Retailing at an attractive $3,599, the new, four-speed, ABS-equipped 2019 Honda C125A Super Cub is a charming little machine.

The step-thru design, originally conceived to ensure female riders would welcome it back in the late 1950s, makes riding a joy. It’s a fusion between motorcycle and scooter, and a perfect beach or inner-city errand companion, as its top speed of around 60 mph will ensure you stay off the freeways.

There are some modern touches to the new Super Cub, such as a gear position indicator and keyless ignition, but the original design that made the machine so popular still seeps through.

The Super Cub runs a semi-automatic gearbox with a heel-toe clutch system, so even though you are still changing gears yourself, there’s no clutch lever and you can roll to the lights in any gear you like and not stall. It’s an idiot-proof design, one that’s stood the test of time for over half a century. Indeed, the Super Cub as a whole has done just that. The Cub’s simplistic design, delightful personality and sheer ruggedness has, for many, allowed the dream of personal mobility to become a reality.

It may not be as important to everyday life here in the US as it is in many developing countries, but the fact we can all enjoy the Super Cub once again in North America (and as a new model) is a fine move by American Honda indeed.