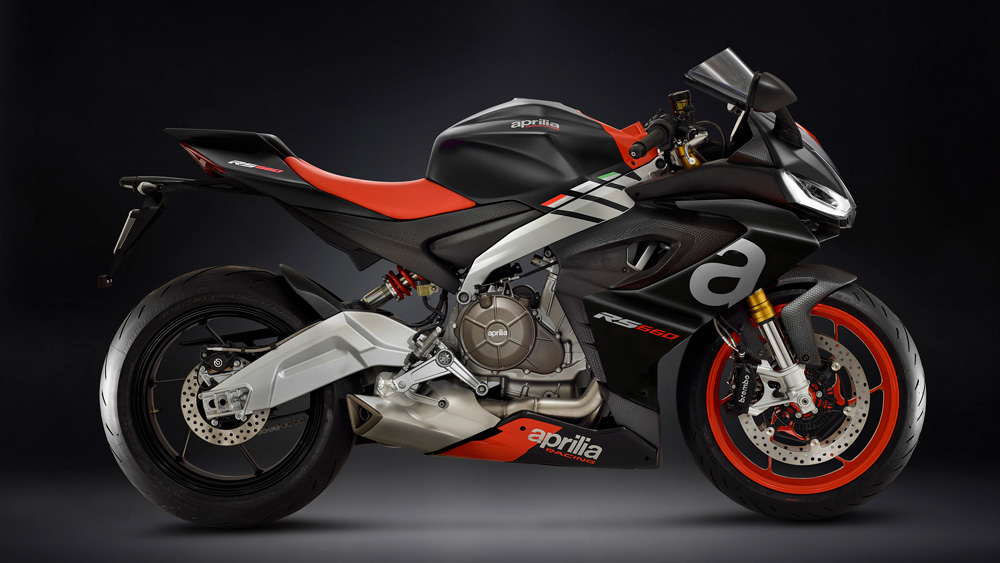 Italian manufacturer Aprilia used the recent EICMA Show in Milan to launch one of their most important motorcycles in years—the RS 660. Powered by an all-new 660 cc twin-cylinder four-stroke, the RS 660 harkens back to Aprilia’s early days as a manufacturer that built its name not on high horsepower superbike monsters, but svelte, lithe machines that hunt racetrack apexes and twisty mountain roads for breakfast.

As such, the motor produces a respectable 100 hp. The motor is essentially the front back of cylinders from the RSV4 1100 Factory, the raucous superbike we tested at Mugello earlier this year, with Aprilia claiming the motorcycle weighs just 372 pounds (without fluids).

That should give it a real-world weight of close to 400 pounds, which should make for a delightful canyon carver or Twins Cup racer.

The 2020 Aprilia RS 660 gets a twin-spar aluminum chassis mated to a 41 mm Kayaba fork and shock, with the latter acting directly on the swingarm with no linkage. Brembo has fitted their M4.32 front brake calipers and twin 320 mm discs, mitigated by ABS.

The bike is powered by an all-new 660 cc twin-cylinder four-stroke.  Photo: Courtesy of Aprilia.

Despite being only a mid-size sport bike, the RS 660 gets the full gamut of Aprilia’s electronics suite in the Aprilia Performance Ride Control (APRC), a system normally found on the full-house RSV4 1100 Factory. With APRC, the RS 660 benefits from variable traction control, wheelie control, engine brake control, five different ECU riding modes and an up and down quick shifter, plus cruise control. The latter two features are some that even motorcycles nearly twice the price (such as the 2020 KTM 1290 Super Duke R) don’t come with as standard, making the RS 660 a very tasty prospect indeed.

The RS 660 has Aprilia’s full suite of electronics.  Photo: Courtesy of Aprilia.

What we don’t yet know is the price and availability of the 2020 Aprilia RS 660 and it’s unlikely we’ll see the machine in the US until fall of 2020. What we do know, however, is that if the bike comes in at under $12,000 MSRP, the Aprilia factory in Noale, Italy, won’t be able to make them fast enough.

For now, Aprilia should be congratulated for making a sport bike for the masses, and we have no doubt the RS 660 will eventually go on to replicate the success of the legendary Aprilia RS 250 from the 1990s.