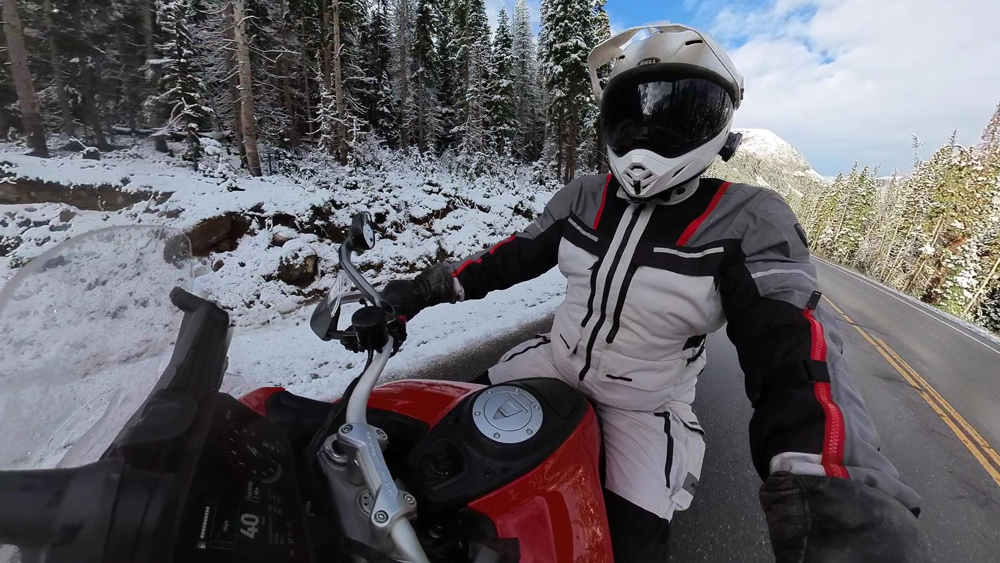 The morning dawned clear and cold at the Beaver Run Resort in Breckenridge, Colo. It was go time for Ducati’s inaugural Giro (“Tour”) Alpino event for Ducati Multistrada motorcycle owners. As the riders filtered into the parking lot, they discovered that a fine layer of frost had coated their Italian machines overnight. While the sky was blue and the forecast called for mild temperatures, there was a hint of worry in the air as snow on the nearby peaks of the Rocky Mountains had also materialized following thunderstorms the night before. Participants readied their bikes, plumes of condensation emanating from motors warming up in the 35-degree air.

The big question: With the ride starting at almost 10,000 feet in elevation, the now very visible snow line was just above that, and the route was heading up in elevation. Ducati North America CEO Jason Chinnock, a part-time Colorado resident who was on hand for the ride, assured the group that, yes, while it had snowed overnight and temperatures were now at the freezing point, the roads ahead were scouted and found to be wet but clear of snow and ice—for the most part—and the pace would be cautious. Riders piled on layers, winter gloves and neck warmers before mounting their steeds, often looking more like helmeted skiers than motorcyclists. I saddled up Ducati’s Multistrada V4 S and immediately set both handgrip and seat warmers to maximum.

As our convoy entered the snow zone on motorcycle tippy toes, the pavement remained wet rather than frozen, although on some shaded stretches there was a thin stripe of snow down the center divider of the roadway. And more snow on the shoulder narrowed the already tight lanes. Helmet cams rolled and passengers held cell phones aloft to record the wintry scene as the line of 30-odd Ducatis were enveloped in an early winter wonderland of white-flocked trees and snow-clad summits kissed by sunshine. It was a unique and beautiful start to a ride, despite the temperature reading on the dash of 31 degrees. I put the bike into Rain mode and applied throttle gingerly.

The road, though, stayed free of ice, likely from the heat it held from the previous week of 60-degree temperatures, and we soon began to drop in elevation as we headed towards our turn onto Highway 285 and the eventual climb towards 11,670-foot Guanella Pass. The temperature ticked up, as did the pace. Turning onto Guanella Pass Road, we were finally warm and primed to enjoy the buffet of curves ahead. Instead, we ran into an unexpected obstacle—traffic.

Not only had the first snow graced the Rockies, but a particular species of tourist had also flocked to the mountains on this cold Saturday morning: leaf peepers of all ages, and their innumerable dogs, spilled from cars parked bumper to bumper along each shoulder of the small twisting road, all seeking to bathe in the golden autumn glow of thousands of aspen trees filled with yellow and orange leaves that would soon be blown into the winter cold. Progress became painfully slow as long lines of cars slowed to walking speed while jockeying for spots on the roadway’s shoulder since all the parking areas were overwhelmed. Foliage fans even stood in the road obliviously, smartphone cameras pointed in every direction.

In time, the leafy traffic snarl subsided, but there would be no Zen-like flow of Ducatis through the corners on this leg of the route as we crept through still crowded hairpins into Georgetown for a fuel stop and leg stretch.

Once our collective was back in formation, we briefly blasted down Interstate 70, exiting for another alpine climb to Granby. The road was finally clear and I snapped the V4 S into Sport mode as the highway, now dry and bathed in sunshine, curled and rose up into the mountains. It was time to dig deep into the Multistrada’s power reserve. The V4 S, given permission to stretch and run, leapt forward under throttle, the tires clawing for grip around hairpins and sweepers, the exhaust note transitioning from burble to snarl to a howl as the needle jumped across the speedo on the straight sections before triple discs gripped by Brembo calipers quickly scrubbed off velocity.

The group reformed in Granby and continued along curvaceous Highway 40 towards Kremmerling, with temperatures now in the mid-50s. But weather in this region is ever-changing and, not ten miles later, raindrops began pelting our face shields. The squall eventually rolled east as a cadre of us rolled along swirling Highway 134, a tiny two-lane stretch that ascended to Toponas flanked by lines of tall and shedding aspens.

In time, we explored Trough Road, tracing alongside the Colorado River before turning south for the home stretch to Breckenridge. Heavier traffic had me setting the Multistrada V4 S to Tour mode and engaging the bike’s novel radar-driven Adaptive Cruise Control system that regulated the motorcycle’s speed depending on what the vehicles ahead were doing. It seemed odd at first to have the bike be in control, but with the seat heater set to low and music playing through a Cardo EDGE comms system in my Bell MX-9 Adventure helmet, I got used to it quickly, and even had a nice chat with my mother via the setup. Ah, technology.

Soon enough, we were back at Beaver Run, and after a quick change out of my Rev’IT! riding ensemble and TCX Infinity 3 riding boots, I joined the group in the resort’s Imperial Ballroom for a debrief with Chinnock followed by a sumptuous dinner spread.

Asked why and how this new Ducati event came to be, Chinnock told Robb Report that he had gone on a similar ride recently in Mexico and was taken by the camaraderie and experience of the adventure. That particular jaunt included more off-road terrain, which is better suited for Ducati’s newest Multistrada model, the 2023 V4 Rally. Once back stateside, Chinnock began brainstorming small group-ride ideas with his team and the first Giro Alpino took shape. If you’re a Multistrada owner that missed out, fret not. There will be an opportunity to explore more of the Rockies with Ducati in 2023.