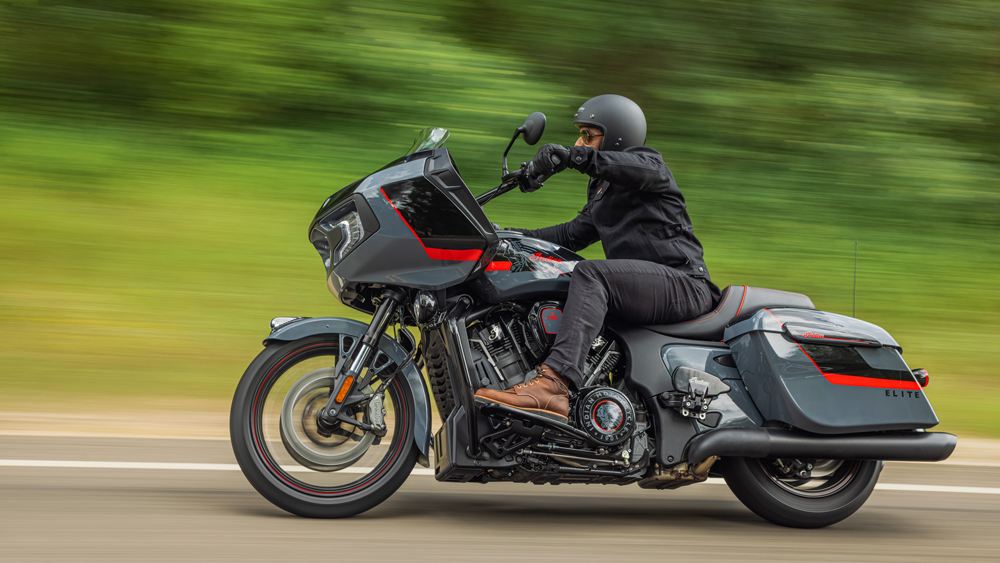 Within the motorcycle industry, the bagger has become ubiquitous, inspiring manufacturers around the world to jump into the burgeoning category. The style is so popular that it has inspired a race series dedicated to model, a bike with a low slung, bulged-out design, not to mention a cottage industry of aftermarket companies seeking to draft on the trend.

Embracing the concept while shirking its ubiquity, Indian Motorcycle, maker of popular models like the Scout, has announced two limited-edition baggers: the Challenger Elite ($34,999) and the Chieftain Elite ($32,999). Think of the pair as of the world, but not in it, embodying the genre’s signature elements while limiting production to 200 examples and 150 examples, respectively.

Standing apart from off-the-rack models, the Challenger Elite claims inspiration from American muscle cars, with gray-and-black metallic paint offset by red accents and a red top-stitched saddle. Packed into the 18-gallon saddlebags are speakers linked to an upgraded 400-watt PowerBand sound system. Controlling the audio is a seven-inch touchscreen with Apple CarPlay, navigation and a connected Ride Command+ system with live traffic information, weather overlays and a feature that tracks the bike’s location.

The Challenger is the hot rod of the duo, packing a 108 cubic-inch PowerPlus V-twin engine that churns out 122 hp and 128 ft lbs of torque, figures which rival some small cars. A suite of electronics includes preset ride modes to manage throttle mapping, traction control and the anti-lock brake system.

The rarer Chieftain Elite is based on the more traditional platform, which incorporates an air-cooled Thunderstroke 116 (1,900 cc) V-twin that produces a thumpy 126 ft lbs of torque. Finished in what Indian dubs Heavy Metal Smoke paint, the matte surfaces are accented by bronze touches on the tank’s Indian headdress, saddlebag latches, center console, primary cover and airbox. Engine bits receive oil-rubbed bronze as well, while the sharp-edged fairing flows with the bike’s lowered stance and machined wheels. Like the special-edition Challenger, the Chieftain Elite includes a 400-watt PowerBand audio system and ABS, keyless ignition, tire-pressure monitoring and 18-gallon, remote-locking saddlebags.

Available options on both bikes include heated and cooled two-up seats, a luggage collection and a further upgraded sound system that pumps 800 watts of power. But the more unique selling point is that, unlike with most other baggers, you likely won’t see another one coming as you rumble down the road.