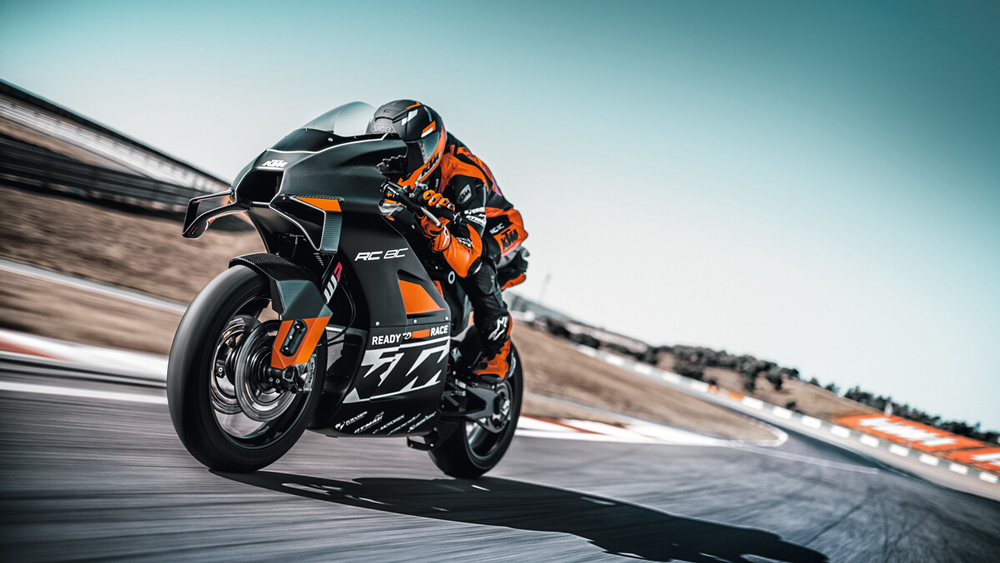 Modern motorcycle manufacturers do not construct purpose-built race bikes, at least not in the same way they did in the 1970s and ‘80s, when anyone with the means could purchase a Grand Prix machine. However, it seems that no one has informed KTM of this. Last year, the Austrian powerhouse, maker of the 1290 Super Adventure R named Robb Report‘s Best Motorcycle of 2022, put the industry on notice when it unveiled the first version of the RC 8C—a purpose-built track star in a category of its own, and from a major brand to boot.

Fast forward one year and the now $39,599 model has been bolstered with engine and aero tweaks to keep it at the head of a pack that ultimately has no one else in it. Limited to only 200 examples, the 2023 RC 8C retains the 889 cc parallel-twin-cylinder motor originally intended for KTM’s 890 Duke and 890 Adventure series, but there’s been a number of upgrades. Changes to the power plant include larger throttle bodies, a new clutch, titanium conrods, inlet and exhaust valves and a gorgeous new titanium Akrapovič exhaust.

On the chassis side, the racing-spec WP APEX PRO 7643 closed-cartridge 43 mm fork and WP APEX PRO 7746 shock now sport slightly softer springs. This allows for more pitch under braking and provides the opportunity to work the front tire harder for more precise feedback on the initial turn in to the apex.

The 2023 RC 8C also sports slightly revised winglets sitting underneath the handlebars to aid in braking and acceleration stability, although KTM has declined to mention just how much extra downforce the new winglets produce. As for electronics, there are two throttle maps—PW1 for full power and PW2 for a softer throttle response. Additionally, traction control has nine different settings, while engine brake control has two stages. And, of course, there’s an up-and-down quickshifter for clutch-less, full-throttle gear changes. A revamped dashboard, with a GPS data-logger, also features the same handlebar switches as the ones found on Brad Binder’s RC16 MotoGP racer.

There have been no changes made to the main chassis itself, which is still the tubular-steel design originally developed on the Kramer GP2. While yet to pilot the newly revised KTM RC 8C, I can lay claim to having raced a Kramer GP2 and found it quite astonishing. The GP2’s lithe weight and the friendliness of that motor deliver a track experience that a four-cylinder super-sport machine can’t come close to.

Considering that the latest KTM RC 8C has benefitted from two years of development in the hands of former Grand Prix race winner Jeremy McWilliams, we can only imagine how good the bike will be. As for demand, all examples of the track-only model could be spoken for seemingly faster than the lap times it’s capable of producing.