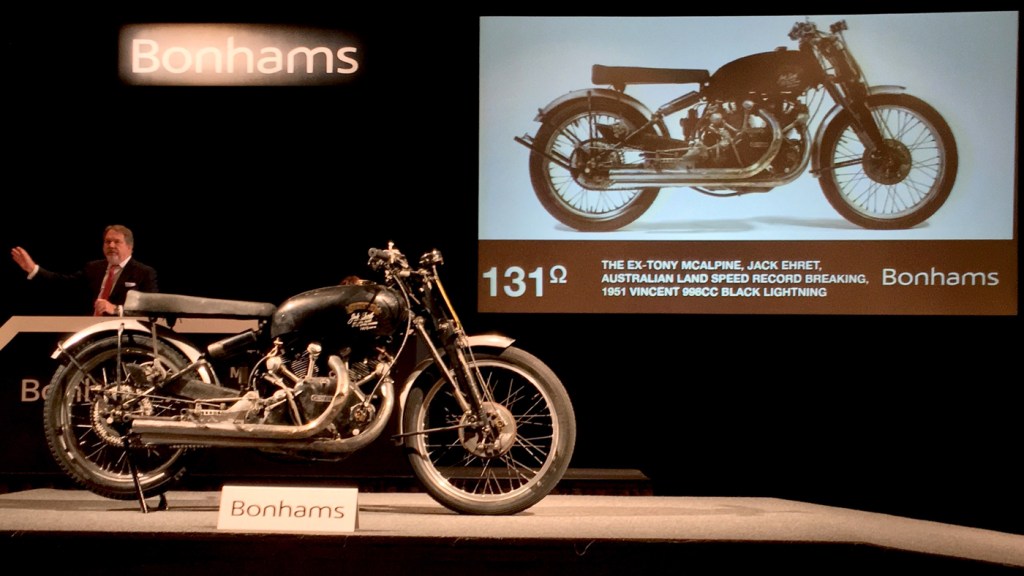 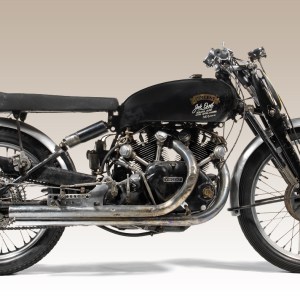 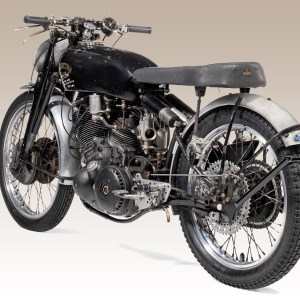 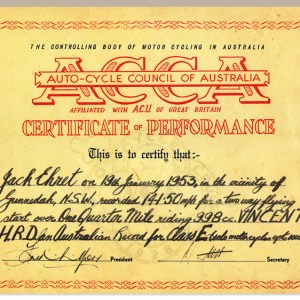 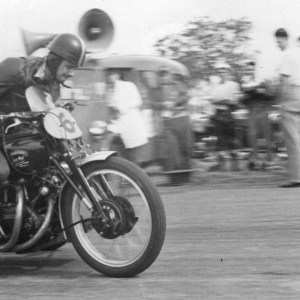 The black motorcycle looks like something found deep in a dusty garage, the perfect vintage restoration project or debut bike for an aspiring rider. My, how photos can deceive. In reality, the 1951 Vincent Black Lightning in question is nothing short of a haloed two-wheeled icon, which explains why it recently fetched a record-breaking $929,000 at Bonhams’ Las Vegas auction on January 25.

While the legendary British company only made 30 Black Lightning bikes, this particular example proudly wears its unique accomplishment on its gas tank. There, etched in fading white paint, is a curt description of its crowning achievement at the hands of its longtime Australian owner, “Black Jack” Ehret: “Holder Aust. Land Speed Record, 141.5 mph.”

The bike that set the Australian land speed record in 1953 reached another benchmark—the most expensive motorcycle to sell at auction.  Photo by William Mees, courtesy Bonhams.

A year after being imported Down Under by Isle of Man racer Tony McAlpine, the 998-cc Vincent was put in the history books by Ehret’s astounding high speed run. Pushing close to 150 mph in a modern, closed sports car already requires nerves of steel, so notching that speed on this engine-on-wheels truly beggars belief and helps explain the record bid, which tops a previous high of $775,000 paid in 2015 for a 1915 Cyclone board track bike once owned by Steve McQueen.

“The successful bidder [of the Ehret Vincent] is only the sixth owner, and he has bought a machine with an extremely high level of integrity,” says Ben Walker, Bonhams’ head of motorcycling. “Only 19 matching numbers examples of Vincent Black Lightnings are known to exist, and this is one of the very best in terms of patina and originality.”

When new, Vincent Black Lightnings were only available by special order and came with a tachometer, Elektron magnesium alloy brake plates, racing tires on alloy rims, rear-set foot controls, a solo seat, and aluminum mud guards—all of which reduced the bike’s weight to 360 pounds, or almost 100 pounds less than the Vincent Black Shadow. Special tuned, 70 hp engines and a beefed-up four-speed gearbox gave it greater speed.

Walker adds that any Black Lightning is considered the ultimate trophy for a motorcycle collector, but this particular one is a “blue chip” example with lasting appeal. What’s more, Australian motorcycle aficionados will be pleased to know that the Ehret Vincent was bought by a compatriot and is heading home.