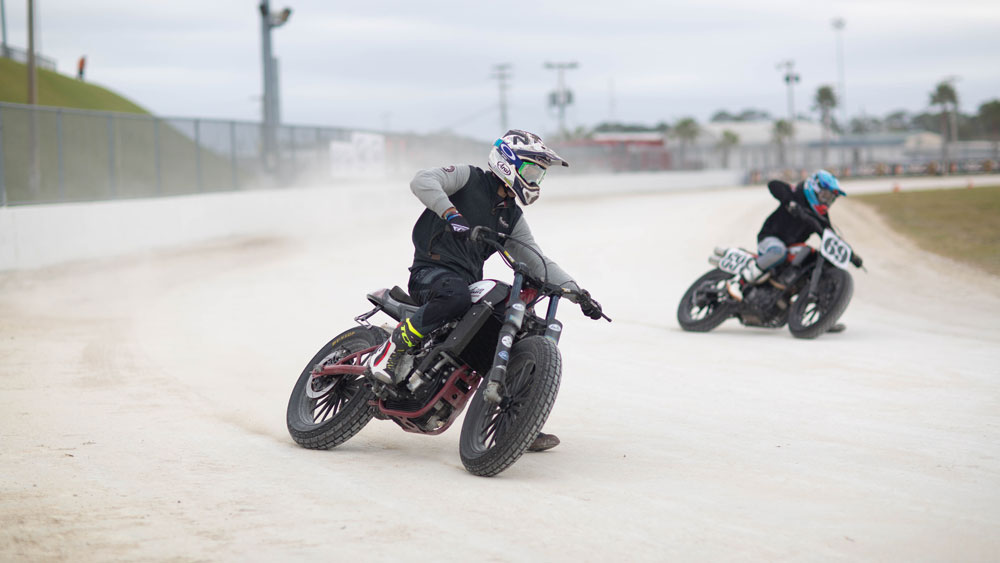 Johnny Lewis presents a lesson on posture that encompasses a whole new way of riding a motorcycle. Turning 30 years old this summer, Lewis has competed professionally since his teens and can do it all, from supermotos to road racing. Here, on a hard-packed quarter-mile just outside Turn One of Daytona International Speedway’s great tri-oval, he shows a handful of us—street riders, all—how to pitch the bike into a turn. We’re trying to skid and slide the new Kawasaki KLX 140 dirt bikes he has provided, and then accelerate again, without laying them down.

“Crack on crack,” Lewis says, meaning we should sit far forward on the saddle and scoot way over to the right. “Stay on top of the bike,” he continues, straightening his left arm. “Keep pushing it down.”

This is how American Flat Track professionals do it: head up, back straight, right elbow raised, right knee against the tank, and firm left hand pressuring the handlebar. Oh, we can use the Kawasaki’s rear brake if necessary, but even touching the front one will project the rider over the bar.

“I like to imagine the right hand and left foot being connected by a string,” Lewis says. By this he means that rolling the right hand out of the throttle at the entrance to the turn should also bring the rider’s left leg off the footpeg, the sole of the boot skimming over the track surface as a kind of outrigger. Of course, flat-track racers have steel-clad left soles to reduce friction; we’re doing quite well with conventional Dainese boots.

Hearing one’s foot judder over the decomposed limestone isn’t the only odd element in all this. The last thing a street rider wants is a wagging rear wheel, but because of the track’s marbles, the Kawasaki’s tire spins under acceleration and the bike twitches. Keeping the left arm straight and left leg arm extended makes for unexpected security, though, and the bike’s momentum carries through the turn. By the end of the next straightaway, the small single-cylinder engine hits the rev limiter in third gear, and an overactive imagination has us riding a snorting 450 cc entry in the AFT Singles class. For that matter, the object of our wildest dreams is a wicked 750 cc twin in the series’ upper division.

Flat-track racing was a staple on fairgrounds a century ago. The sport went into eclipse as motocross and road racing grew in popularity. But a change in series ownership and new investment brings flat-tracking back to our attention. The 2019 AFT season opener is March 14 at Daytona, and all 18 races will be televised.

Meanwhile, important American, European, and Japanese manufacturers are involved. While the 450 cc singles are production-based bikes, the larger twins are race-only creations.

A few trendy customizers have taken inspiration from the sport and adapted various maker’s products to fit the minimalistic outlines, even eschewing a front brake to match the racing bikes. Some production motorcycles for street use have evinced a “flattened” style. Ducati, the latest to join the AFT series, offers the Scrambler Full Throttle complete with side number holders for $10,995. The Indian FTR 1200 and FTR 1200 S—which generated a buzz upon their reveal last fall at the Intermot show in Germany—go on sale this spring for $13,499 and $15,499.

Enthusiasts with a DIY penchant can purchase a used supermoto bike like the Suzuki DR-Z400SM and mount 17-inch wheels carrying fat tires. As journalist John Stein explains, “They would have the closest thing on a budget that would replicate the spirit and feel of a flat-tracker.”

The American Flat Track season kicks off with the Daytona TT taking place next Thursday, March 14 (covered live on FansChoice.TV). It will be rebroadcast on NBC Sports Network on March 24.

Whether it’s to watch on television or in person, or to get out and ride, flat-track racing and the motorcycles deriving from it further the mystique and heritage of an indigenous American sport. With the present-day marketing savvy and timely product development, watch for this old game to become a new movement.