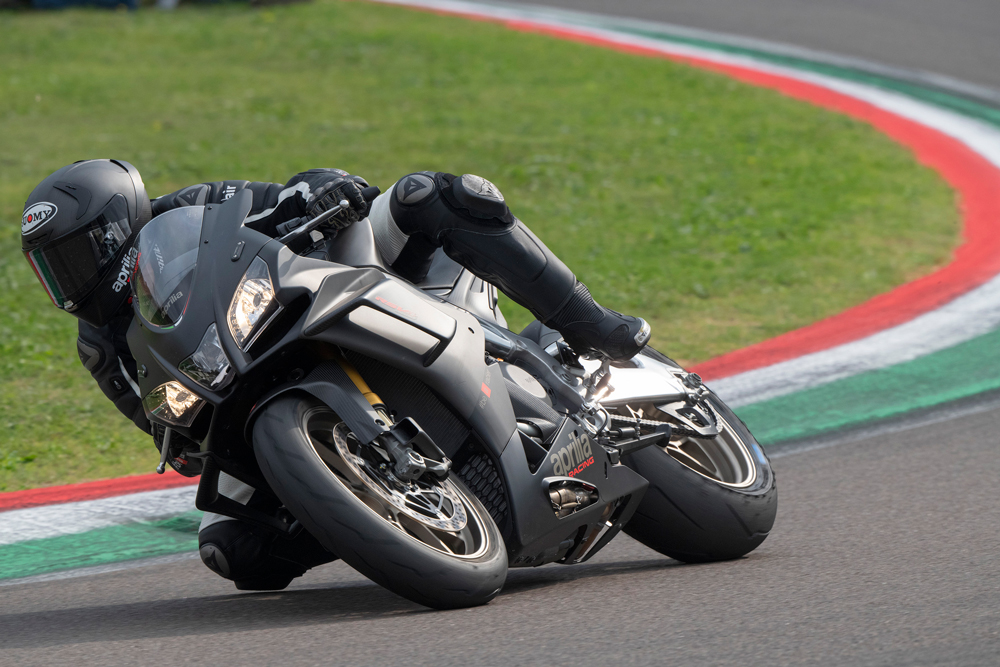 The 3.259 miles of tarmac spaghetti that comprises the Mugello MotoGP circuit, about an hour’s drive northeast of Florence, Italy, is one of the few racetracks in the world where you can genuinely turn a 1000 cc superbike up to 11. Its straight, near 0.7 miles in length, will highlight a motor’s strengths and weaknesses in plain sight. Therefore, it’s a good thing I have Aprilia’s RSV4 1100 Factory superbike beneath me.

My pupils dilate. I click sixth gear. Throttle pinned to the stop. The RSV4 scorches over the pit lane exit paint and I see 300 km/h (186.4 mph) flash up on the dash. The Aprilia’s velocity is perfectly matched to the roar from the titanium Akrapovic exhaust, which provides a soundtrack so good, so gruff, so damn mean, it should be bottled and sold. That’s what unleashing 217 hp down one of MotoGP’s most iconic strips of asphalt feels like. It’s a life altering experience.

It is hard to believe the Aprilia RSV4 has reached a decade in production. This is a machine that can lay genuine claim to being the best superbike of its generation, with three World Superbike Championship titles to its credit and hundreds of other race and championship wins across the globe. Its 65-degree V-4 is a masterpiece of compact engineering, producing torque like a V-twin and a top-end power rush like an inline four. It’s the ideal superbike powerplant, and for 2019, the RSV4 grows from 999 cc to 1078 cc for the $24,495 Factory edition we rode at Mugello.

The 1100 Factory buyer will not just get more power for 2019, but the brilliant Aprilia Performance Ride Control electronics suite that houses adjustable traction, wheelie and launch control as well as a pit-lane speed limiter and ABS. The bike also benefits from revised top-grade Öhlins suspension; Brembo Stylema brake calipers, and winglets. Yes, winglets.

The bike’s titanium Akrapovic exhaust provides a serious soundtrack to the action.  Photo by Milagro.

The RSV4 has always been one of the most dynamic, nimble superbikes on the market, with the kind of steering preciseness normally reserved for machines half its size. However, that agility is now matched to winglets on the side of the carbon-fiber bodywork, whose inspiration is taken straight from Aleix Espargaro’s MotoGP Aprilia RS-GP MotoGP racer.

At 186 mph, the winglets will produce 17 pounds of downforce on the front wheel, keeping it in touch (sometimes) with the tarmac and allowing for a reduction in rapid weight transfer when you hit the brakes. We did not do a back-to-back test of winglets vs no winglets at Mugello, so it’s hard to decipher a distinct advantage. However, one thing is for certain—the RSV4 1100 Factory is rock solid at high speed. It doesn’t get flustered when speed goes north of 180 mph—it’s a powerful, carbon-fiber bullet. At road speeds, the winglets will make next to no difference. Just like bolting a spoiler on a trunk won’t make any difference for a car below 100 mph. But, hey, the RSV4 certainly looks the part, and that’s half the reason you buy it in the first place.

One of the most dynamic, nimble superbikes on the market.  Photo by Milagro.

Piero Soati, Aprilia’s head of Body and Chassis Engineering, told Robb Report that a new RSV4 will be coming to comply with the 2021 Euro 5 emissions laws. With that being the case, the 2019 RSV4 1100 Factory represents the ultimate evolution of the Noale-built superbike, and is a fine way to cap a decade of stellar performance and unmistakable Italian style.