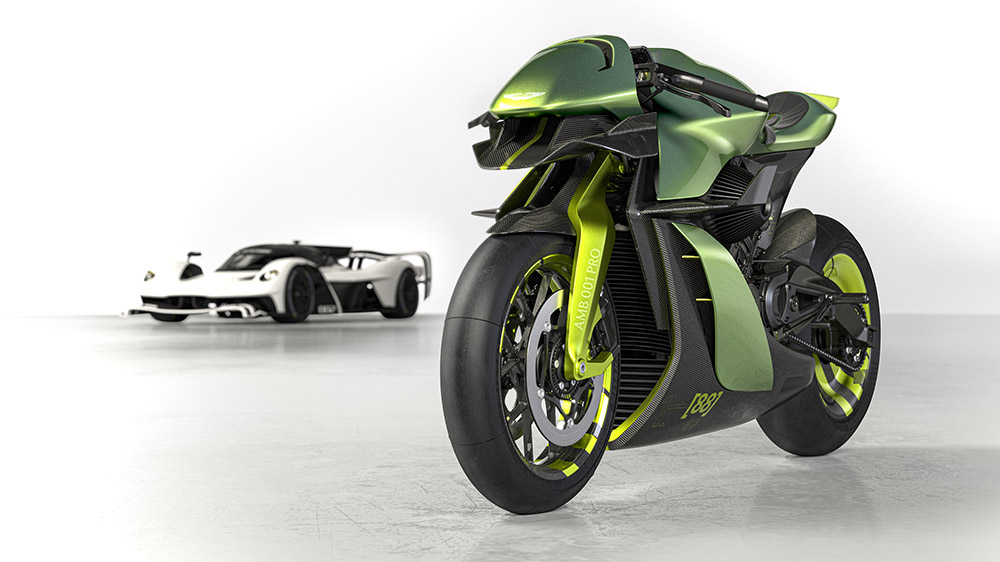 Aston Martin is returning to the well for inspiration.

The British marque has teamed up with Brough Superior for a new track-only hyperbike called the AMB 001 Pro. The company’s latest two-wheeler is again inspired by the Valkyrie hypercar and offers a significant performance bump over its predecessor.

Aston Martin and Brough Superior unveiled their first bike, the AMB 001, in 2019. Deliveries didn’t begin until earlier this year, but it’s hard not to be impressed with the automaker’s first attempt at a two-wheeler. The new version takes what was already an attractive package and attempts to improve upon it.

This starts with the design. The two bikes look quite similar to one another, but the aerodynamics have been refined some. The new nose cowl is attached to the rest of the body this time around. As you ride, air enters the large intake, passes through the cowl and is then deflected over the rider by the windshield. There’s also a new front spoiler, side wings and aero stabilzers that increase downforce. The will be available in a single racing-style livery that pairs Verdant Jade with carbon-fiber and black accent work.

The biggest change, though, sits in the engine bay. The AMB 001 Pro is powered by an all-new 997-cc mill with a crankcase fully machined from a single billet of aluminum. It offers 25 percent more power than the AMB 001’s engine, pushing the bike’s total output to 225 hp and its power-to-weight ratio to 1.28 hp/kg, which is not far off that of a Formula 1 race car (1.4 hp/kg).

“When you push something to the very edge of capacity, and do it seamlessly, the resulting experience can have you breathless,” Marek Reichman, Aston Martin’s executive vice president, said in a statement. “There is no separation between the advanced materials, design and technical capabilities of the bike. We’ve achieved this fluidity again with Brough Superior for those who desire a track superbike like none other. The rider is part of this moving sculpture and will literally feel as though they are part of the track when laying atop the AMB 001 Pro”.

If you’re familiar with how Aston Martin prices its four-wheeled vehicles, it won’t come as a surprise that the AMB 001 Pro is expected to cost a bundle, especially since only 88 examples will be built (12 fewer than its predecessor). No firm pricing has been announced yet, but expect it to come in north $120,000 the AMB 001 cost. Hypercars don’t come cheap and neither do hyperbikes.