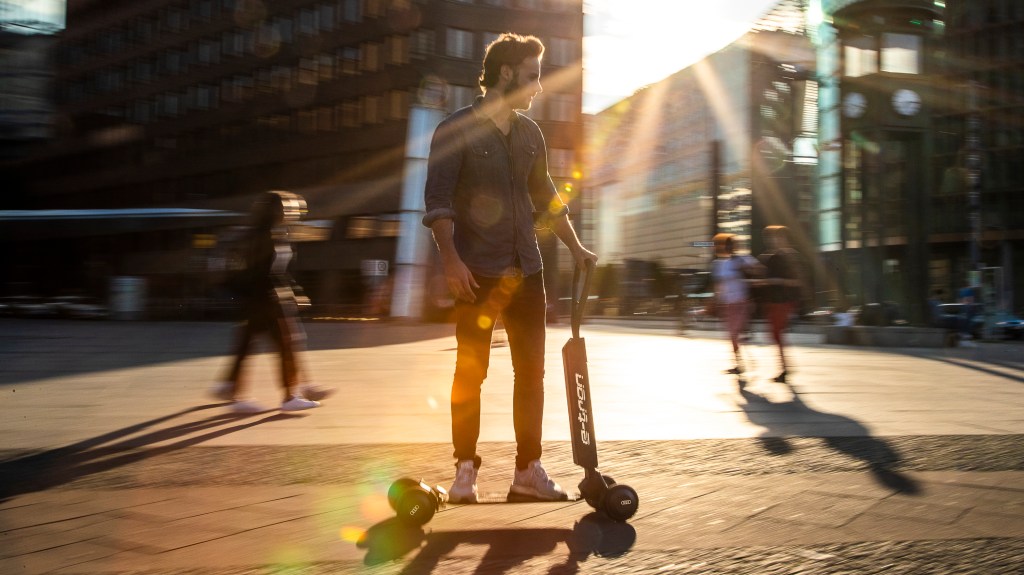 It’s no secret that electric scooters have exploded over the last couple years—thanks, in no small part, to the emergence of rental companies like Lime and Bird. But that success has also led to a rise in concerns over scooters’ safety. Last year alone, e-scooters were reportedly to blame for 1,500 injuries and deaths.  Now, it appears that engineers at Audi have been paying attention to those statistics. On Monday, the German automaker unveiled a new e-tron scooter that seeks to remedy one of the major issues plaguing scooters: bad communication.

With most current electric scooters, riders need to use both hands to steer, making even simple hand signals a risky maneuver. But Audi’s new skateboard-inspired scooter has a specially designed steering handle that allows for one-handed use, freeing up the rider’s dominant hand to let other riders and drivers know exactly where they’re headed. The handle also controls acceleration and braking thanks to a simple twist grip. In addition, the steering unit houses the scooter’s battery and features a display that shows how much power is left.

Single-hand operation of the e-tron is possible, in part, because of its four-wheel design. As with a skateboard, riders control the direction of the scooter by shifting their weight, something the German automaker said feels like “surfing waves.”  The scooter’s movables axles allow riders to negotiate even tight turns, according to the company.

Weighing in at 26 lbs., the e-tron won’t be too onerous to carry. It can be folded up for storage in the trunk of a car or conveniently pulled by its rider like a trolley. It’s 12.5 mph top speed and 12.5-mile range may sound modest, but those specs are also in line with the competition, like the BMW E-Scooter. A hydraulic brake at the back of the scooter will help slow you down smoothly.

The e-tron is currently slated to go into production and hit the market next year. Audi currently plans to sell it for €2,000 (about $2,250). Of course, the press release from the company hinted that the scooter might be included with the purchase of the e-tron SUV.  So now you know which SUV your kids will be voting for.

Check out more photos of the scooter below: