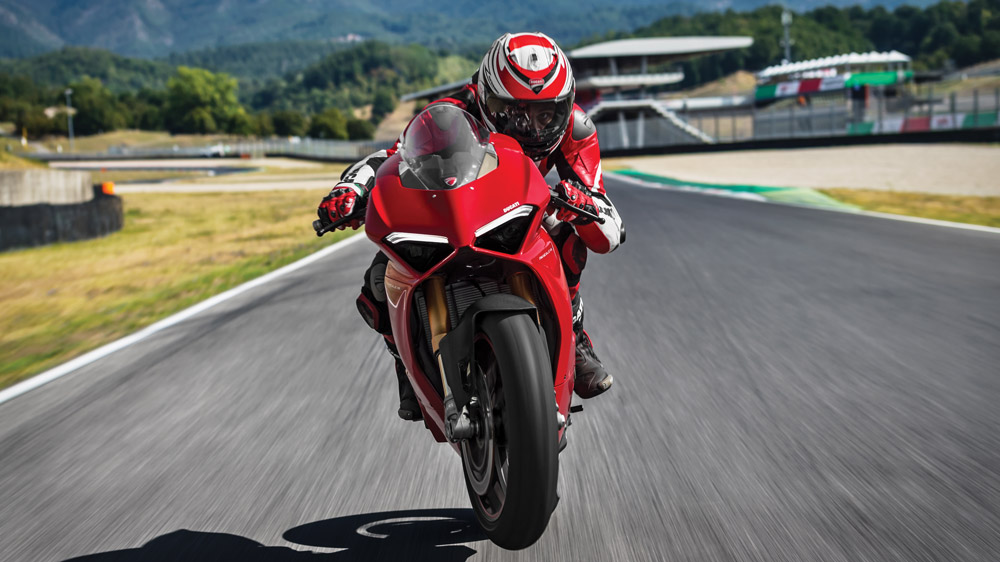 Ducati’s announcement that it would transition from its traditional big-twin engine to a V-4 had the brand’s loyalists on high alert. The Ducatisti were understandably concerned that the outgoing L-twin’s thumping torque and distinctive staccato exhaust note might be lost in the name of progress. But the new V-4 engine—which broadcasts a reassuringly robust song bearing a striking resemblance to its predecessor’s—marks a revolutionary shift that has helped Ducati earn our Best of the Best accolades for its new Panigale V4 S superbike.

The V-4 engine’s improvements are undeniable: Power delivery is now distributed more evenly across a 15,000 rpm range, and riders (not to mention racers) will find that accessing the Panigale’s 214 horses is a considerably more approachable endeavor that invites even more enthusiastic throttle twists. Gone is the predecessor’s off-the-line jolt of torque, replaced with an even-keeled thrust that pulls the Ducati ahead with a tractor beam–like force in virtually any gear, lending it a linearity that inspires a newfound sense of confidence.

Aiding agility is a counter-rotating crankshaft, which reduces the engine’s inertial forces and helps the 384-pound (dry weight) bike change direction more easily. Also assisting are complex electronic systems that include traction, stability, and wheelie controls managed by 6-axis sensors, as well as a novel feature that translates a firm stab of the rear brake into a controlled skid, which helps position the bike for entry into low-speed corners.

Our track test of the bike—at Spain’s Circuit Ricardo Tormo—revealed expansive athleticism and an intense ability to assail corners. Leaned into a corner, the Panigale’s body mass seemingly dissolved with an agility that belied its four-figure displacement. With the throttle pinned on the half-mile straight, it devoured tarmac until we hit an indicated 172 mph, proving its mettle across the sometimes paradoxical tasks of cornering and straight-line acceleration. But in the end, the Panigale V4 S earned our distinction not only because of its striking performance capabilities, but also because it achieves those goals while remaining definitive of Ducati. (from $27,495).

First Ride: Ducati’s 2021 SuperSport 950 S Is as Versatile as a Shape-Shifter