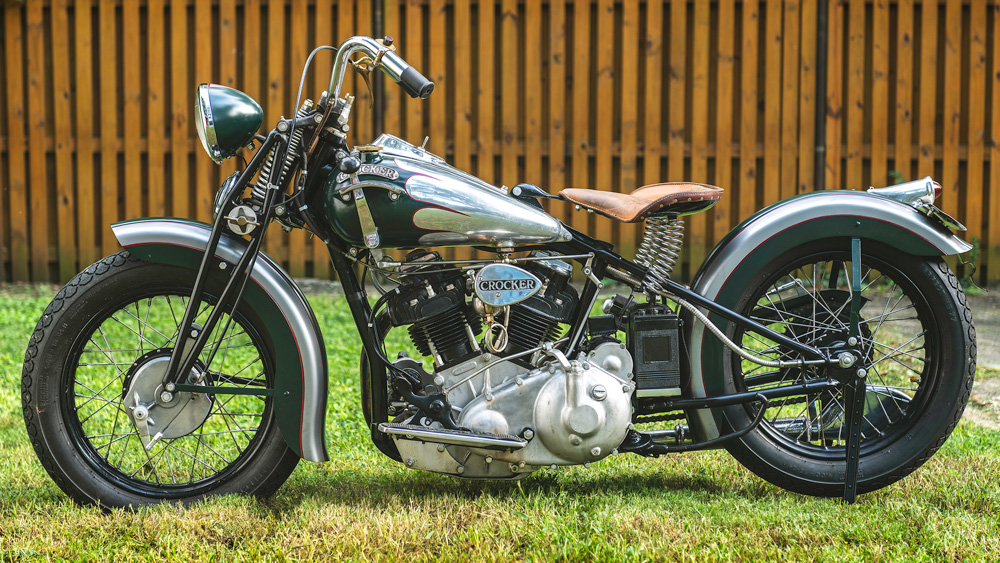 Bonhams will return to the Barber Vintage Motorsports Museum in Birmingham, Ala., on October 5 for the museum’s 15th annual vintage festival and the auction house’s second annual collector motorcycle sale. Craig Mallery, Bonhams’ motorcycle specialist, acknowledges that the museum’s atmosphere is a stark contrast to the Rio All Suite Hotel & Casino’s ballroom, where Bonhams hosts its annual Las Vegas auction each January, but he believes it’s an equally alluring destination for a major sale of collector motorcycles. “The energy that’s there for the weekend is unbelievable,” Mallery says. “The surroundings of the museum only add to the attraction of the auction.”

Of particular note, the Bonhams sale includes a handful of unrestored, matching-numbers Vincent bikes—some complete and others disassembled—from the mid-20th century. “They’re going to present some really interesting opportunities for people who may have been previously priced out of the Vincent market,” says Mallery. “The buyers—with a little sweat equity and some extra help—should have some nice gems on their hands.”

All told, the second annual Collectors’ Motorcycles auction at the Barber Museum will see 115 machines offered for sale; however, four specific bikes are expected to lead the way, commanding six-figure values when all is said and done.

Seventy-four lots into the auction, Bonhams will roll up onto the stage the first of its main attractions, a 1949 Vincent 998 cc Black Shadow Series C. In gleaming concours condition, the rare British bike (only 42 examples are registered with the Vincent Owners Club) was restored in 2016 to the model’s original Earls Court Motorcycle Show specifications. Since then, it’ has logged only 96 miles and it last exchanged hands for $147,541 through Bonhams’ Bond Street auction in London in December 2017. Conservatively, Bonhams has estimated it to sell for between $110,000 and $130,000.

This example is in concours condition.  Photo: Courtesy of Bonhams.

“Of the truly collectible motorcycle brands, the numbers being produced are so much smaller,” Mallery says when comparing classic motorcycles like this Vincent to classic automobiles. “With Vincent, every last bike was hand built.”

That motorcycles of this rarity and quality have survived is, in some ways, a stroke of good fortune, at least as far as Mallery is concerned. And that rarity is one of the motorcycle’s primary selling points. “Like anything of that vintage, as you progress through the years, that rarity factor increases because bikes don’t make it all the time,” he says with a laugh. “They get ‘retired.’”

A couple of lots after the aforementioned Black Shadow crosses the block, the event’s marquee bike, a 1940 Crocker Big Tank V-Twin will be offered for sale. Built during the final two years of Al Crocker’s commitment to motorcycles—at the crossroads of Crocker’s transition to aircraft components during World War II and his subsequent concentration on industrial manufacturing thereafter—this bike was once owned by a Crocker Motorcycles employee. Nevertheless, the motorcycle’s most influential calling card is simply the fact that it’s a 1940 Crocker Big Tank. After all, fewer than 30 examples were ever produced, each one bespoke and built by hand. “This bike stands alone,” says Mallery, “regardless of whose hands it passed through over the last 70 years.”

Seven years ago, during its Quail Lodge auction in Monterey, Calif., Bonhams sold three Crocker Big Tanks for around $300,000 apiece. Since then, the value of these bikes has skyrocketed. As way of example, earlier this year, Mecum Auctions sold a 1940 Big Twin for $550,000 and a 1939 Big Tank for $704,000. Those auction results suggest that this particular Crocker Big Tank, with an estimate ranging from $495,000 to $595,000, could outperform those projections. “Collectors over the last few years have gotten very serious about what they’re willing to spend to put one [a Crocker Big Tank] in their collection,” says Mallery.

One of the premier lots is this 1910 Flying Merkel 884 cc Twin Engine.  Photo: Courtesy of Bonhams.

“I hope people really like orange, because this bike is very orange,” Mallery says with a laugh, as he references a 1910 Flying Merkel 884 cc Twin that will cross the block. In truth, Mallery acknowledges that every Merkel twin that he’s ever seen has been orange; that was one of the brand’s distinguishing features more than a century ago.

Prospective buyers will likely notice that this particular bike’s catalog description offers little in the way of a résumé. In full disclosure, Mallery acknowledges that the motorcycle’s current owner (and consignor) acquired the bike to be an investment, so less research has been done on its individual backstory. That being said, Mallery doesn’t believe its enigmatic past will deter would-be owners from raising their paddles once the bike rolls up on stage. “It’s lovingly restored,” he says, “and a great machine. For someone who doesn’t have one in their collection, it’s going to be a great one to add.” Bonhams estimates that it could sell for as much as $150,000.

Bonhams will be presenting this 1974 Ducati 750SS.  Photo: Courtesy of Bonhams.

There are certain features about this 1974 Ducati 750SS that are distinctive. The blue-green frame is certainly one, as is the limited-edition paint scheme that pays homage to the model’s victory at the inaugural Imola 200 road race in 1972. Yet the street-legal bike is most desirable for being the sum of all of those attractive, individual components—including a round-case engine.

“The previous square-case models of the SuperSport were nice bikes,” Mallery says, “but the round case just gets it right on all fronts. Ducati has always made lovely machines, and visually they’ve always been very striking. But every now and then they get one so right that it resets the bar as to what a motorcycle can and should look like. This one did that.”

That the road bike is an extension of a racer that effectively put Ducati on the map thanks to its Imola victory over established racing marques such as Triumph and MV Agusta only adds to its appeal. With its estimate slated at $130,000 to $160,000, this sleek, historic racer is primed to perform as well as another 1974 Ducati 750SS, which Bonhams sold last year for $137,000.