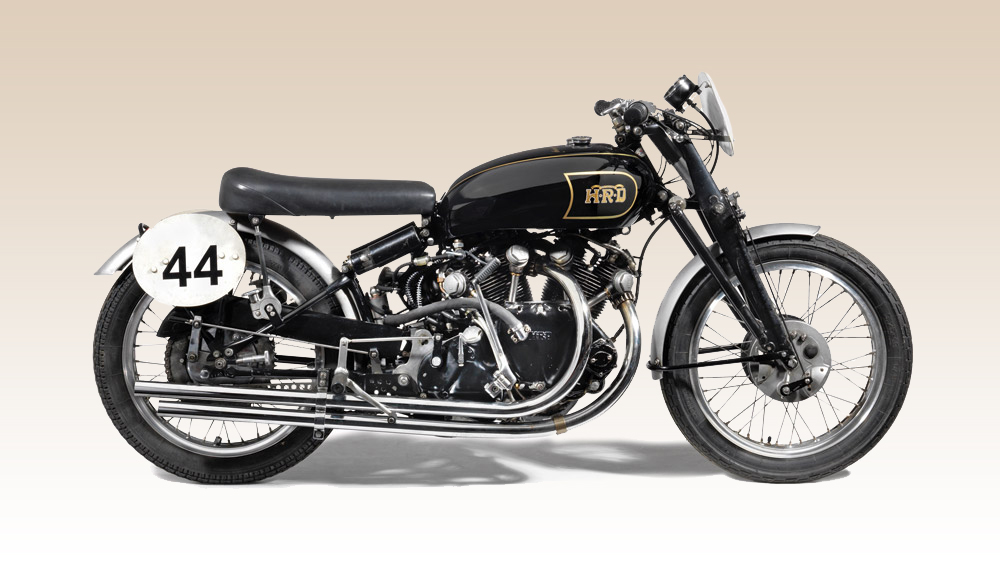 Bonhams will hold its first ever motorcycle auction at the Barber Motorsports Museum in Birmingham, Ala. on October 6—one which it’s hoped will become an annual event. Scheduled to coincide with the 14th annual Barber Vintage Festival motorcycle celebration (which runs from October 5 through 7), the 115-lot lineup is ferociously strong.

Estimated at $400,000 to $500,000, a 1949 Vincent Black Lightning earns top lot status. It’s the earliest known example with matching numbers, and the consigner owned it for 50 years. Alluring as it is, it probably won’t break the world auction record for a motorcycle, which Bonhams set in Las Vegas this past January with a 1951 Vincent Black Lightning. It commanded $929,000. That particular bike came with unbeatable extras that included a sidecar and its original packing crate, emblazoned with the Vincent logo.

“That said, it’s still a Vincent Black Lightning. It’s going to do well,” says Craig Mallery, a Bonhams motorcycle specialist. “This is the gold standard. It’s as desirable a collectible motorcycle as there is.” The 1949 Vincent Black Lightning also managed to survive 69 years and more than 30,000 miles without an accident. “Think of the history of Vincent Black Lightnings. A lot were raced, and a lot set land speed records,” says Mallery. “To get one that’s not twisted up in some sort of incident is really remarkable.”

Fighting the Vincent for top billing is the 1970 Husqvarna 400 Cross, estimated at $75,000 to $100,000, which Steve McQueen rode in the beach scene of the classic 1971 motorcycle racing documentary On Any Sunday. It’s known McQueen rode this bike in that scene because paperwork confirms it, and copies of those documents are included in the lot. The consigner tracked down a letter that filmmaker Bruce Brown sent to officials at Camp Pendleton, the Marine Corps base camp in California, which specified each bike’s make, VIN, and rider. “The reason the documents are so important is not only did McQueen own several motorcycles, he owned several Husqvarnas,” Mallery says. “To be able to say it was used in the film, you need documentation to back it up. We’re being clear it was used in the beach scene. The Husqvarna in the race scene was not this bike, as far as we know.”

Once one of Steve McQueen’s Husqvarnas.  Photo: Courtesy of Bonhams.

Also notable is a 1928 Windhoff 746cc Four, estimated at $100,000 to $150,000. It’s unclear how many were made and how many survive, but it was produced for only a few years in the late 1920s. It doesn’t often appear at auction, and Mallery suspects that most examples are in institutions. Prior to the Barber auction, a Windhoff has come up for sale in August 2012 and April 2008, and both times, it was this bike. “The thing that’s so cool about the Windhoff is that the engine IS the chassis,” Mallery says, laughing. “It is a massive casting, basically the entirety of the frame itself. You have to see it in person to appreciate how pretty it is. You’re kind of gobsmacked by it.”