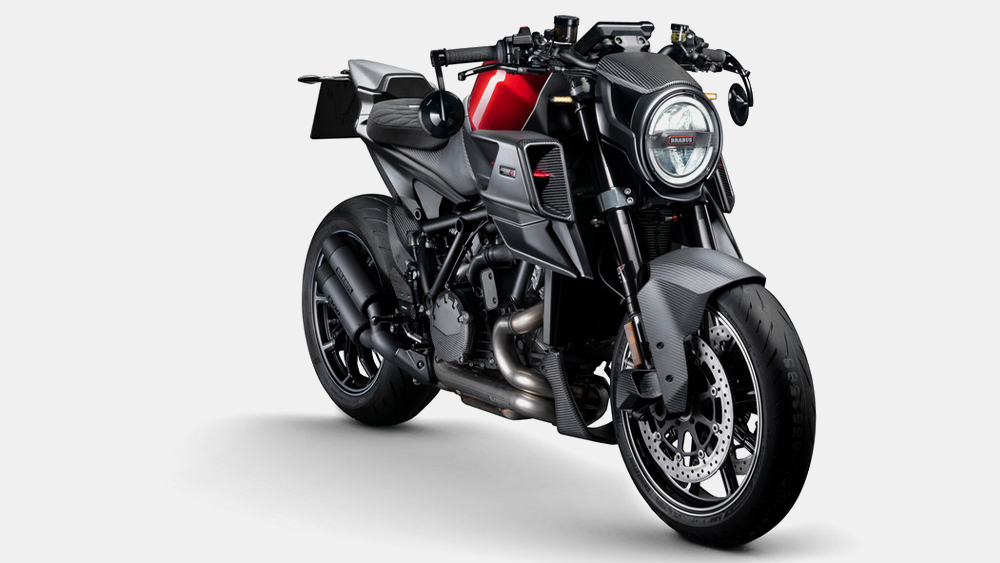 Brabus is trading in four wheels for two. The German tuner known for its flashy Mercedes-Benz SUV mods is partnering with KTM to deliver its first motorcycle, the Brabus 1300 R. The collaboration is heavily influenced by the Austrian marque’s 1290 Super Duke R EVO, which is known for its monstrous torque. For fans of KTM’s offering, the 1300 R shouldn’t disappoint—it’s mostly the same bike.

Exercising uncharacteristic restraint, Brabus decided to leave the powertrain alone on its first modified motorcycle. We can understand why, because the 1290 Super Duke R EVO already delivers a knockout punch. The 1300 R comes powered with the same 1,301 cc V-Twin engine found in KTM’s Super Duke, producing 180 hp and 140 Nm of torque, which can blast riders from zero to 62 mph in 3.2 seconds. The tuner also matched other specs from its muse: The 1300 R features a similar frame, fuel tank and a semi-active suspension system that comes with six different damping modes—Comfort, Street, Sport, Track, Advanced and Auto—which can be adjusted via a 5-inch TFT display.

Of course, Brabus did see some room for improvement. The tuner modified the bike’s signature exhaust system—this time using a unique slip-on version with a double-pipe design. There are also elements of the 1300 R that feature Brabus’s signature exterior look, like the lightweight Monoblock Z 9-spoke forged wheels, high-end carbon body elements and round retro-style LED headlight and accompanying rear lights. The 1290 Super Duke R EVO also pulls inspiration from Brabus’s interiors, specifically the seats, which come with a custom heated seat that’s available in red or black for keeping you warm on those cooler-weather rides.

For those looking to get their hands on the 1300 R, the hand-crafted bike will be available in two color schemes: Magma Red and Signature Black. Each color is limited to just 77 models to celebrate the year of Brabus got its start, so you better act fast. Pre-orders for the bike started on Monday on KTM’s website at roughly $46,800. That’s more than double the cost of a the standard KTM, but hey, the Brabus touch has never come cheap.

Check out more photos of the bike below:

Brabus outfitted the 1300 R with a new exhaust.  KTM