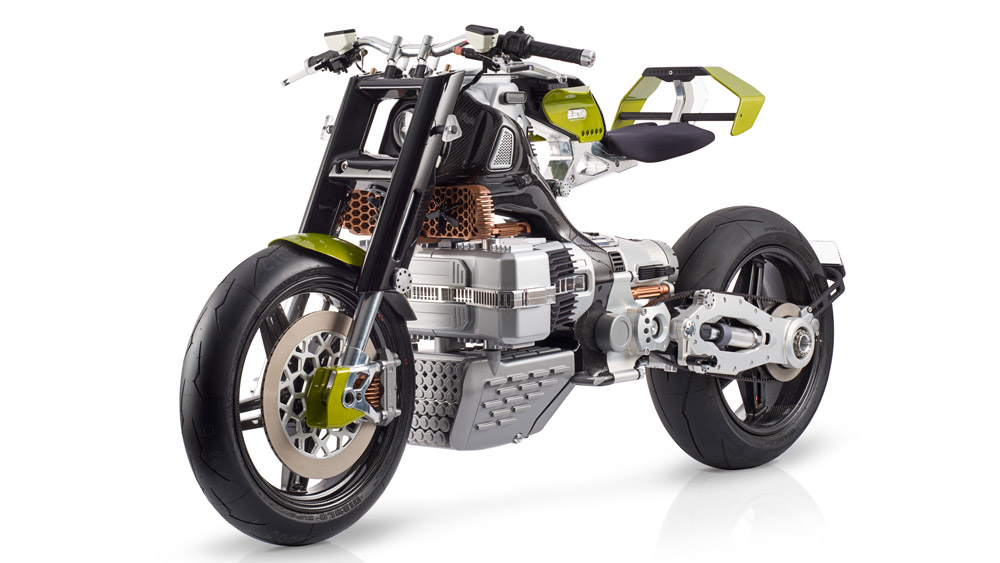 Based in South Africa, carbon-fiber experts Blackstone Tek (BST) and world-renowned motorcycle designer Pierre Terblanche have joined forces to create an electric motorcycle unlike any other—the BST-HyperTEK. Unveiled to the public at the EICMA Show in Milan last November, the carbon-fiber monocoque–framed BST-HyperTEK is the first motorcycle created by BST—a company more known for creating some of the world’s finest carbon-fiber wheels. And Terblanche is recognized for his renowned work with the Ducati Supermono, Ducati Sport Classic and various Confederate Motorcycle designs, among others.

The bike is powered by a DHX Hawk electric motor that’s good for roughly 107 hp, 88 ft lbs of instant torque. Weighing a claimed 450 pounds, the HyperTEK is the first of what BST plans to be a four-bike lineup, which will also include a Hypermotard, a cafe racer and one more model that “will be a bit more innovative,” according to Terblanche.

“I believe bikes have become much more sophisticated and reliable but, fundamentally, have remained the same,” says Terblanche. “Most current manufacturers design bikes according to their heritage and marketing requirements. For example, narrow angle V-twins made a lot of sense in 1910 but not that much now—except to the client who is buying into a lifestyle. This is the same for boxers and L-shape V-twins. Electric motorcycles are interesting in as far as there currently is no heritage to have to follow. It’s all new.”

Terblanche’s blank canvas saw him look to great designs of the past, but with a firm eye on the future when crafting the HyperTEK.  “The idea for the project was to follow the same design procedure as used on a Norton Manx or an AJS Porcupine,” he says, highlighting two of the great British designs of the 1950s. “The technical parts like the fork, frame, motor, battery pack, drive-cases and swingarm were the key design elements of the bike as it was going to have as little bodywork as possible.”

The HyperTEK is somewhat of a shapeshifter. The side panels, where a conventional petrol tank would normally sit, can be adjusted for width and angle, and the seat can be adjusted up to 1.7 inches. The rider will utilize a Japanese-made Cross X1 helmet that features head-up display, although Terblanche mentions that there will be a kit for those riders wishing to keep their Arai or Shoei helmets in use.

Terblanche also addressed one of the main issues affecting the electronic motorcycle space, that of sound. Again, he looked to the past, but his answer may surprise you.

“My feeling is the absence of sound makes the bikes less appealing,” he says. “Seeing that all EV vehicles have to have sound [per legislation], it also made sense to add a sound generator to the bike. The HyperTEK bike at the EICMA exhibition had a V1 Rocket jet sound installed and it sounds amazing. A clutch was added to help with burnouts, wheelies and revving it at your local pub. All fun stuff.”

Expect the BST-HyperTEK to cost about $80,000, although final price is yet to be determined, but you will be getting a truly unique motorcycle penned by one of the great designers of our time. “This is the best work I have ever done,” Terblanche admits. Big words, considering this man’s track record.