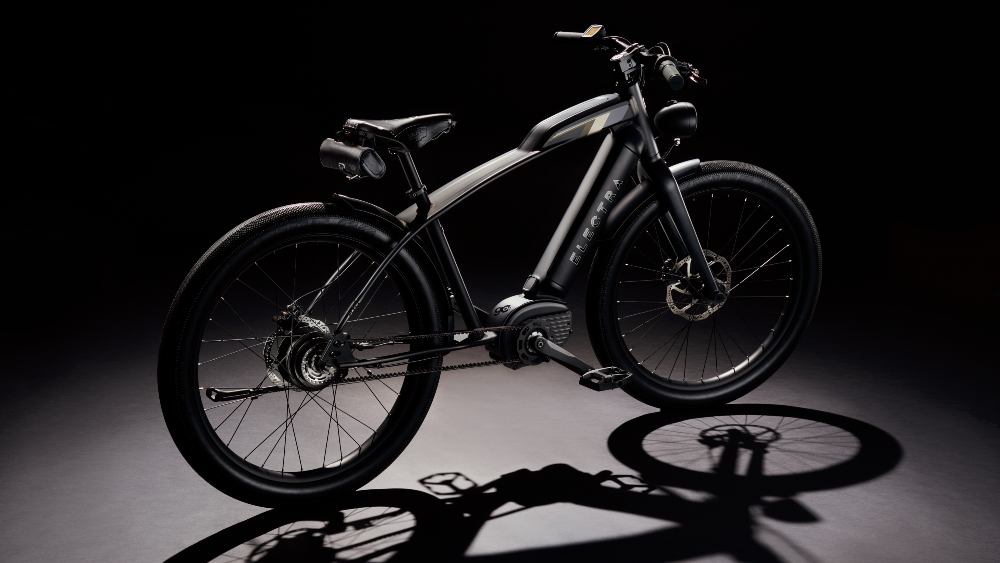 There’s no reason why a bike can’t pack some added oomph.

Electra Bicycle Company’s new Café Moto Go! is an electric bike that’ll allow riders to zip around town “like a bat out of hell,” reaching blistering assisted speeds of up to 28 mph. The limited-edition two-wheeler is the Southern California brand’s latest attempt at wedding classic style with the technology of today, while pushing the e-bike forward.

Inspired by the look of café racer motorcycles of the ‘60s and ‘70s—think a Honda CB750— the highly stylized single-speed is one of the most eye-catching e-bikes currently on the market. The sleek, almost all-black bike sports a subtle beige and olive racing stripe, a bright Spanning Custom front bullet light, and features a Brooks premium leather saddle, tool bag, Cambium grips and customized key chain.

But as well-designed as it may be, the Café Moto Go! isn’t just for looks. The bike’s impressive speed specs come courtesy of a Bosch Performance Speed 350W engine, a nearly maintenance-free Gates CDX Centertrack carbon belt drive and Enviolo Trekking 380 percent continuously variable rear hub, all of which are powered by a Powertube 500wh battery and 4amp charger. There are also Cramp Brothers Stamp 2 pedals and Hayes Prime Sport front and rear hydraulic disc brakes to ensure riders are able to come to a safe and complete stop.

Thanks to these components, the Café Moto Go! is easily Electra’s fasted e-bike yet. None of the company’s previous bikes has ever topped 20 mph, which might be why this speedster goes for $4,499, a marked increase over its previous electric offerings.

Founded in 1993, the Trek-owned Electra is best known for its traditional cruiser bicycles, like the Townie. But the company is well aware of the public’s growing interest in e-bikes and has invested in a growing roster of them in recent years, including the Townie Go! ($2,599), Townie Commute Go! ($2,699) and Loft Go! ($2,799).