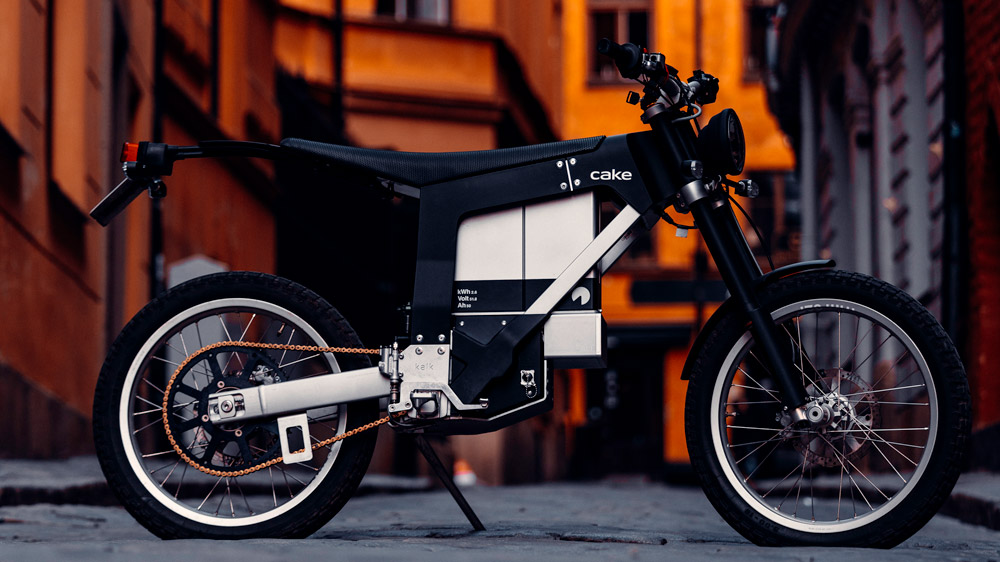 The new bike utilizes the same 10kW motor, 2.6 kWh battery, 6061 aluminum chassis and swingarm as the Kalk OR, Kalk&, and Kalk INK. Tipping the scales at a lithe 169 pounds, it can reach a top speed of 56 mph—perfect for backcountry riders looking to explore places many other machines simply won’t be able to access.

Out in the woods, the range could be as much as 53 miles.  Photo: Courtesy of Cake.

According to Cake, the range of the INK SL extends to around three hours if you’re out in the woods, where partial throttle is regularly applied. This should get you around 53 miles of range. Out on the streets, however, that number drops significantly. You can expect to see just 22 miles of range, while riding at about 45 mph. So, an epic explorer, this is not.

But, it’s not meant to be. This is a machine that’s all about zero-emissions fun—you’ll need to look elsewhere if distance is your game.

Expect a charge to cover up to 22 miles when the INK SL is used on city streets.  Photo: Courtesy of Cake.

The Kalk INK SL offers three riding modes—Explore for city riding, Excite for enduro off-roading and Excel for maximum torque and speed (but drastically reduced range). Compared to the Kalk INK, the SL runs inverted motocross suspension with the rear monoshock acting directly off the swingarm rather than employing a linkage, which Cake says adds to the INK SL’s simplicity of maintenance.

The charging time from flat is quoted at 2.5 hours from a standard wall plug, a handy thing as you don’t need to go searching for a Level 2 or Level 3 charging outlet like most electric cars and motorcycles.

Cake’s been making waves in the electric mobility space for the past few years and has recently won the 2020 Red Dot Award for Design with the Ösa utility vehicle—it’s second such accolade. The INK SL adds another notch on the Cake belt in an arena that the Swedes are rapidly taking over. and will command a $10,500 MSRP, up $1,000 over the Kalk INK. Orders are taken directly from the buyer, with bikes shipped from Sweden to Cake’s USA headquarters in Salt Lake City, Utah.