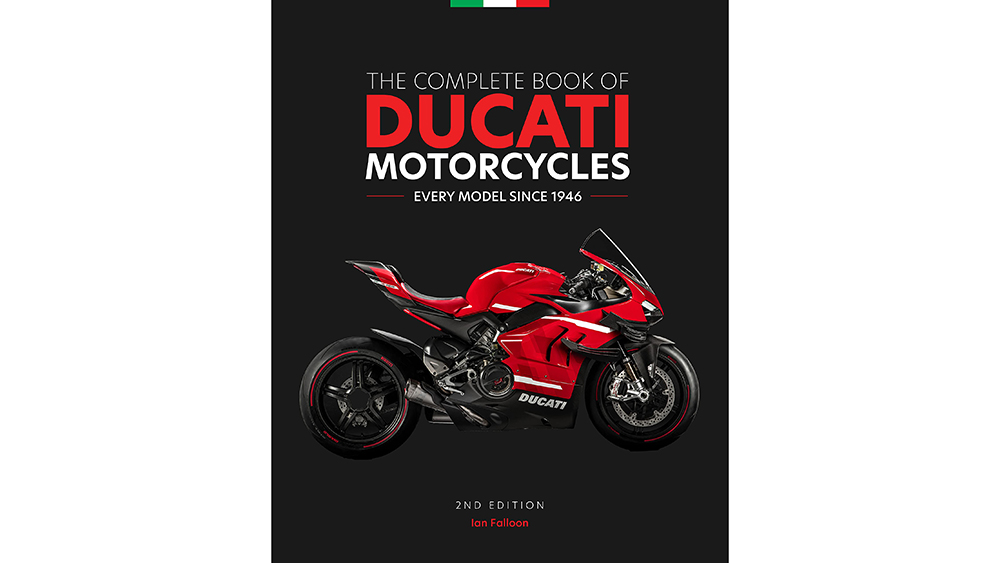 There’s no question that Ducati is one of the most prolific motorcycle manufacturers of the past century, but now we have further proof.

Ian Falloon has just released an updated edition of The Complete Book of Ducati Motorcycles to showcase the Italian nameplate’s entire output up to 2022. The hefty hardcover details the humble beginnings of the Bologna-based marque, which started out selling basic motorized bikes in post-war Italy before becoming the purveyor of high-performance sportbikes that it is today.

Presented chronologically and in encyclopedic form, the second edition features every single model in Ducati’s storied history, from 1946 through to this year. Brimming with gorgeous photography and insights from Ducati expert Falloon, the 280-page tome allows readers to fully appreciate the craftsmanship, power and beauty of each ride.

The book showcases every Ducati model since 1946.  Amazon

The book kicks off with the iconic single-cylinder bikes of the ‘50s and ‘60s, before moving on to two-wheelers like the 750 racer that won the Imola 200 in ‘72 to go down in Ducati history. It also covers the groundbreaking 750 Supersport Desmo that was launched at the Milan Motor Show in November 1973. This model, which marked the debut of the Desmodromic valve operation system on a V-twin engine, could churn out 72 horsepower at 9,500 rpm and thus ushered in a new era of performance.

Jump ahead to find the innovative 916 and Monster that were both launched in the ‘90s. According to Falloon, the 916 influenced motorcycle design throughout the next decade and beyond, while the Monster established a new niche that would spawn a cult of customization.

Naturally, the tome has a section dedicated to the Panigale and Scrambler.  Amazon

Of course, today’s Ducatis are well represented, too. You can expect a section on the uber-successful Scrambler and the formidable Panigale superbike. The book closes with a part dedicated to the new 108 hp all-terrain model known as the DesertX.

A must-have for any motorcycle enthusiast, The Complete Book of Ducati, Second Edition, will set you back $60. Not bad for a 2-D collection of Ducatis.