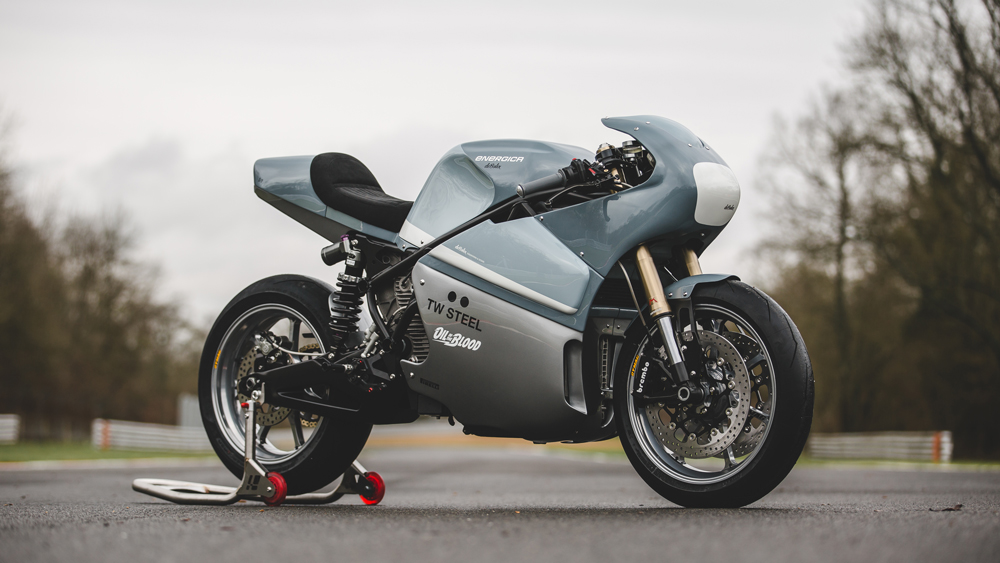 Custom motorcycles traditionally comprise secondhand bikes which have been given a new lease on life. Rarely do they start as brand new canvases, and even rarer is that canvas powered by electricity. However, that’s exactly what you get with UK-based deBolex Engineering’s stunning Energica Eva—an electric machine created in collaboration with luxury Dutch watch company TW Steel and the creators of the custom motorcycle movie, Oil in the Blood.

“Energica produce a high production, high quality electric bike, so that kind of suits what we do with our bikes,” says deBolex Engineering’s 30-year-old owner, Calum Pryce-Tidd. “Using it as a base was like working with a Ducati or an MV Agusta. It’s an Italian sport bike.”

Shaking new custom ground with the eclectic Eva was one of the most exciting factors in the design, according to Pryce-Tidd. “We really wanted to design a bike that bridged a gap between combustion engine styling and electric styling. We didn’t want our bike to look too futuristic. We really wanted to work some of those retro styling cues into the build. Obviously, this huge battery that’s in there, one that is tricky to work around and quite bulky. We spent a lot of time designing certain features to slim the aluminum fairing and make it look like a sleek, lightweight bike. After we laid that first bit of paint on and we put it together, I was over the moon with the result.”

“The aluminum work was pretty in-depth,” says Pryce-Tidd. “That was the bulk of our time on the project. We strip back to the core of the motorcycle, improve the chassis and all the elements that we can and then rebuild it back up with our skinny aluminum bodywork. That’s something I’ve taken from looking at classic cars, which I’m really into. We also spent a lot of time designing our seat pan to get as much comfort out of the thin base as we can.”

The bike charges ahead with 145 hp and 148 ft lbs of torque.  Photo: Courtesy of deBolex Engineering.

After doing the rounds of various custom bike shows around the world, including The Handbuilt Show in Austin, Tex., for the recent U.S. MotoGP running, the deBolex Engineering Energica Eva now takes pride of place in the TW Steel offices in Holland.