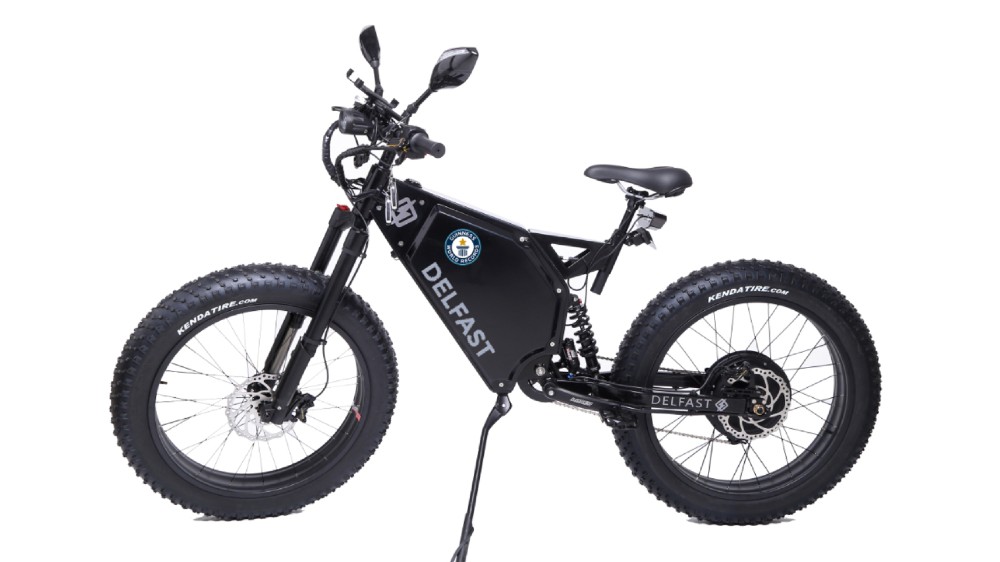 This year has seen a rash of e-bikes that, well, don’t look like e-bikes: slick, classically styled road bikes with discrete batteries and motors that look like any other pedal-powered bicycle. But sometimes it doesn’t matter if an electric bike’s appearance betrays its motorized nature, as long as it gets the job done—like the new Delfast Offroad.

Looking more like a dirt bike than a mountain bike, the England-based company’s latest is for riders who aren’t scared off by the most treacherous of trails. With its fat tires and a beastly electric motor set-up, the aptly named Offroad is a bike that aims to tackle whatever terrain you encounter, no matter how inhospitable.

Indeed, the Offroad’s specs suggest a bike that at least rugged enough to live up to its name. Built on an Endro frame, the bike boasts fat, Kenda Juggernaut tires, a telescoping front fork and rear monoshock and Tektro Dorado four-piston hydraulic disc brakes, all of which promise a smooth ride. The tech touches include an LED light kit, Bluetooth, GPS and a full-color display with a USB port and IPX5 weather protection coating.

The electric bike will also get you where you where you need to go quickly. The Offroad is powered by a 5 kW peak-rated rear-hub motor and a 72V battery that will allow it to reach an impressive top speed of 50 mph. If that weren’t enough, its beefy battery also gives it a range of 110 miles per charge. With performance like that, the Offroad may be almost as much of light motorcycle as it is a mountain bike.

The company sees the bike appealing to a broad range of adventure riders. “This electric beast represents a family of fatbikes much-loved by keen travelers who are not afraid of any weather or terrain challenges,” the company recently told Elektrek. “With its fat and low-pressure tires, hydraulic seat and a powerful electric motor, Delfast Offroad is an excellent choice for fishermen, hunters, extreme photographers, wilderness enthusiasts, and simply uncompromising offroad lovers.”

Available through the company’s website, the Delfast Offroad starts at $6,999. Options like a red frame (and extra $199), as opposed to the standard black or white, and a moto saddle ($149), can push the price higher.