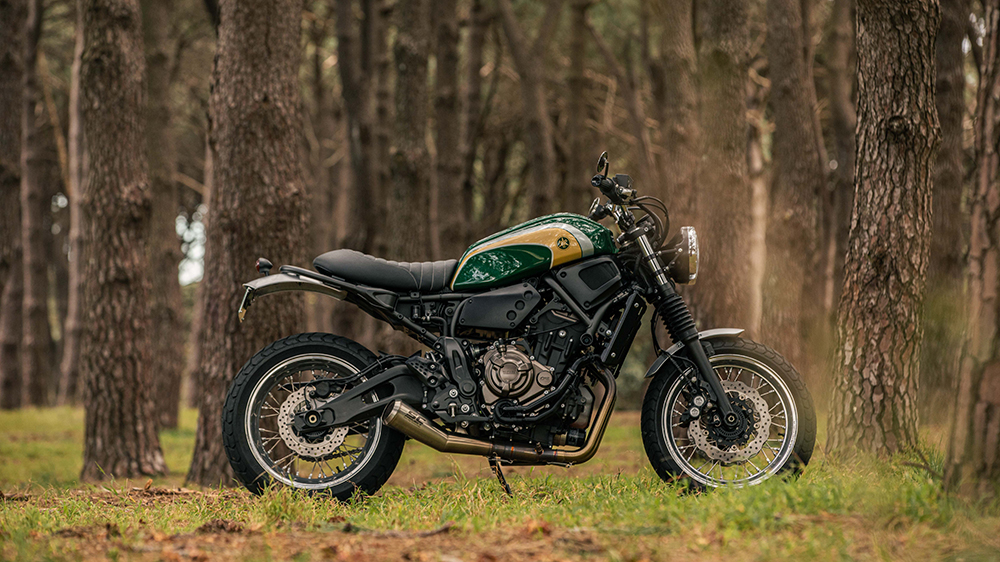 The Yamaha XSR700 is easily one of the most attractive retro-style motorcycles currently on the market, but Deus Ex Machina still found a way to improve its look.

The Australia-based custom shop has just unveiled “The Forager,” its take on Yamaha’s stylish two-wheeler. Deus Ex Machina didn’t just give the bike a makeover, though. It also outfitted it with new hardware, resulting in a bike that feels truly unique.

The XSR700 made its debut six years ago. The naked, scrambler-style motorcycle was designed by noted Japanese customizer Shinja Kimura, who was inspired by some of the bike maker’s classic models from the 1970s, like the XS650, according to HiConsumption. The two-wheeler may look like a blast from the past, but its hardware is thoroughly modern and modular, making it well-suited for customization.

The Forager is the handiwork of Deus Ex Machina’s Jeremy Tagand. Originally, he was tasked by the bike’s owner, Ty, with applying a Formula 1-inspired green and gold livery and swapping out the lighting equipment. He didn’t stop there, though. In addition to the new paint job and 7-inch LED headlamp and micro-LED indicators, the bike has been equipped with an SW-Motech alloy front fender, JVB Moto fork gaiters and a Yamaha-sourced single-seat saddle covered with ribbed leather. The cockpit was also fully reworked, and now has a Purpose Built Moto switch gear, Motogadet speedometer and Biltwell handlebars wrapped in Motogadet grips.

This custom job is still powered by a 42-cubic-inch parallel-twin four-stroke engine that can generate 74 hp and 50 ft lbs of torque, but there’s also a stainless-steel SC-Project Conic 70’s exhaust system and a new radiator guard. Rounding things out are a set of Alpina Raggi wheels wrapped in Pirelli MT60RS tires.

Unfortunately, The Forager is a one-off, so you can’t buy an example of your own. If you like what you see, you’re in luck, though. Deus Ex Machina is selling several of the parts used for the project through its website, which you can use to build a custom XSR700 of your very own.

Click here to see all of the photos of Deus Ex Machina’s “The Forager” Yamaha XSR700.