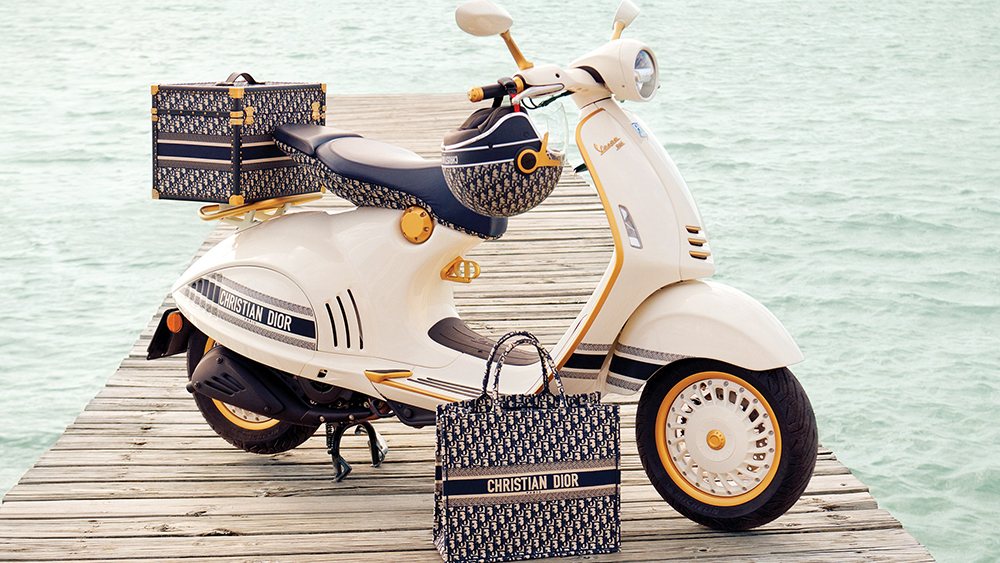 In 1946, the design world was changed forever. Christian Dior launched his eponymous couture house and Piaggio released the very first Vespa. Now, the storied brands have joined forces to shape the style zeitgeist yet again with a Diorified take on the iconic scooter.

The limited-edition two-wheeler was penned by the creative director of Dior women’s collections Maria Grazia Chiuri. The Italian designer wanted to deliver a haute riff on the Vespa 946, which was first presented by Piaggo in 2012. The 56-year-old also wanted to hark back to the scooter’s Roman roots and honor its impact on pop culture, such as its cameo alongside Gregory Peck and Audrey Hepburn in the 1953 classic Roman Holiday.

“I have so many happy memories starring a Vespa,” Chiuri said in a press release. “It’s a symbol of Italian-ness that is intricately linked to my personal history, and it’s now part of my professional life at Dior.”

As expected, the ride retains its elegant, streamlined curves and a practical step-through frame that is quintessentially Vespa, but has a good dose of Dior. The house’s Oblique motif, which was designed by Marc Bohan in 1967, adorns both the saddle and the top case that sits on the luggage rack. It’s also featured on the matching helmet which is part of the optional accessories line. Each scooter is made in Italy and adheres to the exacting standards of the couture atelier.

The dynamic duo says the creation exudes the “spirit of freedom, movement and expression,” that underpins both brands. It also highlights the pair’s commitment to fastidious craftsmanship and pioneering design.

The 2021 Vespa 946 Christian Dior will roll out in spring next year. It will be available in Dior boutiques around the world and a selection of the Piaggio Group’s Motoplex stores. No cost has been announced yet, but can you really put a price on getting a chance to emulate Gregory Peck?