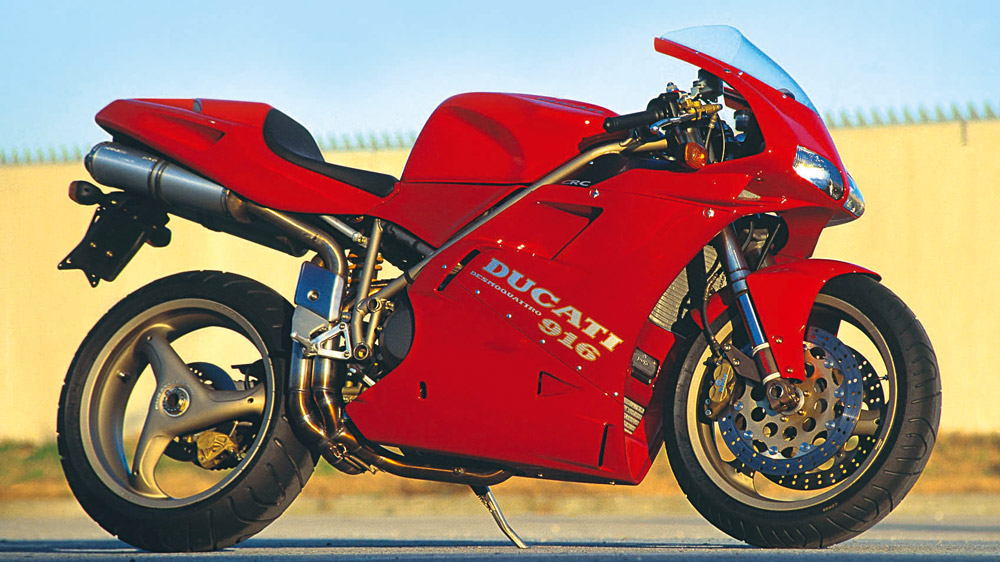 This year marks a quarter century since the 1994 Ducati 916 arrived on the world scene and promptly moved the superbike goalposts. More than any other motorcycle, the 916 is the one that created the modern powerhouse that is Ducati Motor Holding. It is by no means an understatement to say that the 916 is the most important motorcycle Ducati has ever built.

Emanating from the pen of the late Massimo Tamburini, the “Michelangelo of Motorcycles,” and powered by Massimo Bordi’s four-valve desmodromic V-twin (measuring 94 x 66 mm for 916 cc), the 916 became an instant classic and the face of 1990s superbike culture.

Tamburini deliberately designed the steel-trellis-framed 916—loved for its swooping, curving aesthetic—to have the form of a lady when viewed from above. Svelte and light in the tradition of Italian sports motorcycles, this was a machine unlike anything you could buy at the time from either Europe or Japan, the latter of which favored boxy, flat edges for their superbikes including the Yamaha YZF750 and Honda RC45.

Under the direction of then Ducati owners, brothers Claudio and Gianfranco Castiglioni, this was the first Ducati to be designed as a complete project. Tamburini and Bordi worked together from the outset to create a machine that flowed elegantly from mechanical brilliance to eye-popping beauty.

Ducati and Tamburini skirted the legal mineshaft of creating the 916’s iconic single-sided swingarm, the patent of which was owned by Honda, and the immediately identifiable under-seat exhausts—the inspiration for which Tamburini freely admitted he took from Honda’s NR750.

The Italians still harbored ambitions to win the Suzuka 8 Hours and Bol d’Or 24 Hour endurance races, and the single-sided swingarm helped facilitate fast wheel changes. Ducati never achieved this long-held company ambition of endurance-race glory, but when it came to the World Superbike Championship, the 916 was a revelation.

The 916 takes its rightful place in the Ducati Museum.  Photo: Courtesy of Ducati.

The machine took five WorldSBK titles between 1994 and 1999—four to Briton Carl Fogarty and one to Australian Troy Corser. In 2001, the machine, now with 996 cc, took one more WorldSBK title with Australian Troy Bayliss before it was retired from service after the 2002 season. It also racked up countless race and title wins in the United States, Europe, Asia, and Australia.

Like a fine wine, the 916 is one of those rare creations that gets better with age. The Tamburini-and-Bordi breakthrough crossed cultural bounds, becoming more than just another red Ducati motorcycle. It is a timeless symbol of mechanical art, and one that looks and rides as good today as it did 25 years ago.