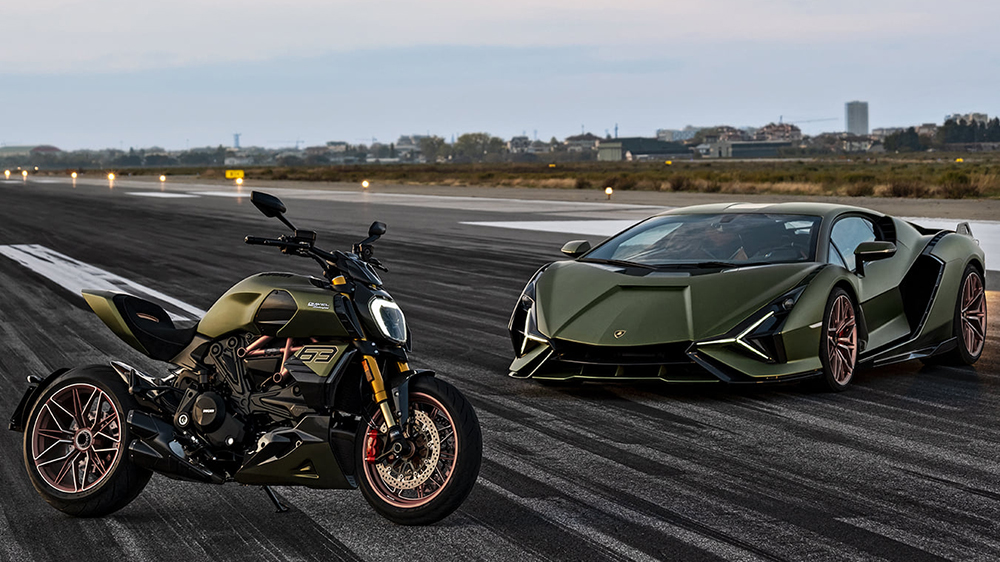 For speed freaks, few names inspire as much excitement as Lamborghini and Ducati. So, it seems only natural that the two Italian brands would join forces some day. Late last week, that dream became a reality, as the two brands teamed up for their first collaboration motorcycle, the Diavel 1260 Lamborghini.

The bike, which is , directly inspired by last year’s Siàn FKP 37 hybrid hypercar, doesn’t look all that different than the sporty Diavel 1260 S that made its debut last year. Much of the body—including central tank, radiator covers and air intakes—is now made from carbon fiber, according to a press release. This, along with its Verde Gea and Electrum Gold paint scheme and exposed carbon-fiber accents, ensure the bike is a perfect match for its much larger hypercar cousin.

Those aren’t the only Lamborghini-inspired design touches on the two-wheeler. The bike also has a hexagon-shaped exhaust, a large “Y” detail on the seat and rides on forged wheels almost identical those on the Siàn. Its 1262 cc Ducati Testastretta DVT motor can’t compete with the hypercar’s hybrid powertrain, but it’s still got plenty of oomph. Ducati says the bike will make 157 hp, 95 lbs ft of torque and rev at 7,500 rpm. That’s plenty of power for a motorcycle, especially when it weighs a relatively light 485 pounds thanks to all the carbon-fiber bodywork.

“In creating a Diavel inspired by the Siàn, we are celebrating the values we share with Lamborghini: We are Italian, we are sporty, and design is a distinctive element for our creations,” Ducati’s design director Andrea Ferraresi said in a statement. “The Diavel 1260 Lamborghini was designed using the same stylistic language that distinguishes the super sports car, so we have redesigned the elements that most characterize the Diavel.”