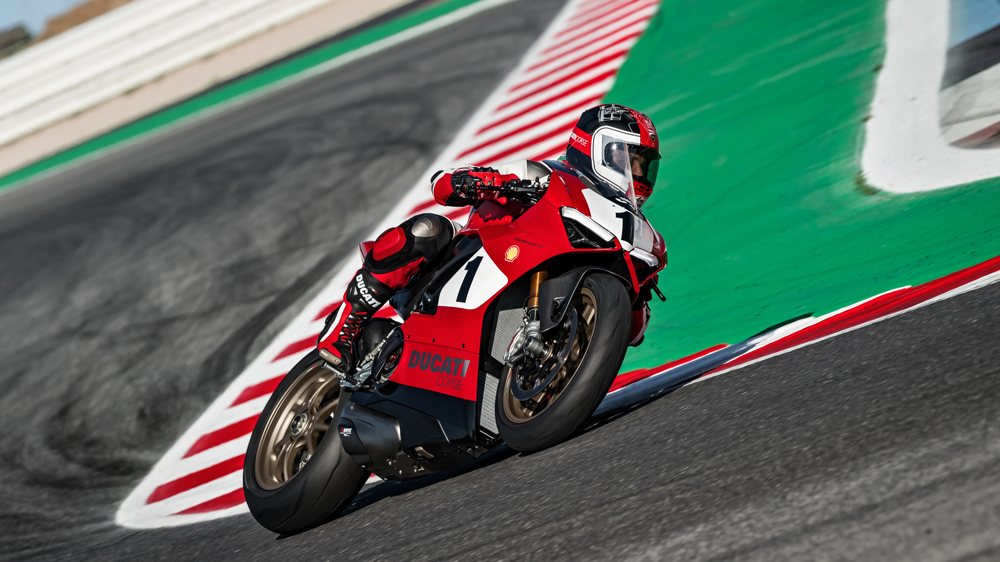 The current master of the Italian superbike game, Ducati’s Panigale V4 S would not exist today were it not for the Ducati 916. This year marks a quarter century since the stunning debut of the latter, and Ducati has decided to honor the legend in the only way it knows how. Welcome the Ducati Panigale V4 25° Anniversario 916, a rolling tribute to the greatest superbike of all time.

Ducati unveiled this most important of Panigale’s at a special ceremony held at the Pebble Beach Golf Club in Monterey, Calif., earlier this month—even flying in the man who is synonymous with the success of the original 916—four-time World Superbike Champion, Carl Fogarty. The Ducati Panigale V4 25° Anniversario 916 is limited to 500 examples and is more than just a Panigale V4 S in disguise. To go with the number 1 paint scheme (that’s a replica of Fogarty’s last championship winner of 1999), you get the same 1,103 cc V4 from the V4 S, but the chassis has been revised with a stiffer front frame taken straight from the race-spec Ducati V4 R.

The famous rattle that is a Ducati dry clutch returns, as it replaces the wet unit found on the base V4 S. The electronics have also been upgraded in the Ducati Quick Shift EVO 2 for aggressive gear shifts, and the Ducati Traction Control EVO 2 algorithm, both from the V4 R.

Robb Report was given the key to the then only example of the bike in the United States at WeatherTec Raceway Laguna Seca, taking in seven short but memorable laps on a motorcycle that is as much art as machine. Having ridden the base model V4 S at the world launch in Spain in 2018, we felt immediately familiar with this bike in Laguna Seca’s notorious twists and turns. However, the Anniversario turns with more agility thanks to the lighter wheels, allowing the rider to pick and choose lines (or change them) on a whim. Matched to the utterly raucous power from 1,103cc V4 and the Akrapovic exhaust bellowing away under the Öhlins shock absorber, the ride is absolutely all consuming.

Ducati’s latest electronics in the Ducati Quick Shift EVO 2 and Ducati Traction Control EVO 2 keep everything in line as the scenery gets hurled at you ever faster, yet the Anniversario is also a pleasure to ride at slower paces. This is a machine you can still commute to the store on to pick up your Sunday bread. But it’s best experienced with the throttle pinned—just like the original Ducati 916.

Each example’s number is engraved on the top triple-clamp.  Photo: Courtesy of Ducati Motor Holding S.p.A.

Ducati has pulled off a delightful doff of the cap to the motorcycle that saved the company a quarter of a century ago. The question now is, do you ride it full throttle like a superbike, or leave it in your living room as a piece of modern mechanical sculpture—because it’s extremely capable at both tasks.