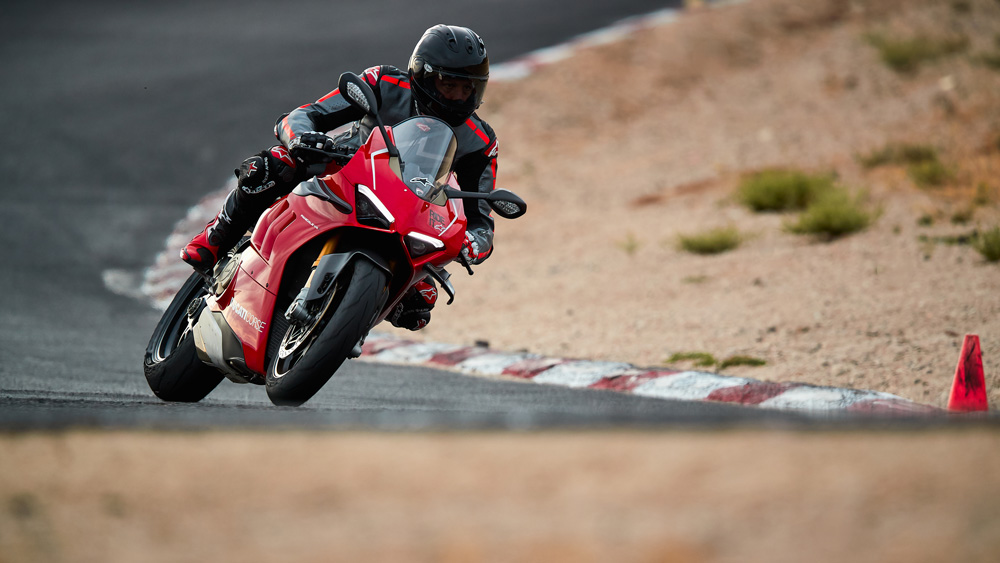 Superbike competition has always been Ducati’s happy place. It’s the arena where the brand made its modern name when the 851 was released in the late 1980s—a motorcycle that proved the genesis of the 888, 916, 998, 999, and 1098 sport bikes that came after.

But those machines, impressive as they were for their times, are small fry compared to the heavyweight powerhouse that is the Ducati Panigale V4 R. This is the fastest and most powerful production Ducati ever created.

The Panigale V4 R packs an eye-watering 220 hp in standard trim, putting it ahead of even MotoGP machines from a decade ago. And it revs higher than any Ducati before it, with a redline reached at an ear-splitting 16,500 rpm. At Willow Springs, you run out of racetrack on the V4 R far sooner than the motor does horsepower. To call this motorcycle fast would be a serious understatement—the Panigale V4 R makes many other 1000 cc, four-cylinder superbikes feel anemic in comparison.

It’s also violent. Riding the V4 R around the incredibly poor track surface of Willow Springs is a high-wire act, balancing the forceful input required from the rider to make the ultra-stiff chassis work as intended, while at the same time not overcooking it and throwing $39,995 worth of Italian exotica at the numerous cacti that dot the track’s perimeter.

The Panigale is graced with the best Brembo Stylema brakes and Öhlins suspension of any superbike on sale to the public. The 43 mm NIX gas-pressurized fork and TTX36 rear shock absorber impart a sensitive but ultra-direct feel that lets the rider know exactly what’s going on underneath them.

The Panigale turns with stupendous speed, hunting apexes like prey. But it’s a delicate balance at Willow, as the suspension bucks and kicks the chassis in protest due to the track surface, while you do your level best just to hang on and guide the red-winged missile.

Helping your cause is the Panigale’s suite of electronic rider aids, with everything from traction, slide and wheelie control, to an up-and-down quick-shifter for the gearbox, all designed to let you tailor the ride to your liking as much as possible. Want a fire-breathing superbike with no rider aids and just your right wrist and wits to save you? The Panigale will let you do just that if you turn the electronic aids down. But we suggest you don’t go that far, as the rider aids (and they are indeed aids that help you go faster, more safely), are absolutely some of the best available to the public this side of a World Superbike Championship race paddock.

The electronic rider aids include everything from traction, slide and wheelie control, to an up-and-down quick-shifter for the gearbox.  Photo: Courtesy of Ducati.

My final lap on this year’s version of the Ducati Panigale V4 R had me thinking about how nobody needs this much performance. Certainly not for the road, and barely for the racetrack, at which point you need to be pro-level to get close to its performance limits. Having 220 hp is something no one needs in a motorcycle with headlights and a license plate.

Needs and wants, however, are two very different things. The fact that this machine has more performance than supercars 10 times its price makes me want it even more.

The Ducati Panigale V4 R is a landmark motorcycle, and I’m beginning to think I may need one in my life, after all.