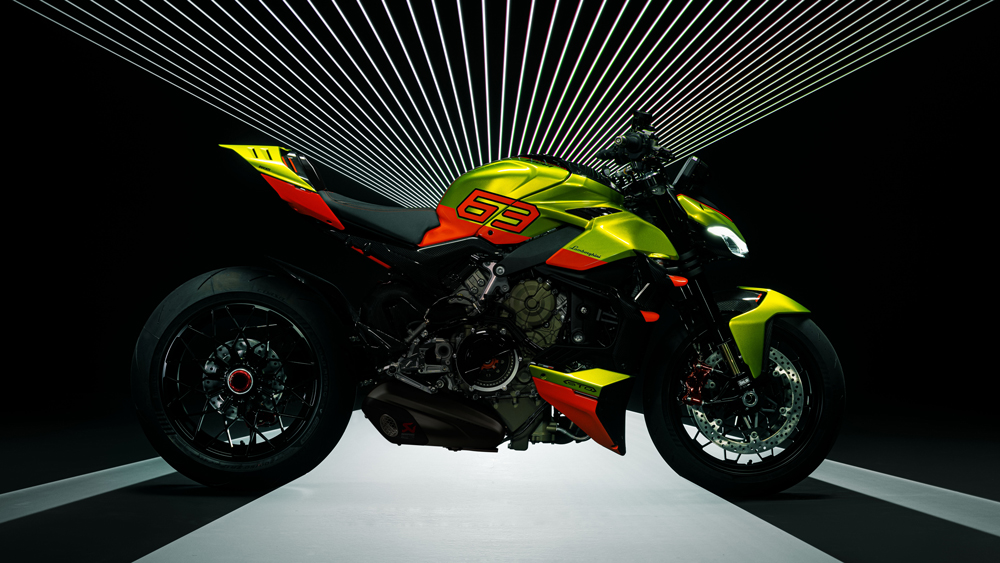 Ducati and Lamborghini have joined forces for the second time in their collective history to create a stunning naked superbike in the $68,000 Ducati Streetfighter V4 Lamborghini. Hot on the heels of the Diavel 1260 Lamborghini released in 2021, a bike that paid homage to the Lamborghini Siàn, the Streetfighter channels the design forces at the 631 hp Lamborghini Huracán STO. And it’s more than just a doff of the cap between neighbors that makes this motorcycle what it is.

Although the new model comprises 630 units for general distribution worldwide, an extra 63 custom examples, priced at $83,000, will be reserved specifically for Lamborghini owners through the Speciale Clienti initiative. Those 63 customers will have the option of tailoring their Streetfighter V4 Lamborghini to the same color as their supercar, including the bodywork and rims, the latter of which have been designed to replicate the wheel pattern of the Huracán STO. Those Lamborghini owners will also have the chance to purchase a limited-edition helmet, jacket and leathers, all in the livery of their new ride.

Ducati has worked closely with Lamborghini on the exclusive Streetfighter’s aesthetic, with the carbon-fiber front wheel guard, fuel-tank cover, belly pan, tail bodywork and rider’s-seat section all created to mimic the design lines of the Huracán STO.

The Streetfighter V4 Lamborghini is closely linked to the 2023 Panigale V4 S. Present is the same 1,103 cc V4 motor, producing 208 hp, as is the Öhlins Smart EC 2.0 semi-active suspension, Brembo Stylema calipers and twin 330 mm discs. And, of course, all of Ducati’s famed electronics are standard fitment on the Lamborghini edition, including the six-axis Inertial Measurement Unit, Cornering ABS, traction control, wheelie and slide control, cruise control and more.

Carbon fiber is lashed rather heavily on the Ducati Streetfighter V4 Lamborghini, with the heel guards, rear-seat bodywork, TFT dash cover, ignition-switch cover, rear-sprocket protector and Akrapovič end cap all sporting carbon-fiber construction. However, we did notice the wheels are made from forged aluminum—surprising, since the wheels on the $34,500 Streetfighter V4 SP are made from carbon fiber.

Interestingly, Ducati has included a number of accessories that make it easier to configure the limited-edition bike for track use, a process that would otherwise require a trip to your local Ducati dealer. These include an open carbon-fiber cover for the dry clutch, block-off plates for both the license plate and rearview mirrors, a race-style fuel cap and a bike cover in the same color as the bodywork.

For the 63 examples made for the Speciale Clienti program, the wheels replicate the styling of those on the Huracán STO.  Giovanni De Sandre, courtesy of Ducati Motor Holding S.p.A.

Each of the 630 examples (plus the extra 63 available through the Speciale Clienti program) will have the bike’s serial number engraved on a metal plate that sits on the tank cover, and each serial number will also come up on the dash when the ignition is turned on. Interest in these rare Ducati releases has skyrocketed in recent years as they promise to become serious collectibles. In that regard, the Ducati Streetfighter V4 could be among the leaders of the pack.