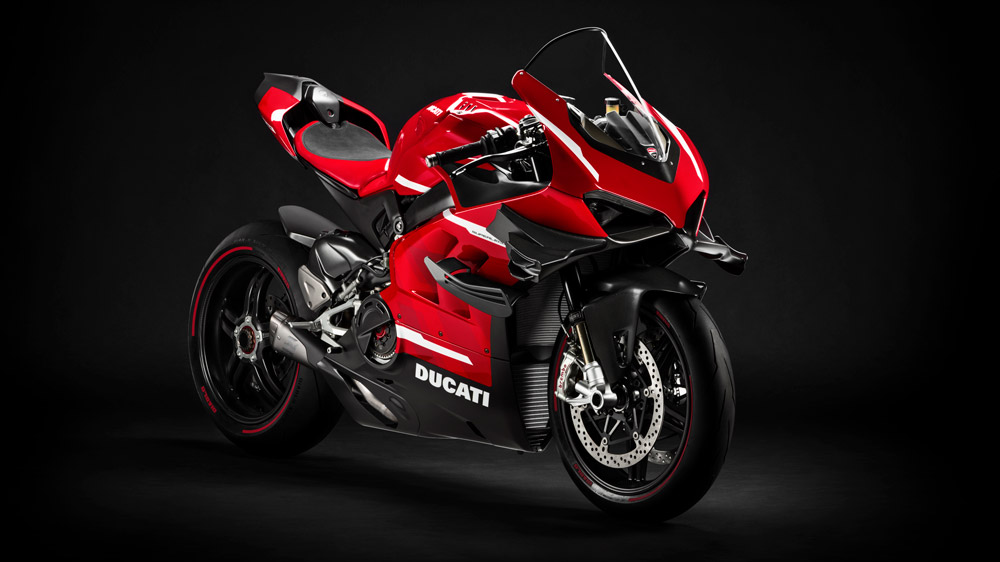 The finest of all Ducati production superbikes has just been unveiled in the stunning Superleggera V4. Resplendent in the official 2019 Ducati MotoGP team colors and limited to only 500 examples worldwide, the Superleggera V4 is special for many reasons, but one stands above all others: the extensive use of carbon fiber.

The woven black material is employed in the construction of the chassis, swingarm, wheels and bodywork, which Ducati says is a first for any street legal motorcycle. Ducati did, however, produce the 1299 Superleggera in 2017, which also used carbon fiber in the construction of the above parts, but that machine used a carbon-fiber monocoque chassis, not the twin-spar design of the Superleggera V4. But let’s not get picky here.

The use of carbon fiber for those parts means there’s a claimed 14.7-pound weight savings, for a total dry weight of just 350 pounds. That compares rather favorably with the Panigale V4 S we tested in Bahrain last week, which tips the scales at 384 pounds dry. And it gets better. When paired with the Akrapovič titanium racing exhaust that you get in the Ducati Racing Kit, the weight drops down to lithe 335 pounds dry.

Now, when considering the Superleggera V4’s 998 cc motor produces 220 hp in standard trim, but can get pumped to 234 hp when equipped with the aforementioned exhaust, you realize this is a very, very special motorcycle.

That exclusivity extends to the titanium rear shock spring that’s wrapped around a beautiful racing Öhlins shock, and the gas-charged Öhlins fork up front. It extends to the winged carbon-fiber bodywork, which produces a hulking 110 pounds of downforce at 167 mph, a claimed 44 pounds more than the V4 S. And it extends to the brakes, which now house a gorgeous MCS racing master-cylinder and Brembo Stylema R four-piston calipers. You see, even the brakes are beautiful.

The electronics are as you’d expect: the best Ducati can muster. Every Ducati algorithm has been employed—from Traction Control to Wheelie Control to Slide Control—and you get preprogramed track maps for Laguna Seca, Mugello, Jerez, Sepang and Losail to measure your split times (for the next time you go riding a MotoGP racetrack).

Yet perhaps the best thing about the Superleggera V4 isn’t the bike at all. It’s the opportunity it affords. If you’re one of the fortunate few owners, you’ll also be thrown the keys, at least temporarily, to the Panigale V4 R that Chaz Davies and Scott Redding use in the World Superbike Championship. Yes, you will be able to take it for a few laps as part of the “SBK Experience” at the Mugello circuit in Italy.

The Superleggera V4’s chassis, swingarm, wheels and bodywork are made of carbon fiber.  Photo: Courtesy of Ducati Motor Holding S.p.A.

In addition, 30 of the lucky 500 will be awarded the “MotoGP Experience,” receiving a few hot laps on the same 270-plus hp Ducati Desmosedici GP20 MotoGP machine as ridden by factory pilots Andrea Dovizioso and Danilo Petrucci. The circuit has not been disclosed for the latter, but no company has ever offered a carrot like that to its customers.

Ducati has yet to announce a price for the Superleggera V4, but don’t expect much (if any) change back out of $100,000. Deliveries are anticipated to start by June at the rate of five bikes per day.