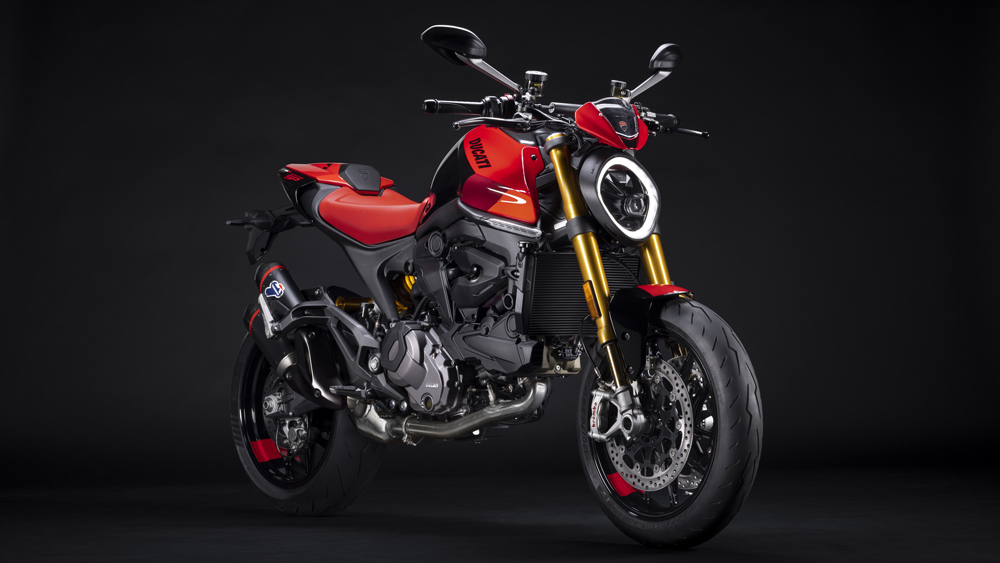 When Ducati released an all-new Monster in 2021, we were smitten. After all, the Monster is one of the Bologna-based manufacturer’s most iconic models. Now, Ducati has taken the wraps off a new version dubbed the Monster SP—a jazzed-up roadster that takes a sprinkling of the special components normally found on Ducati’s track-orientated models but adapts them for more compatibility with street use.

Initially penned by the great Miguel Galluzzi, the original Monster shocked the buying public when it was first shown in 1992 as a stripped-back, bare-bones naked bike, one that took a few design cues from the brand’s superbike range but was far more concerned with letting the good times roll, rather than the lap times tumble.

The 2021 model year saw the biggest change yet in the Monster’s history. The bike was powered by the brand’s 937 cc Testastretta L-twin that delivered a claimed 111 hp and 69 ft lbs of torque. That same engine is present in the SP, but it’s complemented by a Termignoni muffler setup that gives the SP a little extra gravitas.

Moreover, the Monster SP gets the fully adjustable, gold Öhlins NIX30 fork, which saves 1.3 pounds in weight and is the same that graces the Hypermotard SP. Another 1.1 pounds has been shaved off the braking system, which now comprises Brembo Stylema calipers and aluminum flanges for the front brake discs, while 4.4 pounds has been saved by switching to a lithium-ion battery.

The Monster SP, with a 4.3-inch screen display (in color), also sports Pirelli Diablo Rosso IV tires compared to the more road-orientated Pirelli Diablo Rosso III’s found on the base model. Dressed in a livery that represents the Ducati MotoGP team, the Monster SP comes with Sport, Touring and Wet Riding modes, as well as the base model’s suite of electronic assists. And with the latter, you’ll now get launch control included in the mix. Starting at $15,595, the Ducati Monster SP will be available at Ducati’s US dealerships beginning in February.