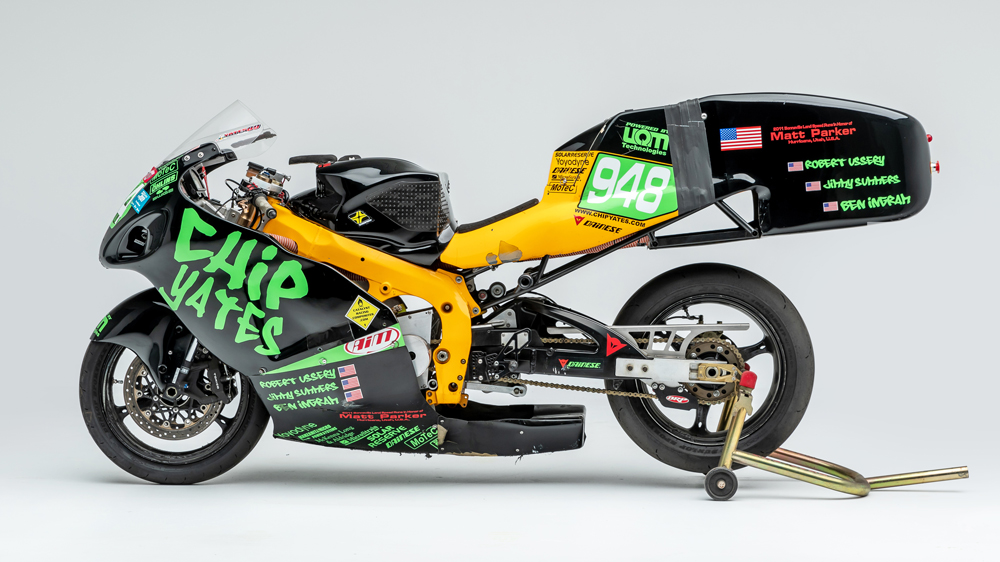 “We’re in a fascinating moment historically,” says Paul d’Orléans, a motorcycle historian and the cofounder of the Motorcycle Arts Foundation. “There hasn’t been this much activity in the motorcycle sphere—with new manufacturers popping up—probably in a century. We’re in the thick of a total revolution in terms of design and technology.”

The nucleus of that design revolution is the electric power train, and a broad cross-section of the diverse, two-wheeled forms that it has inspired are now on display at the Petersen Automotive Museum. The exhibit, which started April 6, is entitled “Electric Revolution” and is guest curated by d’Orléans, who also curated the museum’s outgoing “Custom Revolution” motorcycle exhibit. The new showcase will feature 21 examples of groundbreaking design across all two-wheeled vehicle genres—from racing machines and dirt bikes to street models, prototypes, production models, and one-off custom creations.

According to d’Orléans, the exhibit is a “representative sampling” of the industry; however, because the electric motorcycle industry is growing at such a rapid rate, “Electric Revolution” will spotlight only about a tenth of what’s currently being produced (in terms of manufacturers and specific motorcycle models).

The LiveWire by Harley-Davidson.  Photo: Courtesy of Kahn Media.

Two vehicles within the exhibit best represent this paradigm shift, according to d’Orléans: the Racer-X, a bike that’s literally shaped like an X and utilizes “outrageous” suspension and steering systems invented by the motorcycle’s creator Mark Atkinson; and Moto Undone, a modernist’s interpretation of a motorcycle designed by Joey Ruiter. “It’s essentially a mirrored cuboid with two wheels,” d’Orléans says of Ruiter’s creation. “It’s this incredible pure sculptural shape that actually functions as a motorcycle.”

According to d’Orléans, those two aforementioned examples are a critical aspect to the evolution of form that will shape the future of motorcycle design; however, contemporary electric bikes also suggest that the traditional motorcycle aesthetic won’t disappear, either. Proof of that exists in Harley-Davidson’s EV program prototypes, including the 2020 LiveWire, which will also be on display.

The Mission One electric missile.  Photo: Courtesy of Kahn Media.

Ultimately, the exhibit is guaranteed to captivate visitors thanks to the futuristic forms that will be on display, but d’Orléans hopes that is only the beginning. “I’d like people to feel as excited about what’s happening with electric motorcycles as I am,” he says. “People tend to look at electric motorcycles as not quite ready for prime time, but I think that’s completely wrong at this point. As proof, d’Orléans points to one top performer in particular. “The fastest production motorcycle in the world is electric,” he notes, alluding to the LS 218 built by Lightning Motorcycles, “and it’s built in America. The last time that probably happened was 1915.”