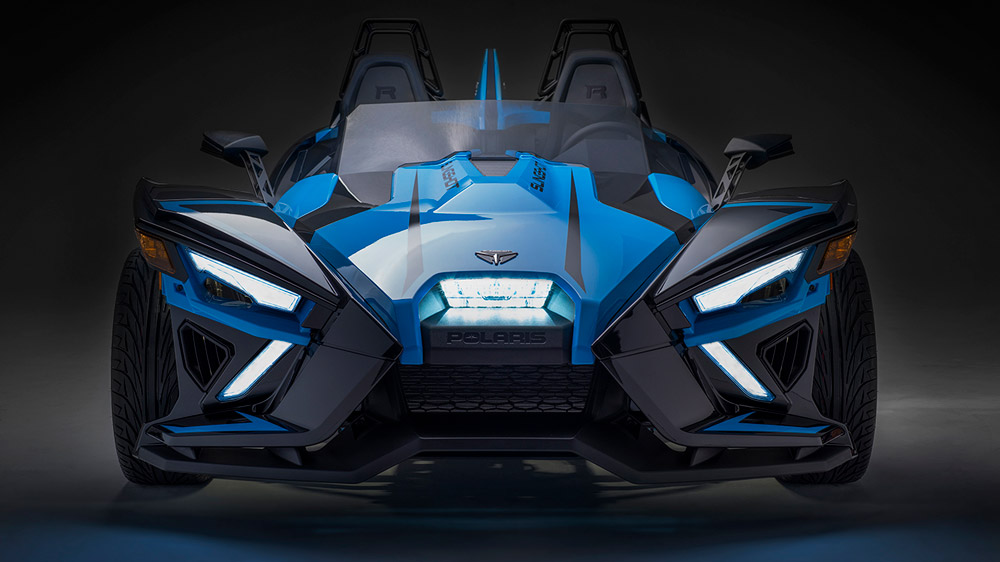 I first got acquainted with the Polaris Slingshot two years ago, taking it on an extended road trip up and down a soggy California coast. I expected to hate the vehicle but, instead, quickly grew fond of it. Technically, the Slingshot is considered a three-wheeled motorcycle, but the machine offers a driving experience more akin to a Lotus Elise without doors.

After three weeks and nearly two-thousand miles, the Slingshot ended up being one of the vehicles that most impressed me in 2018. But it wasn’t perfect. In describing the look of the seat upholstery, I called it “botched plastic surgery.” The rest of the interior didn’t look much better. Its aesthetic echoed the fact that Polaris is a well-known ATV and side-by-side manufacturer, not an established automaker.

Now, after being on the market for five years, Polaris is updating the Slingshot with 70 percent new content, part of which includes a redesigned interior, freshened exterior, improved suspension, the availability of an automated manual transmission and an all-new four-cylinder engine.

The Slingshot was formerly powered by a 2.4-liter, four-cylinder engine supplied by General Motors. The mill made 173 hp and 166 ft lbs of torque. For 2020, Polaris is now using its own four-cylinder design under the hood and, on paper, the power plant is more impressive, especially considering this is Polaris’ first four-cylinder.

Displacing 2.0 liters, the new unit makes up to 203 hp, although torque has fallen to 144 ft lbs. The lower torque output is a non-issue, however, as the 2020 Slingshot weighs just over 1,700 pounds—about 40 pounds less than last year. The company is also offering a less-potent version of its new power train that makes 180 hp and 120 ft lbs of torque. Regardless of spec, both engines redline at 8,500 rpm, which slam-dunks last year’s 7,200-rpm rev limit.

With all that power being sent via belt drive to the single wheel at the rear, the Slingshot still struggles to put power down. Finesse the loud pedal just right, though, and you’ll end up hitting 60 miles per hour from a standstill in 4.9 seconds. That’s roughly a half-second faster than last year. Top speed is limited to 125 mph.

Once you’re at speed, the extra horsepower comes in handy to make highway passing an effortless activity. Braking is also improved this year. The brakes on the base SL model are conventional vented discs at all three wheels, and they do a fine job on the street or at the track. The higher-spec Slingshot R uses two-piece brakes featuring vented cast-iron rotors with aluminum center hubs. However, regardless of whether I was driving the SL or R, after a handful of 20-minute shakedowns at Wild Horse Pass Motorsports Park near Phoenix, Ariz., neither model exhibited signs of brake fade.

The Slingshot’s steering is all new as well. With two different drive modes, “Comfort” and, you guessed it, “Slingshot,” you can now alter the heft at the wheel. But toggling through the modes, I struggled to feel the differences in effort. The steering, however, does feel much different from its predecessor. Whereas last year’s electronic rack felt like a big-kid version of the Bigfoot Power Wheels I drove when I was five years old, the new steering feels more like that found on a conventional car.

Objectively, that’s an improvement, but subjectively, it’s a wash. Last year’s steering, with its off-putting mechanical slack, was devoid of refinement. Still, I always had a good sense of where I was placing the front tires. Behind the wheel of the 2020 Slingshot, I no longer sense the slack, but now the rack feels vague. As a result, the new Slingshot is less confidence-inspiring while hustling through twisty scenic roads.

On track, it took a few laps for me to get used to the new steering, but once I got the hang of it, I didn’t mind the vague feel as much. The new rack only requires 2.5 turns lock to lock versus 3.2 for the 2019 model, so I appreciated having to move my hands less in the new car. Overall, though, I still prefer last year’s more honest and raw drivability.

New drive modes also affect throttle response, as well as the shift speed and timing for models equipped with the automated manual transmission. Alternating between Comfort and Slingshot modes, it’s easy to see how the Slingshot programming quickens shifts but, if you’re set on getting an automatic-equipped version, keep your expectations low.

The hydraulically actuated five-speed automated manual, which Polaris calls AutoDrive, excels at smooth takeoffs and well-timed, swift shifts while flat out on the track, but the new transmission is a wet blanket pretty much everywhere else.

Tooling around town, AutoDrive shifts slightly faster than a human at a commuting pace, but the power interruptions between shifts are disconcerting in the way they make your head bob back and forth.

The Slingshot’s boost in power is complemented by an improved interior aesthetic.  Photo: Courtesy of Polaris Inc.

AutoDrive completely falls apart during spirited backroad driving. A half-throttle exit out of a hairpin fails to initiate a downshift. Give the Slingshot a little more gas, and it’s like a game of Russian roulette trying to predict whether the transmission will aggressively downshift or just hold the same tall gear. It seems as though Polaris engineers only programmed AutoDrive for “paint-drying” slow or “afterburner” fast.

Most people drive somewhere between those extremes and, unfortunately, the chasm between slow and fast is where AutoDrive makes me want to pull my hair out. After 10 minutes piloting an automatic Slingshot at a medium pace, I couldn’t wait to unshackle myself and fall right into a five-speed manual model with its crisp, short throws and predictable, early clutch engagement.

What about paddle shifters? They aren’t currently offered, but Polaris is planning on introducing them at some point. They won’t solve the automated manual’s woes, but they will be a welcome improvement.

During my roughly 90 minutes of track time with the Slingshot, I was impressed with how predictably it handled. Once the tires are warmed up after the first lap, the three-wheeler exhibits a remarkable 1.02g of lateral grip. What makes it so fun is that maximum grip in turns is easily approachable. When you’re nearing the edges of adhesion, the Slingshot breaks away progressively rather than snapping off course without warning. I’m no racing driver, so I left stability control engaged. Yet even with the electro-nannies active, I could still have a little bit of tail-out fun.

With only three contact points versus the four of a typical sports car, the Slingshot is less affected by mid-corner bumps, but even if it does encounter them, the suspension soaks them up while keeping the vehicle glued to the road. Back down to a cruise, the ride is just as smooth as that of any softer-sprung sports car, but exhibits minimal body roll in spite of that softness.

One of my biggest surprises two years ago was discovering how strong the Slingshot is for daily-driver duty. The interior is spacious, the driving position is invigorating, and the seats are some of the most comfortable in the game.

You wouldn’t have known that about the previous Slingshot’s seats just by looking at them, though. Last year’s upholstery drooped off the seat frames like those distasteful $20 covers you can pick up at Pep Boys.

For 2020, the Slingshot continues to be spacious and comfortable, but now the interior looks the part. The redesigned seats appear as though they come from a mainstream automaker, and the rest of the cockpit looks more inviting, starting with the steering wheel.

Gone is the old Sparco unit, which worked great but contributed to the interior’s haphazard, aftermarket-only aesthetic. For 2020, Polaris is using its own leather-wrapped, flat-bottom design with integrated controls. Complementing the nicer steering wheel is a padded center console that helps complete the new interior’s more upscale and less thrown-together appearance. There are also more storage spots for your mobile device.

The redesigned seats appear as though they come from a mainstream automaker.  Photo: Courtesy of Polaris Inc.

The Slingshot still uses Polaris’ smart, 7-inch Ride Command system. The infotainment interface is easy to navigate, but now you can work through menus faster. The latest iteration of Ride Command is powered by a quad-core processor. The screen is brighter and better angled, too. Ride Command can be augmented with embedded navigation as an option on the base SL model, but the satellite-assisted tech comes standard on the R. Neither Apple CarPlay nor Android Auto is available, which is unfortunate, but not as much of a blow considering how easy Ride Command is to use, especially with gloves.

Exterior alterations are less evident than the changes inside, but they’re still worth mentioning. The front fascia now uses a center-mounted LED headlight flanked by four attention-grabbing LED running lights. The new lighting is surrounded by a more aerodynamic front fascia that features bodywork where there once was none. As a result, the Slingshot’s front end more efficiently routes air around the vehicle. Out back, the LED taillights get a slight redesign, while new wheels finish off the exterior updates.

Even after being significantly updated, the Slingshot isn’t for everyone. However, the new automatic transmission, as disappointing as it is, should still get the Slingshot closer to mass appeal than ever before. But the three-wheeler’s biggest selling point remains its price. The base SL starts at $26,499 and includes AutoDrive along with a 255 mm-wide rear tire. The R starts at $30,999 with the manual and $32,699 with AutoDrive. The R also comes with the higher-output engine, forged aluminum wheels and a 305 mm-wide rear tire.

It may be priced near a Mazda MX-5 Miata, but the Slingshot’s driving experience is more akin to the Ariel Atom and Caterham Seven 360, but those cars cost more than twice as much.

Five years into its existence, there’s still nothing on the market that can give you so much of a supercar-mimicking experience for such little money. The Polaris Slingshot will go down as one of automotive history’s greatest bargains, made only more enticing by its democratized transmission option and attractive upgrades. That said, if you can’t drive stick, I highly recommend learning before purchasing a Slingshot—at least until the paddle shifters arrive.