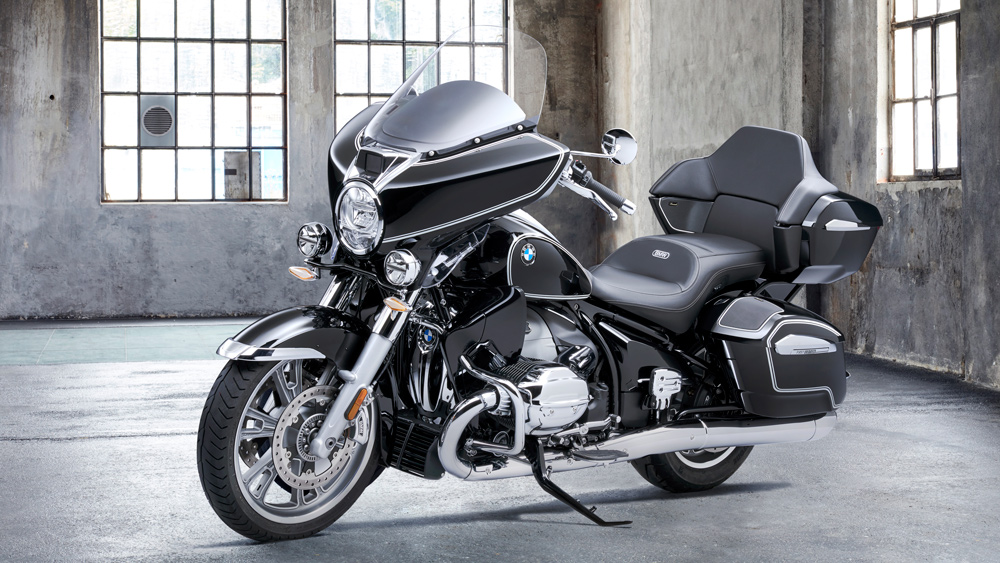 When it comes to motorcycles, BMW has built a nearly unparalleled reputation for touring models over the last half-century, but the machines responsible for it—at least in the last 20 years or so—have predominantly been four-cylinder or even six-cylinder units. That’s all about to change as the Munich bike builder introduces the new twin-cylinder R 18 Transcontinental.

Based off of BMW’s R 18 cruiser that debuted last year, the R 18 Transcontinental—with an MSRP of $24,995—uses the former’s same 1,802 cc flat-twin motor that produces 90 hp at 4,750 rpm and 116 ft lbs of torque at 3,000 rpm. Also unchanged is the double-loop steel tube chassis and 49 mm inverted-fork suspension. Yet while the mechanical components might be similar, the difference is in the details, as the Transcontinental is much more capable of covering massive distances compared to the base R 18.

To this end, you get a 6.2-gallon gas tank (a 2.1-gallon increase) and a very handy 26.9 gallons of storage capacity in the two side cases and top box that come as standard fitment.

The Transcontinental’s amenities are also impressive, with splendid leather trim for the seats and a 10.25-inch TFT display. In addition, the navigation system is matched to an audio package from Marshall Amplification that has three options: the standard two-speaker setup, a four-speaker configuration or six speakers with subs and amplifiers.

The model is equipped with an 1,802 cc flat-twin motor that produces 90 hp and 116 ft lbs of torque.  Photo: Courtesy of BMW Motorrad.

The elephant in the room, however, is the weight. Compared to the already hefty base-model R 18, the Transcontinental weighs 181 pounds more at a claimed 941 pounds ready to ride. That has the R 18 Transcontinental surpassing even BMW’s premium touring machine, the six-cylinder K 1600 GTL, by 166 pounds.

The bike features a 10.25-inch TFT display and a navigation system matched to an audio package from Marshall Amplification.  Photo: Courtesy of BMW Motorrad.

Obviously, the Transcontinental is a massive statement by BMW in multiple aspects. And the company has also unveiled a bagger version, the R 18 B, which uses much of the same components—including the motor, chassis, audio system and rider aids—but without the touring-specific luggage cases. We’ll be testing both the 2022 BMW R 18 Transcontinental and R 18 B at the national launch later this month, and will certainly share how these twin-cylinder releases stack up.