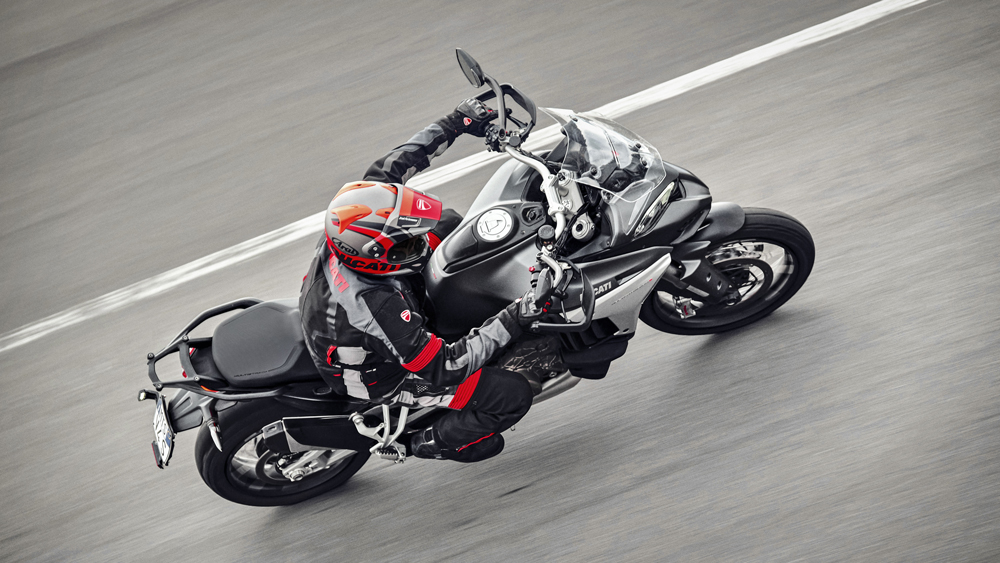 Although desmodromic valves are part of Ducati’s identity, the fitment of a conventional valve train (i.e. valve springs) was the only way Ducati could debut the Multistrada V4 with a staggering 37,282 rideable miles (60,000 kilometers) before requiring a valve service.

This is the fourth generation in the Multistrada story that began back in 2003, and Ducati is claiming 170 hp and 92 ft lbs of torque from its 1,158cc V4 Granturismo engine. And the power plant features a counter-rotating crankshaft—a first for the high-capacity sport touring category.

The Multistrada V4’s chassis is a monocoque design, mated to a traditional tubular steel trellis subframe and double-sided swingarm, with the fuel tank containing a 5.6-gallon capacity. Of course, being a Ducati Multistrada, the machine is graced with myriad electronics, including Skyhook Suspension. The latter has, for the first time, an auto-leveling function for the V4 S and V4 Sport models, which helps recognize the load and automatically adjusts the suspension setting. In addition, the bike has the usual variable rider modes, electronic suspension settings and adjustments, the Ducati Quick Shift system, Cornering ABS and LED lights with Daytime Running Lights.

But the big cherry on the Multistrada V4 sundae is the fact that it’s touted as the first production bike to be equipped with radar. The innovation also makes it the first motorcycle with adaptive cruise control and a blind-spot detection system developed with Bosch, Ducati’s technical partner.

Unfortunately, the US market will not benefit from the cutting-edge assists when the Multistrada V4 initially goes on sale, as Ducati North America is still waiting for final certification before the radar-dependent systems can be legally sold Stateside. However, the bikes will come with all the necessary hardware installed at purchase, and once the systems are approved, the customer will need to return to the dealership to have the radar activated.

The 6.5-inch dash on the Multistrada V4 S is adjusted by a joystick on the left handlebar.  Photo: Courtesy of Ducati Motor Holding S.p.A.

The numerous options available for each of the three new Multistrada V4 variants could leave even the most discerning Ducati lover with a bit of a headache. Each machine shares the same engine, chassis and base electronics. But the V4 S gains a larger 6.5-inch dash (adjusted by a joystick on the left handlebar), Brembo Stylema brake calipers and bigger 330 mm brake discs. It also benefits from Ducati Quick Shift and the Ducati Connect smartphone app for infotainment.

The Multistrada V4 will be available in January.  Photo: Courtesy of Ducati Motor Holding S.p.A.

The Multistrada V4 Sport gains all of this plus a different set of colors, an Akrapovič carbon-fiber-and-titanium muffler, and a carbon front mud guard. Each model can also be fitted with different performance, touring or off-road packages. The Ducati Multistrada V4 will be in dealer showrooms by January 2021, although price has yet to be announced.