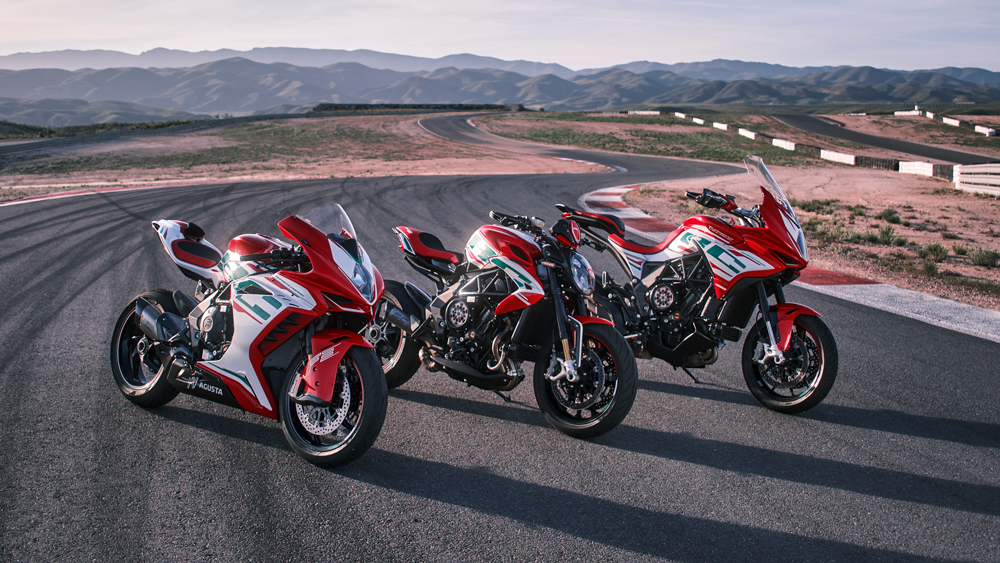 Known for its high-performance motorcycles like the Brutale 1000 RR and F3 RR, MV Agusta has always touted its racing heritage, which it has backed up in recent years with factory-supported efforts in the World Superbike and Supersport Championships, and in Moto2 via its connected effort with the Forward Racing Team. Central to these motorsport endeavors has been the select line of limited-edition production RC bikes. In the case of the discontinued (sadly) F4 RC, for example, it was developed for homologation so that the Italian manufacturer could legally race in the World Superbike Championship.

The RC moniker stands for Reparto Corse, which fittingly translates to “Racing Department,” and while the halo F4 RC has been confined to the history books, the brand is keeping the two-letter descriptor going by releasing three new RC editions for 2023. The F3 800 RC, the Dragster RC SCS and the Turismo Veloce RC SCS all use the same 798 cc inline three-cylinder motor and base chassis, yet each variant represents a different wing of the performance market that the brand is trying to capture.

Recent rule changes to the World Supersport Championship have allowed MV Agusta’s F3 800 to be formally included in the series, with the bike builder fielding young Italian Mattia Casadei and rising Turkish star Bahattin Sofuoglu, so we’re not surprised that the F3 800 gets the most extensive of the RC treatments.

The new $28,498 F3 800 RC is emblazoned in the home nation’s gorgeous tri-color paint scheme and features a new titanium exhaust system from Slovenian company Akrapovič. With this power plant and exhaust setup, MV Agusta is claiming a 17-pound weight reduction for the F3 800 and a peak output that’s now at 155 hp.

The F3 800’s agility has also been improved thanks to a 10 percent reduction in wheel mass. In addition, the Marzocchi fork uses a different coating to reduce friction under heavy loads. As with its base model, the F3 800 RC utilizes inboard winglets on either side of the carbon fairing, producing 17 pounds of downforce, and MV has given the bike a touch more stylistic distinction by fitting CNC-machined clutch and brake levers.

The Dragster SCS and Turismo Veloce SCS models are inherently different from the F3, not just due to the latter’s competition-inspired nature but to the fact that the other two both run the Smart Clutch System (SCS). Developed by the off-road specialists at Rekluse, the SCS essentially makes the clutch lever obsolete, allowing the rider to forgo using the clutch for everything from gear changes to starting and stopping. In a way, the SCS turns the Dragster and Turismo Veloce into massive scooters.

The Dragster RC SCS also gains a new exhaust system, this one from SC Project. The titanium work on this pipe is exquisite, the hand-welded metal snaking away underneath the motor and looking like something ripped straight from the MotoGP World Championship. As for the Turismo Veloce RC SCS, the only difference between this and its base model is the tri-color paint job—oh, and an extra $5,300.

MV Agusta will create 200 examples of the F3 800 RC and 300 each of the Dragster RC SCS and Turismo Veloce RC SCS. Exactly how many will make it to North America has yet to be determined, but deliveries are expected to begin at the end of this year.