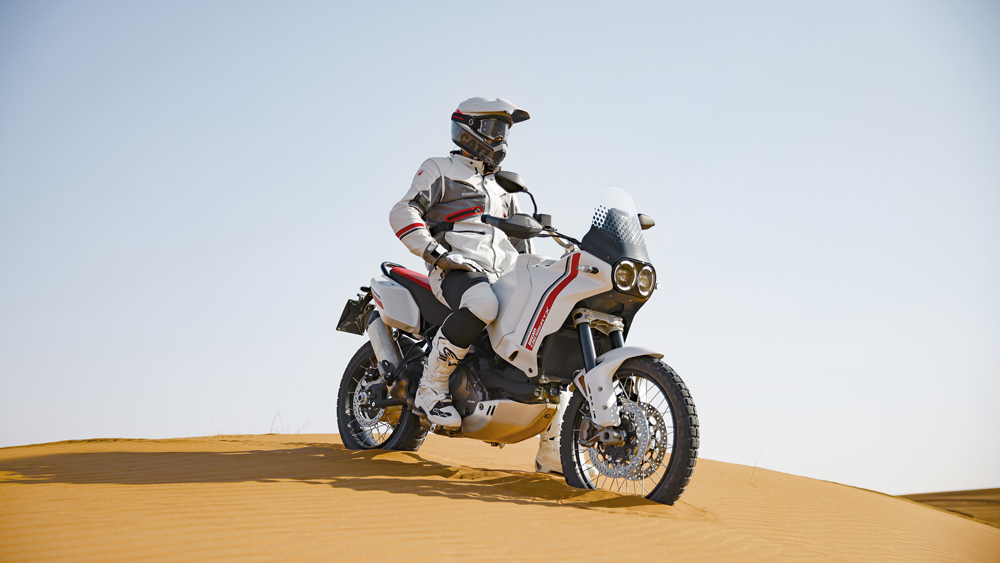 In the last two years, we’ve seen the motorcycle industry’s mid-size ADV market become exponentially popular. Class stalwarts KTM and BMW have been joined by Yamaha (with the Tenere 700) and Aprilia (with the Tuareg 660) and, on top of that, MV Agusta has recently announced its intent to join the fray. Not to be left out, Ducati has now unveiled its all-new DesertX.

First revealed in prototype form at November’s EICMA Show in Milan, the DesertX will be powered by the same 11-degree Testastretta Desmodromic L-twin currently found in the Monster, with a revised gearbox that houses a shorter first and second gear for more controlled, slow-speed off-road riding, but a taller sixth gear to help save fuel on freeway commutes.

Ducati is claiming 108 hp at 9,250 rpm and 68 ft lbs of torque at 6,500 rpm—all in a package that weighs 492 pounds with a 5.5-gallon tank of gas. Ducati has also developed an auxiliary tank that adds an extra 2.1 gallons to the equation and is activated after the main tank reaches a certain level of remaining fuel. A signal is then sent via the dash to the rider, warning that it’s time to switch tanks. That cumulative 7.6 gallons puts the DesertX way ahead of its class rivals and nearly on par with maxi-ADV machines like the BMW R1250 GSA and Triumph Tiger 1200, who both boast a capacity of 7.9 gallons.

Ducati’s trademark steel trellis chassis is mated to fully adjustable Kayaba suspension, with Pirelli providing its Scorpion Rally STR rubber for the 21-inch front wheel and 18-inch rear wheel. And as you’d expect, there’s every Ducati bell and whistle when it comes to the electronics, like an IMU, traction control, wheelie control, engine brake control, cruise control, a quick shifter and a 12-volt USB power socket.

Ducati’s style department has scored a couple of points in our book for the DesertX’s aesthetic, one that channels the Paris-Dakar racers of the 1980s. Big, brash and very reminiscent of the Cagiva Elefant (sic) that was powered by a Ducati 900 cc air-cooled motor during the race’s glory years, it’s still nonetheless a thoroughly modern design with its LED light system featuring a Daytime Running Light. Interestingly, there are now three bikes recently announced (the MV Agusta 5.5 and 9.5, along with this Ducati) that are modeled on the Elefant, as each can lay legitimate claim to the iconic model’s heritage.

The DesertX’s aesthetic channels that of the Paris-Dakar racers of the 1980s.  Photo: Courtesy of Ducati Motor Holding S.p.A.

Of all Ducati’s six announcements for the 2022 model year (the Multistrada V2, Panigale V4 S, Scrambler 1100 Tribute, Multistrada V4 Pikes Peak, and Streetfighter V2), we’re most excited about the DesertX. Albeit, the decision of which mid-size ADV steed to choose has become that much harder. Starting at $16,795, the DesertX will be available on dealer floors in May.