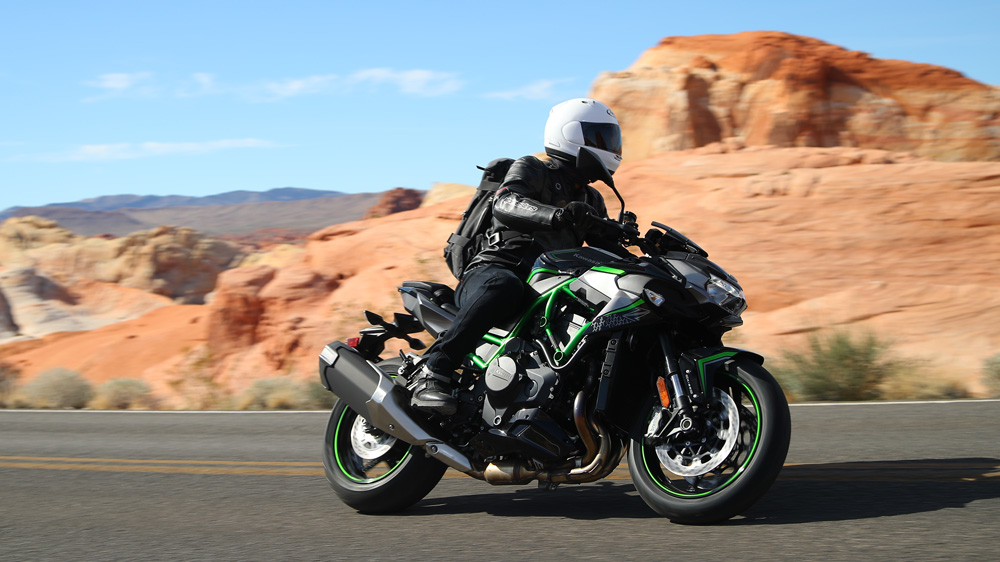 You hear the rattle of the 2020 Kawasaki Z H2’s supercharger just as you roll off from another throttle-induced time warp. Your eyes begin to readjust—peripheral vision slowly returning. A Ducati Streetfighter growls, an Aprilia Tuono 1100 roars, but Kawasaki’s Z H2 rattles and hisses in much the same way certain venomous snakes announce their presence. But twisting the throttle hard on this bike is a dangerously addictive experience, and few motorcycles offer this kind of high.

With a claimed 197 hp from its 998 cc inline four-cylinder motor, the Z H2 is more than racetrack-fast. It feels fighter-jet fast, which is just as well, considering this is as close to flying as you’ll ever get without wings. There are four riding modes to increase or decrease the acceleration force, as well as three-level traction control, an IMU and Kawasaki’s Corner Management System (similar to Cornering ABS in that it helps maintain chassis balance when braking while leaned over). Performance is also enhanced by Brembo brakes, cruise control and an ultra-smooth quickshifter for clutchless gear changes.

Admittedly, the bike’s looks are not for everyone. Indeed, I struggle to appreciate the bulky front that houses the supercharger’s intake and the massive front headlight when I match it to the svelte and pointy rear end. The riding position is also on the cramped side if you’re more than six feet in height. It also has a narrower stance, offered by the one-piece handlebar, that I’d have cared for. However, shorter riders should find less issue with this than I did.

What did fit me just fine, however, was the machine’s unusual combination of beastly power and highly civilized handling at moderate speed. With 101 ft lbs of torque, it allows you to cruise around all day in fifth gear and never go past 70 mph, letting the Z H2 chug from corner to corner. It would be entirely reasonable to consider the model a nearly 200 hp commuter, yet this would be missing the point.

Starting at $17,000, the Kawasaki Z H2 is about going extremely fast, in comfort. It’s a unique statement piece that showcases Japan’s ability to create motorcycles with genuine personality, a quality so very difficult to manufacture. The menacing, supercharged rattle alone is proof of this.