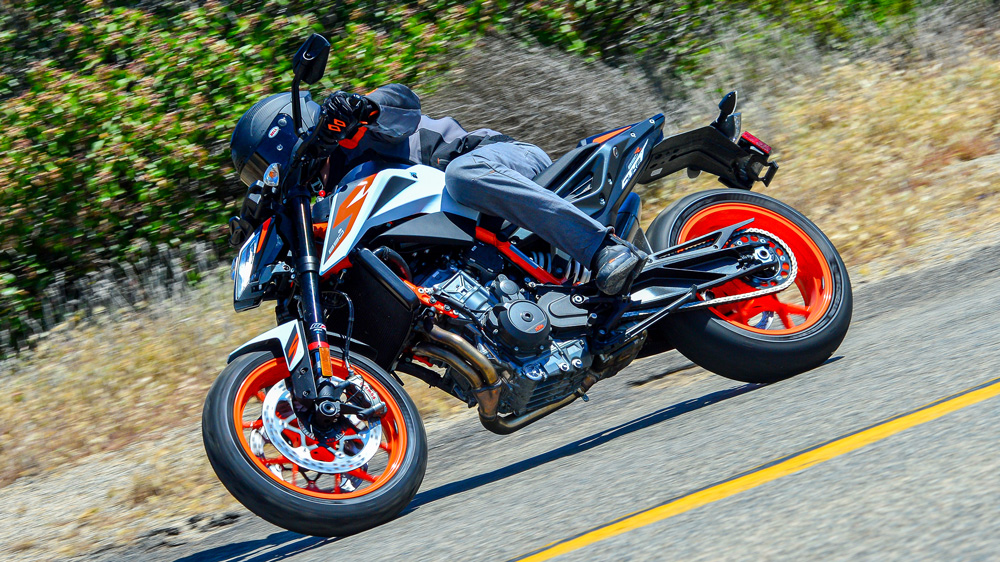 The 2020 KTM 890 Duke R is sure to become a fast favorite in the naked-bike niche. But it’s not a replacement to the 790 Duke, which will still be available at KTM dealers nationwide. Instead, the 890 is a new platform for the Austrian powerhouse, one that closely mimics the characteristics of the 1290 Super Duke R we tested in Portugal earlier this year—albeit in a smaller, lighter package that’s easier to ride compared to the brutish 1290.

At the heart of KTM’s 336-pound (dry weight) performer is an 890 cc parallel-twin-cylinder motor pumping out a claimed 120 hp and 73 ft lbs of torque. KTM has graced the Duke R with four individual riding modes, nine-stage traction control (when you purchase the Track Pack option), Cornering ABS from Bosch—matched to the same Brembo Stylema brakes as on the 1290—optional cruise control and the KTM Quickshift+ system for clutchless gear changes.

When it comes to the chassis, the 890 is an evolution of the steel-trellis design found on the 790 Duke, but with the swingarm moved up in the frame to provide better anti-squat properties (when you’re aggressive on the throttle) and to increase ground clearance. The rider now sits in a more race-oriented position than on the 790, with the one-piece bar moved lower, the seat 0.3 inches taller (at 32.8 inches) and the foot pegs moved rearwards and higher on the frame.

Up front, the suspension has been upgraded from the 790’s non-adjustable fork giving way to a WP APEX 43-mm unit that houses both rebound and compression damping adjustment, while the WP shock at the rear is fully adjustable.

The 120 hp model is a new platform for KTM.  Photo: Courtesy of KTM AG.

The mid-weight 890 is the kind of street bike we need right now. Supremely agile, it changes direction like a welterweight boxer, yet still has the stability that belies its lithe size as you load up that front Michelin Powercup II tire. The power on tap is more than enough to put you on the wrong side of the law if you’re not careful, yet its table manners at traffic speed are impeccable. And gone are the days of KTM’s suffering through horrendous fueling issues—the 890 is a study in fuel-injection smoothness and deft throttle control.

Track mode unlocks greater performance and allows for the anti-wheelie control to be switched off.  Photo: Courtesy of KTM AG.

As you ride up through the four ECU modes of Rain, Road, Sport and Track, the 890 becomes progressively angrier. Sport is, in our opinion, the optimal for street performance. In the latter mode, however, you cannot adjust the traction-control intervention. That can only be done in Track mode, which also unlocks all the performance hidden in the motor, and allows for the anti-wheelie control to be switched off.

The 2020 890 Duke R retails for $11,699, but that’s before you start aftermarket shopping. Another $339 will unlock the Track Pack, another $399 for the Quickshifter+ and $249 for the optional cruise control. If you’re in the market for an 890, get it all. The ride, with everything switched on, is nothing short of exceptional.