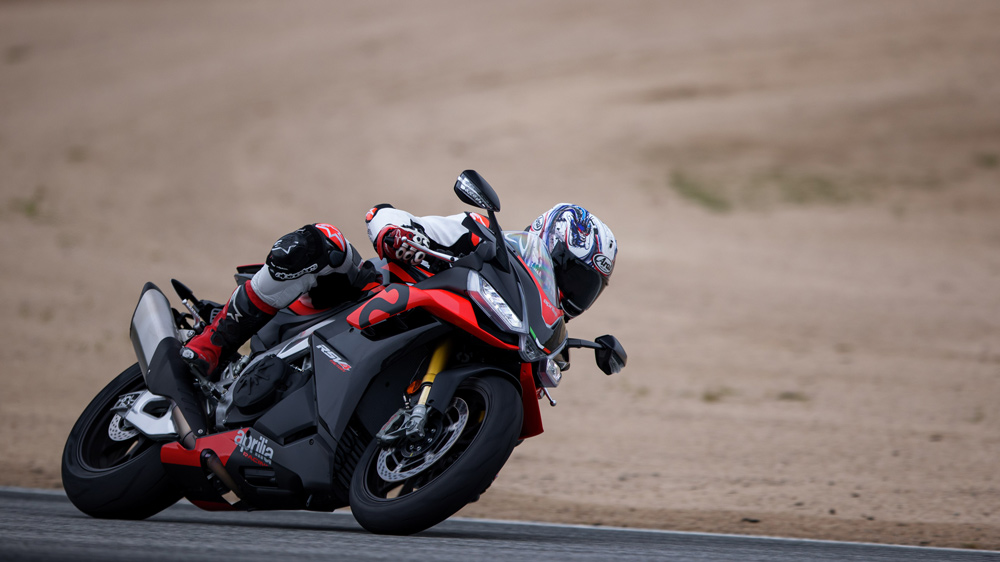 Sheer, brute force. That’s the best way to explain the power delivery of the 2021 Aprilia RSV4, fit with semi-active Öhlins suspension and forged aluminum wheels. Increased from 1,078 cc to 1,099 cc for 2021, the model’s V4 motor delivers the kind of acceleration that pushes one’s eyes deep into their sockets. It’s a confronting experience, as my mind and body try to keep up with the Aprilia’s movements while rocketing toward the daunting, uphill turn one at WeatherTech Raceway Laguna Seca.

In keeping with tradition, the 2021 Aprilia RSV4 and RSV4 Factory, priced at $18,999 and $25,499, respectively, are not ground up redesigns of the model that first blew the doors off the industry back in 2009. Every iteration that has since come from Aprilia’s factory in Noale, Italy, has been an evolution of the original, the first motorcycle to take 250 cc Grand Prix thinking and apply it to production chassis design to create one of the most nimble, agile and superlatively quick superbikes of the modern era.

Aside from a capacity increase, the new motor gets a lighter crankshaft to deliver more momentum to the tire, and quicker. Aprilia claims the model makes a rocking 217 hp at 13,000 rpm, and 92 ft lbs of torque at 10,500 rpm—brain-numbing numbers by any measure. The very loud power plant is kept in check by a revised chassis, aerodynamics and electronics package that pulls the magic trick of making the RSV4 and RSV4 Factory both easier to ride and faster than their predecessors.

Taking a turn on the RSV4 at WeatherTech Raceway Laguna Seca.  Photo by Larry Chen, courtesy of Aprilia.

The new underslung swingarm, never before used on a production Aprilia, is modeled on the same one used for the RS-GP MotoGP machine piloted by Aprilia pro racer Aleix Espargaró. It’s also an impressive 30 percent stiffer than the conventional unit on the 2020 model. The result is that the RSV4 corners with impressive stability and poise, and lets you know precisely what the rear Pirelli is doing at every stage of the corner, be it braking, mid-corner or feeding the V4 beast on acceleration.

The 2021 Aprilia RSV4.  Photo by Larry Chen, courtesy of Aprilia.

Aprilia has really gone to town on the aerodynamics for the RSV4. New LED lights, similar to those on the RS 660, adorn the front of the bodywork, while revised downforce winglets on both sides of the fairing help keep the front wheel down under acceleration and increase braking stability when it’s time to heave on the Brembos.

A wider windshield and an increased area for your chin to sit on when in a full tuck has been developed, which make these latest bikes far more comfortable and less tiring to ride. To that end, the engineers have lowered the seat height by .35 inches and the footpeg position by .39 inches, while giving you an extra 1.5 degrees of ground clearance when cornering.

When we tested the RS 660 last year, one thing we noted was you could adjust your engine braking control, something you couldn’t do on the RSV4 at the time. That has changed. The RSV4’s Aprilia Performance Ride Control (APRC) electronics suite is now up there with the very best. The new 5-inch TFT dash offers three preset riding modes and three programmable modes in which you can alter everything from engine braking to traction, launch and wheelie control, Cornering ABS, slide control and cruise control. Aprilia has also developed an all-new quickshifter for utterly seamless full-power gear shifts.

Firing down a straightaway on the RSV4 Factory.  Photo by Larry Chen, courtesy of Aprilia.

Aprilia’s engineers have thus made it so that you can tailor your ride as much as possible this side of a professional racing grid. And if you go for the RSV4 Factory, you can throw in the Öhlins Smart EC2 semi-active suspension as well. The base model comes with Sachs fully adjustable units, which we must admit were brilliant at Laguna Seca, offering excellent stability without the feeling that the computer was telling you what you need before you need it.

The new RSV4 features a wider windshield and an increased area for your chin when in a full tuck.  Photo by Larry Chen, courtesy of Aprilia.

Both machines come with the same-spec V4 motor and general twin-spar aluminum chassis, only the RSV4 Factory’s wheels and suspension, plus the colors, separate the two. Oh, and the small matter of a $6,500 price difference. The base RSV4 (formerly called the RSV4 RR) used to be the poor relation to the Factory variant, but the difference in performance now is nowhere near as wide as it was. The RSV4 corners so well that it makes for a very compelling argument to choose it. However, you can’t go for the Factory’s classic Aprilia red and purple colors, nor can you get the red-and-black scheme more synonymous with Aprilia’s most recent race history, so that may be a turn-off for potential buyers.

Regardless of what version RSV4 may be on your radar, the great equalizer is the ride. Both machines are quite simply stunning pieces of Italian craftsmanship. With an incredible motor paired with a chassis that damn near talks to you, this next generation advances the RSV4 legacy with more power and sophistication than ever before.